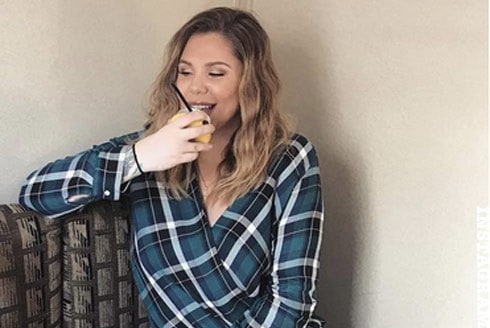 It is being reported that Teen Mom 2’s Kailyn Lowry is pregnant.

Radar Online is citing sources close to Lowry who confirm that the mother to sons Lincoln with Javi Marroquin and Isaac with Jo Rivera is once again expecting.

Rumor, as it often does with the moms of the Teen Mom franchise, has been circulating about the possibility of the 24-year-old being pregnant. In January she tweeted out a pic of a baby and confessed that she had changed her mind about maybe having more kids.
—

UPDATE: E! News is now confirming that Kail is pregnant. On the whole E! is more close to the vest than Radar with making outright proclamations so this would seem to indicate that Radar’s report is accurate.

UPDATE 2: Well we can all stop with the speculation as Kail Lowry has confirmed to The Ashley that she is indeed expecting. She said she was about half-way through her pregnancy adding, “I know this isn’t the ideal situation, but those close to me have been very supportive and understanding.”

To find out what else Lowry had to say about the big news including how she wasn’t shocked about when she found out and how she was actually hoping to conceive, check out The Ashley’s exclusive interview here.

Here’s Kail’s own words from her blog:

I am pregnant. I’m sad that I should have known that people in my life would sell me out before I was ready. Like any normal person, I want it to be a happy time. I wanted this to be a private time so I could be excited while not getting chased by paparazzi and bothered with crazy headlines. Please know this was a choice I made, I already know some won’t agree but I’ve been showered with support by the ones I love since I found out. Why did I wait? I’ve had a lot of health complications leading up to this pregnancy and I was not ready to release such private information on my own just yet being that I am so high risk with this pregnancy. I didn’t want to announce just to have another miscarriage and suffer through another grief.

Of course, I was filmed on the show saying I didn’t want any more kids but I’m pregnant again. I know so many will have comments on this but here’s the thing — I didn’t want to bring another child into a failing marriage. Shortly after I started having complications, the option of having more kids was almost taken away from me. When I started thinking long and hard, I knew I wanted more. This was the choice I made. This is the baby I thought I wasn’t sure if I could have. I know this isn’t an ideal situation but I know everything will be okay. And like I say in my book — with a little bit of hustle and heart, I can and I will survive anything. Having another child is something I am so happy about and I just can’t wait. My boys are so excited, those who love me are so excited, and I hope that everyone can just be happy for me during this time.

Kail added that Jo Rivera has known for a while but that she did not have the opportunity to tell Javi Marroquin. She’s going to wait until birth to find out if it’s a boy or girl and there’s no official word yet on who the father is.

She later backed that sentiment during a Teen Mom 2 after show when she said that she’d be open to another baby. Fans also chimed in on a couple of social media shares and her appearances on the after shows, arguing that it looked like she had a baby bump. Kail replied that she had gained a little weight.

These sources went on to tell Radar that the father is the mystery man that Javi caught in their home as revealed in an episode from earlier this season.

Kail and her rep both denied Radar’s report. Lowry has yet to directly comment one way or the other since the post.

TEEN MOM 2 Jenelle Eason and mom Barbara Evans do yoga together, The Land may expand to other states