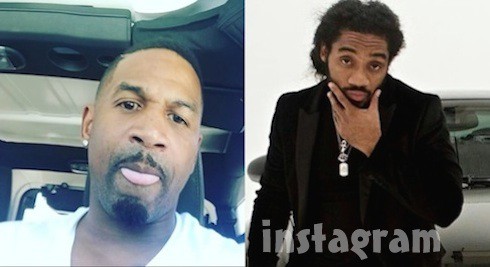 Is Scrapp DeLeon Stevie J’s son? The fatherly advice that Stevie J recently gave Scrapp during the Karlie Redd situation raised the eyebrows of many a Love & Hip Hop Atlanta viewer–and Karen King’s sketchy past has people wondering if she ever ran into Stevie J back in the day.

In one of his final scenes before leaving for prison, Scrapp and Stevie J sat down to talk about their encounters with Karlie Redd. Stevie wound up sounding particularly fatherly about the whole situation, and got the rumor mill rolling on the whole “Is Scrapp DeLeon Stevie J’s son” question. Check out the scene for yourself:

Scrapp explains that Karlie left proof of her and Scrapp’s dalliance in her car, and that Scrapp’s girlfriend Tommie discovered the proof. In Stevie’s mind, it’s Karlie who’s at fault: “She left that on purpose, man,” he says. “She’s messy. I had a couple run-ins with her. I would be careful if I were you. She’s a troublemaker.”

Scrapp couldn’t agree more: “This doesn’t sound like a tree I wanna bark up,” he says, particularly because he has “a nice little vacation” coming up.

The two men clearly have a connection–but is Scrapp DeLeon Stevie J’s son? If so, that reveal would be one of the biggest bombshells in Love and Hip Hop history, regardless of the franchise. And the chronology does, technically, work out: Stevie J’s birth year is 1971, and Scrapp’s is 1991, meaning that Stevie was definitely old enough to have fathered Scrapp. And, although Stevie was raised in upstate New York and got his start in the music business working for Bad Boy Records out of New York City, he could easily have visited Karen’s stomping ground of Los Angeles any number of times in the early 90s.

We also know is that Lyndon Baines Smith, the ex-lover who Karen King allegedly tried to have killed, confirmed that Scrapp is not his son. He said as much in a recent interview, explaining that  he fathered Scrapp’s half-brother Sas with Karen, and that Scrapp was already two years old when Sas was born on June 2nd, 1993.

There’s one other thing that might be worth pointing out. In our recent article on the number of kids (and baby mamas) that Stevie J does have, we noticed an irregularity in a VH1 feature on the topic. According to VH1, Stevie J has six kids–but their own article only listed five. (Those five, in descending chronological order, are Steven Jordan Jr., Sade Jordan, Savannah A. Jordan, Dorian Jordan, and Eva, his daughter with Mimi Faust.) For a minute, it seemed that the phantom sixth child might be his secret love baby with Promise B Mae…but, if a leaked clip from later in the season is legit, it turns out that Stevie and Promise never actually had a child together.

So, while we can’t confirm any blood relationship between Stevie J and Scrapp DeLeon, it looks like it’s at least possible that the two are, potentially, related. And, if they are, wouldn’t that just make sense, given how over-the-top crazy the rest of LHHATL Season 5 has been?)

How many kids and baby mamas does Stevie  J have? Complete list & photos of each

MUG SHOT LHHATL When is Scrapp DeLeon getting out of prison?