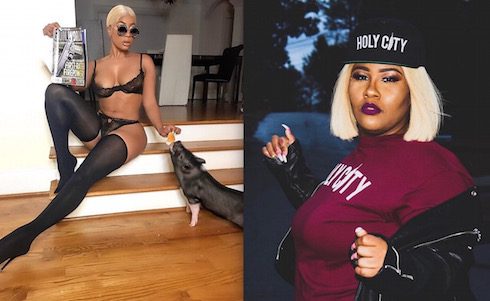 At this point, Love & Hip Hop Atlanta‘s Tommie is as well-known for her temper and willingness to brawl as she is for anything else. But did Tommie get beat up in the studio last night? Rising Atlanta rapper Akbar is claiming she had to put a beatdown on Tommie last night, due to Tommie’s disrespect while Akbar was trying to lay down tracks.

Fameolous was the first to report on the allegations. According to their take, Akbar “was in the studio trying to lay down her music when Tommie” — who was just arrested once again, this time after brawling with a jewelry store employee in Atlanta’s Lenox Square Mall — continuously interrupted her studio session.” Akbar then “became upset & beat up Tommie,” though exactly what she supposedly did remains an open question.

While we can’t yet confirm that Tommie did or didn’t get beat up in the studio, we can point out an interesting connection between Tommie and Akbar. Akbar’s most recent IG updates before her alleged fight with Tommie (and the ongoing fallout, which we’ll get to in a second) do indeed show her in an Atlanya recording studio, working with Tay Da Producer. And, though he doesn’t post on his own IG nearly as often as Akbar, Tay’s most recent update shows him working at Atlanta’s Means Street Studio in early 2018 with none other than Tommie.

So there is a music industry connection between Tommie and Akbar, even if it might be a bit tenuous. But did Tommie get beat up in the studio just because she and Akbar share, or have shared, a producer? Again — it’s premature to say, so we’ll just let Akbar’s social media escalation take over.

First of all, here’s the first thing she posted after the alleged fight:

Shortly thereafter, she followed up with a photo of Tommie and a caption describing a bit more of their supposed fight (which, we have to say, sounds pretty one-sided). We’ve screencapped Akbar’s post and cut and pasted the caption beneath just in case she decides to delete the original: 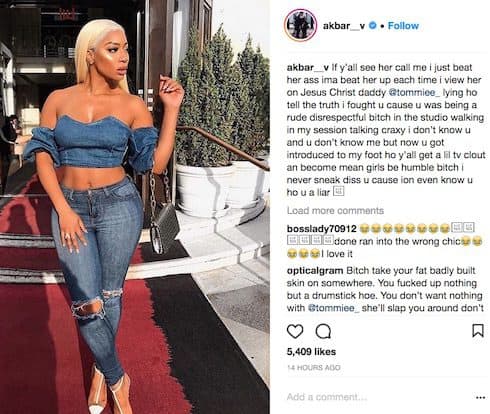 If y’all see her call me i just beat her a$$ ima beat her up each time i view her on Jesus Christ daddy @tommiee_ lying ho tell the truth i fought u cause u was being a rude disrespectful b!tch in the studio walking in my session talking craxy i don’t know u and u don’t know me but now u got introduced to my foot ho y’all get a lil tv clout an become mean girls be humble b!tch i never sneak diss u cause ion even know u ho u a liar ?

Next, Akbar shared a video of herself waking up this morning and laying into Tommie with a verbal onslaught that you really have to hear to believe. I’m not even going to try to transcribe Akbar — do yourself a favor and listen to her instead:

I’m in #safemode still in the hood riding round speaking to my people @heavy24ent ??? #BigMaMa

Tommie apparently responded to Akbar’s claims with a makeup-laden social media video of her own, but she seems to have deleted it at some point over the past few hours. Bear in mind, though, that she’s dealing with Akbar’s allegations at the same time that she’s brawling with both her mom *and* her sister Versace. That’s enough to make anyone’s head spin:

(Photo credits: Did Tommie get beat up in the studio via Instagram; h/t to Fameolous)