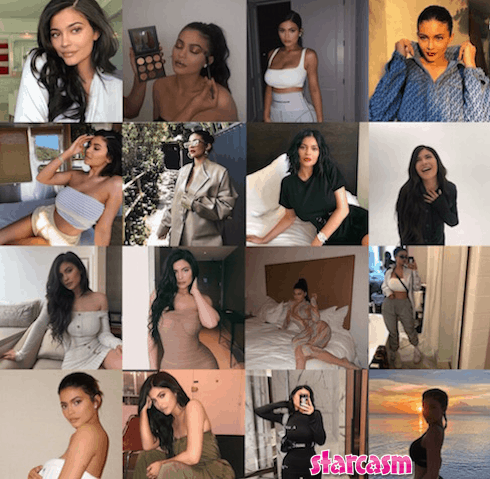 Consider two facts about Kylie Jenner. The first is that she’s still on track to become a billionaire way before anyone would have thought. The second is that she, as of this writing, has one-hundred and fifty-six million (156,000,000) followers across the three biggest social media platforms: 21 million on Facebook, 25.6 million on Twitter, and 110 million on Instagram.

Kylie’s IG following alone makes her the world’s most sought-after brand for advertisers, and they’ve been paying more and more over the last few years. Just how much does Kylie Jenner make off Instagram? The flat amount, though staggering, is only a small percentage of her vast and growing fortune. And, as we’ll explain, the real value of Kylie’s Instagram page comes in the form of free advertising for her own business.

Earlier this year, social media insight firm D’Marie Analytics announced that Kylie had overtaken Beyonce and become “the highest-valued influencer currently on social media.” Though at the time the announcement was widely misinterpreted as suggesting Kylie Jenner gets $1,000,000 per promoted social media post, what it actually said was that Kylie’s “ad equivalent value [was] over $1,000,000 per post across her social media portfolio.”

In other words, a paid social media plug from Kylie Jenner was worth the equivalent of one million dollars in traditional advertising. (By comparison, the cost of a 30-second commercial for each of the last two Super Bowls was $5 million.)

D’Marie’s report also noted that, at the time, Kylie’s posts across all platforms were receiving an average of 1,192,372 “engagements” — a like, a comment, a share, or a related mention. If we balance that average against the million-dollar figure above, we can assume that Kylie’s posts are worth approximately eighty-three cents per engagement. (If you want to be really picky, the exact figure is $.83866, which rounds up to eighty-four cents each. In the interest of erring on the side of conservative estimates, we’re going to stick with eighty-three.)

As far as hard cash payments go, the latest available information, though a bit outdated, nonetheless points toward a clear upward trend. A 2016 Forbes report on the Kardashians’ social media earnings noted that “Kourtney, Khloe, and Kim” — then the most-followed family members — were likely making between $200,000 and $300,000 per post.

And so: How much does Kylie Jenner make off Instagram today?

Kylie will overtake her by the end of the year, but for now Kim Kardashian still has the most Instagram followers in her family. Yet where advertisers are concerned, Kylie is the bigger draw: as we recently noted, Kim is no longer the influential powerhouse she once was, and Kylie’s followers are far more likely to engage with her posts.

Even keeping that distinction in mind, we thought the average number of engagements implied by the D’Marie Analytics report seemed a little low. A casual glance through Kylie’s most recent Instagram updates confirms that 1,192,372 engagements per post is actually a drastic under-rating of her power: Kylie’s likes alone regularly land in multi-million territory, and that’s not even considering other forms of engagement.

So we went back through Kylie Jenner’s Instagram and noted every instance of an advertisement over the past three months, from April through June of 2018. There are fewer than you might think: we found a total of eleven clearly paid or sponsored posts, on seven different dates:

–One for FashionNova on April 14th;
–Five separate posts for Evening Standard Magazine on May 1st, in conjunction with a cover feature on Kylie;
–Two separate posts for Alexander Wang on May 8th, following Kylie’s appearance at the Met Gala;
–Another for FashionNova on May 23rd;
–Another for Alexander Wang on June 17th;
–and one for Vogue Magazine on June 28th, thanking them for hosting / commissioning a 10-minute Kylie Cosmetics makeup tutorial.

Plus, brands know there’s an allure to advertising with Kylie. She doesn’t do paid posts nearly as often as she used to (Forbes‘ 2016 article noted she was sharing them at a rate of eight per month); in 2018, Kylie is a much larger figure, and plays on a less-crowded field.

Given those numbers, it seems ludicrous in the best case to assume that Kylie Jenner, the most influential social media user in the world, would even get out of bed for the 2017 upper-level estimate of $500,000 per paid Instagram post. Frankly, it doesn’t seem irresponsible to estimate that Kylie is now charging well over $1 million per post. And if that’s so, then Kylie Jenner makes at least $2 million every month just from Instagram ads. That’s at least $24 million per year — or about 700% more than she did just two years ago.

Figuring which posts are legit ads can be tricky

We should add one caveat. Starting last summer, the Federal Trade Commission issued a new set of guidelines for social media influencers in an attempt at helping viewers better determine which posts were actually advertisements. As Ad Age put it, influencers were “supposed to signal when they are being paid via hashtags on their posts that say #ad or #sponsored, but many use less-obvious tags like #sp — or simply fail to note the relationship at all out of concern they’ll appear inauthentic.”

But the new rules featured plenty of potential loopholes. Later.com‘s helpful breakdown of how to properly denote a sponsored Instagram post revealed what might be the most frequently abused of these: while an ad’s caption is technically supposed to include either the hashtag #ad or #sponsored in a place “easily noticed and understood by users,” an influencer could skip using either of those hashtags — and circumvent the peril of appearing inauthentic — by simply tagging the brand in the photo itself, and then noting the brand in the caption.

This may sound like an obvious way of signaling a partnership, but, when you do it Kylie-style, it’s actually the most subtle method of all. The rule presumes that an influencer will “disclose that relationship in the caption of the post” by tagging the company and offering thanks or openly plugging its product. What Kylie Jenner often does is simply…make the company’s handle the entire caption. 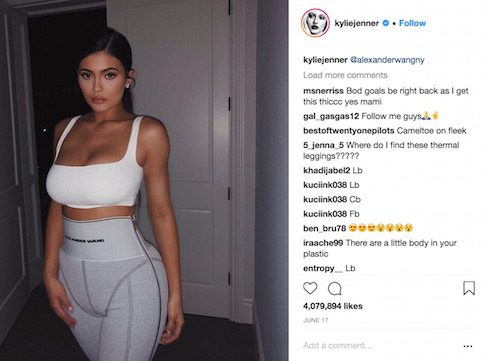 By contrast, here’s Kylie’s May 23rd, FashionNova-sponsored post, in which the company is tagged in both the photo and the caption: 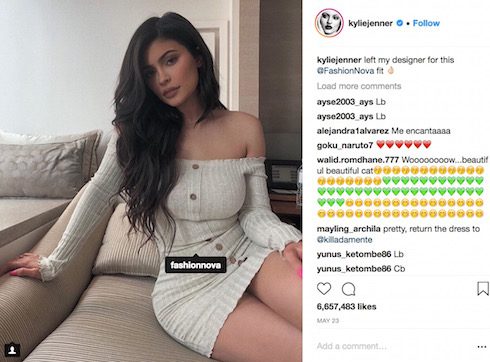 In any case, it’s worth noting that the FTC doesn’t appear to care too much about whether influencers follow its latest rules. A recent study by Instagram photo printing company Inkifi revealed that only 25% of accounts “disclosed [advertisements] in a way that fully complied with FTC guidelines.”

Don’t forget that Kylie also creates free advertising for herself

The torrent of ads for Kylie Cosmetics that Kylie posts on Instagram are even more valuable than the money she gets paid by other brands. Consider that every single time Kylie shares one of her own ads, she’s simultaneously saving a million dollars or more in traditional advertising costs *and* generating millions of dollars in revenue for the cosmetics and fashion lines that bear her name. In this respect, she’s the exact inverse of Maeby Fünke working at the banana stand:

And Kylie advertises for Kylie Cosmetics *far* more than she does for any other brand. Over the same April-June 2018 period, we counted a total of 41 separate posts advertising something for Kylie’s company, including 23 posts in April alone. Those 41 posts netted a total of 137,262,729 likes, for a per-post average of 3,347,871.

That number is a little bit lower than Kylie’s average for openly paid posts for other companies. But it still translates to $2,778,732.92 in advertising whenever Kylie has a product or pop-up shop or sale to announce. And last fall, Kris Jenner announced that Kylie Cosmetics had done $420 million in sales in the first 18 months of its existence. Every time Kylie shares a new post, she saves herself money that would in years past have gone into print and television ads, generates sales for the cost of a photo or video shoot, and strengthens her own brand a little bit more.

Which brings us to the one thing that sets Kylie apart from almost every other influencer on social media today: She owns her own company. She’s paying herself for her own ads. That may sound obvious, but remember how important authenticity is to both advertisers and advertisees. If the merest #ad or #sponsored hashtag is enough to set off a twinge of doubt in the viewer, if the goal is to make the sponsored content appear as genuine as possible, what solution could be better than ensuring your every photo and caption is a literal advertisement for yourself?