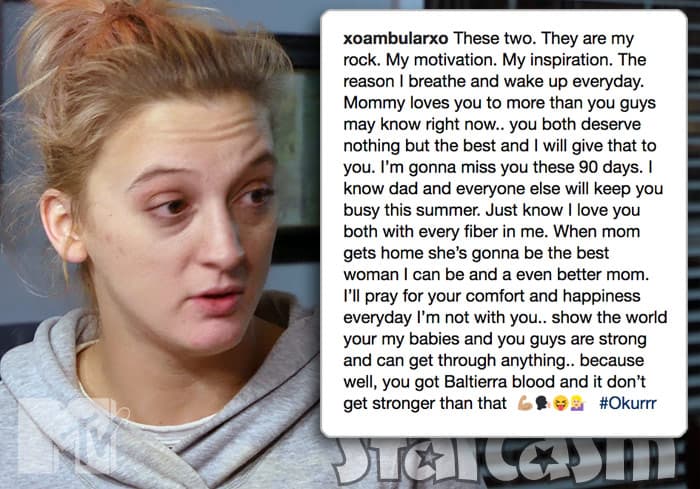 Teen Mom OG dad Tyler Baltierra’s dad Butch Baltierra and wife Catelynn Baltierra have both had multiple stints in rehab, and now Tyler’s sister will be following in their footsteps. Just days after a very public falling out with her husband Billy Elkins, Amber announced that she will be checking herself into a rehabilitation facility for 90 days.

Amber made the announcement on Facebook and later shared an update Instagram. “Well it’s official. Billy has moved out,” Amber wrote on Facebook. “Kinda don’t know how to feel but I do know that I’ll be okay. I always end up being okay. But this time I’m gonna be so much better.”

She then addressed the fact that her and Billy’s separation played out on social media with lots of bitter name calling and accusations towards one another. “My depression has taken over my life and I’m acting like a child fighting on social media with people who just don’t know the real story,” Amber continued, before revealing that she is heading to the Lone Star State just like her dad. “I’m going to Texas this Friday for 90 days to clear my head and finally get me back. I have never been this bad in my life and I’m loosing myself and I just can’t do it anymore. I can’t keep fighting myself. I’m tired and I can’t do it alone. I need help. Nothing wrong with admitting you need help and taking the [action] to do so.”

A commenter sympathized: “Girl depression sucks. I’m going though it too.. Even went as far as trying to kill my self.. Head up girl praying for you.” Amber seemingly revealed that she, too, is having suicidal thoughts. “Yeah I’m at that point,” she responded. “Thank you so much.”

Amber later posted photos of her son and daughter on Instagram and promised in the caption that she is “gonna be the best woman I can be and a even better mom.” Here is Amber’s full caption:

These two. They are my rock. My motivation. My inspiration. The reason I breathe and wake up everyday. Mommy loves you to more than you guys may know right now.. you both deserve nothing but the best and I will give that to you. I’m gonna miss you these 90 days. I know dad and everyone else will keep you busy this summer. Just know I love you both with every fiber in me. When mom gets home she’s gonna be the best woman I can be and a even better mom. I’ll pray for your comfort and happiness everyday I’m not with you.. show the world your my babies and you guys are strong and can get through anything.. because well, you got Baltierra blood and it don’t get stronger than that ??????‍♀️ #Okurrr

Teen Mom OG viewers may recall some concerning scenes with Amber in which Butch and Tyler implied she was using drugs:

BUTCH: The main thing is your sister has got me kind of worried.

TYLER: Worried about what?

BUTCH: About her. About her being her. She lives with me and I see a whole lot that nobody else sees.

In a later scene when Tyler arrives to pick Butch up to take him to rehab, we find out that the power is out in the house because of an unpaid electric bill. In addition, Amber’s appearance and mannerisms did little to assuage concerns that she may be using:

After those scenes aired, Amber posted an Instagram video in her defense, but she only addressed the accusations of meth use specifically. “So, for everybody that thinks I’m on crystal meth [laughing], I feel so bad for you. I really do,” she said. “I really feel bad for you that you’re that, um, naive to the fact of MTV and their editing.”

So, there is the potential that the next season of Teen Mom OG will include scenes with Tyler while his dad, his wife, and his sister are all in rehab at the same time. I believe it is very likely that Tyler himself will need time away at some point to help find SOME SORT of stability amid the chaos. He’s been writing poetry recently as a method of therapy, and these poems really highlight some of the very serious struggles he is going through right now:

It’s relieving to have somewhere to put all these thoughts & emotions #Poetry #MyOwnTherapy pic.twitter.com/q9AC1ebokq

Getting back to Amber though — of course we wish her the best and hope that her 90 days helps her reach her goal of being the best woman she can.

Did Amber Portwood and boyfriend Matt Baier break up?