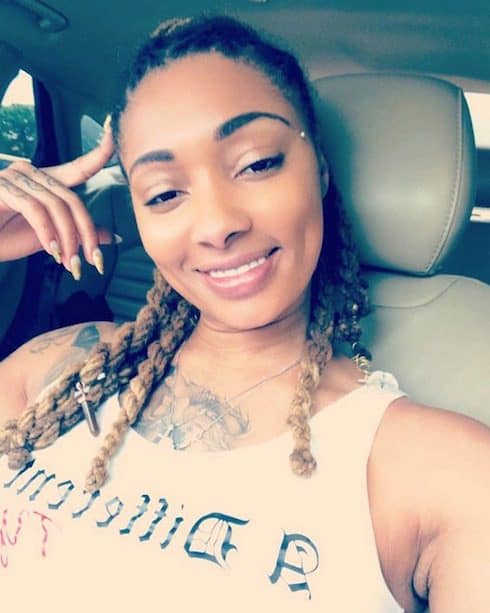 A number of unconfirmed reports suggest that Dutchess from Black Ink Crew — whose real name is Cristana Lattimore — was allegedly responsible for a major multi-car accident that left one man dead and another with serious injuries.

The accident in question happened at around 1:30 this past Monday morning. According to Charlotte news station WCNC, “at least five vehicles, including a motorcycle and a tractor-trailer, were involved in the crash.” Their report says that “a woman driving a 2015 Mercedes” on Interstate 85 hit a disabled truck, which sent debris flying across the highway.

The motorcyclist then hit the debris, lost control of his vehicle, and was thrown.

The driver of the car behind the motorcyclist stopped and began pulling the man out of harm’s way. But when a tractor-trailer “attempted to avoid hitting [that] man’s vehicle by swerving to the right,” he hit and killed the motorcyclist.

Only the motorcyclist has so far been identified. (One other driver was taken to Carolinas Medical Center with what WCNC called “serious injuries.”) Dutchess from Black Ink only became linked to the man’s death after a flood of comments on her Instagram page suggested she was the woman responsible for hitting the disabled truck and scattering the debris that began the chain of events.

Dutchess has yet to respond to the allegations, though she has turned off comments on Instagram as of her most recent post. Additionally, we checked with the Mecklenburg County Sheriff’s Office, and found no arrest records for anyone named Cristana Lattimore from the last three years. So, if Dutchess was responsible for the accident, she wasn’t charged with anything at the scene.

We also tried to find out whether Dutchess drives a 2015 Mercedes (which, it should be noted, would not be conclusive evidence). The only photo of Dutchess behind the wheel of a car that we could find comes from an Instagram post dated December 18, 2014, which was after Mercedes’ 2015 cars would have shipped. But the photo only shows part of the car:

By @divinesilence via @RepostWhiz app: DUTCHESS X SILENTॐ I remember running along side this Beauty for 3 str8 blocks…Haven't seen a woman walk in heels like that in a minute. Straight concrete rose ?@dutchessofink ? // Thx Bellè ? DutchessLattimore.com #VH1 #BlackInkCrew #BlackInk #DutchessOfInk The night we got jumped lol as we drove away #tbt

However, it does look like the concave door features in the above photo match those of almost every car sold by Mercedes in 2015.

Again, though — none of this is conclusive. We can’t say for sure what type of car Dutchess from Black Ink drives; we also know she wasn’t arrested at the scene of Monday’s crash, something that would be highly unusual with such a big accident. (WCNC’s report doesn’t state whether the driver of the Mercedes stopped after hitting the truck or continued to drive down the Interstate.)

MY 600 LB LIFE What was Coliesa McMillian’s cause of death?