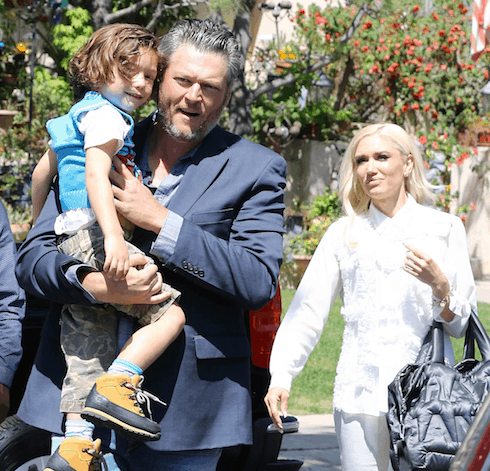 Pregnancy rumors involving Gwen Stefani and Blake Shelton are nothing new, but the latest gossip suggests what may be a new development in the pair’s relationship. Talk of Gwen Stefani using a surrogate to have a baby, Kim Kardashian-style, has apparently heated up in the wake of Mother’s Day.

Devotées of Gwen and Blake’s story will recall that they’ve been subject to fresh pregnancy and / or marriage gossip on an almost weekly basis since going public in November of 2015. Just last week, the two were said to be “finally ready” to get married; a couple of months before that, the dominant talk was of Gwen getting pregnant with a “miracle baby.”

(For good measure, there were also rumors that he was planning a surprise proposal during her Christmas special; that Gwen was flaunting her baby bump outside the grocery store; and that Gwen was knee-deep in IVF treatments so she could surprise Blake with fertility news.)

The gossip du jour on Gwen Stefani using a surrogate comes via Hollywood Life, who used the tried-and-true Mother’s Day trampoline to jump into a story about Gwen and Blake using “surrogacy or adoption” to fulfill their dream of adding to their family. According to their latest take, the two of them are “both thinking of having children together,” and have been considering the best way to make that happen.

“Mother’s Day…is a sad reminder to [Blake] that he never had kids of his own,” said HL’s source, who explained that “there’s still a big piece missing in his life.” To that end, “Blake hasn’t given up hope yet on his own children. He and Gwen have begun to discuss alternative ways they could have children together.”

It also seems that either surrogacy or adoption is a path the two stars are willing to go down: “Everything is [a] viable option at this point,” the insider added. “Gwen feels Blake is amazing to her boys and will make an amazing father to their own kids one day too.”

While this story hasn’t yet been refuted by anyone close to the couple, it’s probably worth pointing out that Gossip Cop already busted the site for a pre-Mother’s Day story on Gwen and Blake that turned out to be less than accurate. Days ago, the story was that Blake had a big Mother’s Day surprise planned for Gwen, involving a trip and a great deal of secrecy.

What the couple actually wound up doing was going to church together and then spending the rest of the day on the DL. Which is also when they had the alleged conversation about Gwen using a surrogate…so this could either be a case of the couple stepping out of the spotlight for a big decision (and then leaking it) or a tabloid keeping nimble with its gossip, depending on what you want to believe.