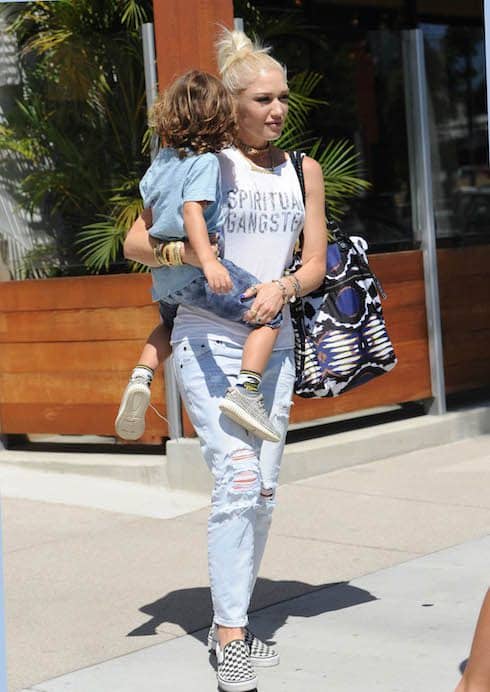 Now that Kylie Jenner’s given birth, it seems the next round of intense celebrity pregnancy gossip might focus on Gwen Stefani and Blake Shelton. The couple, who’ve been linked to pregnancy rumors somewhat regularly since they started dating, are once more said to be with child — and the secret wedding talk is making a comeback, too!

Devotées will recall that a quickly debunked report had Gwen Stefani and Blake Shelton expecting back in early September of last year. Then, after that story faded from memory, a separate round of gossip had it on good (anonymous) authority that the two were “getting ready for a baby” in early November. Neither Gwen, 48, nor Blake, 41, commented on the reports.

With that in mind, then, the latest comes from an OK! article (via Celebrity Insider) that “months of IVF treatments” paid off for Gwen, who is “a few months along” in her “miracle baby” pregnancy.

Added their insider, “Everyone who knows is absolutely delighted for them.”

If you’re a bit skeptical, here’s footage of Gwen Stefani and Blake Shelton deliberately skidding on ice this past January to help raise your other eyebrow:

The report further claims that Gwen and Blake were married in secret over the holidays. But, honestly, I was a bit disappointed when reports that they were going to get engaged during Gwen’s Christmas special didn’t pan out. The Christmas special, like the late-night monologue, is a stale idea from another time; trying something relatively unexpected, like an on-camera proposal, seems like a good idea.

In any case, the always-busy folks over at Gossip Cop have stuck their pin in both balloons, calling the stories “fake news” and excoriating both publications for running them. According to their take, there is “no record in California of Shelton and Stefani having tied the knot around Christmas” (nor of any secret Mexican wedding in the weeks after that).

And their anonymous insider — said to be close to Gwen — laughed off the pregnancy talk and straight-up called it “false.”

Still: Janet Jackson got pregnant at 50. And rumors that then-60-year-old Kris Jenner was pregnant stirred up a lot of talk a couple of years ago. So Gossip about Gwen’s uterus seems unlikely to die down anytime soon — especially when you remember she’s got the sexiest man alive on her arm.