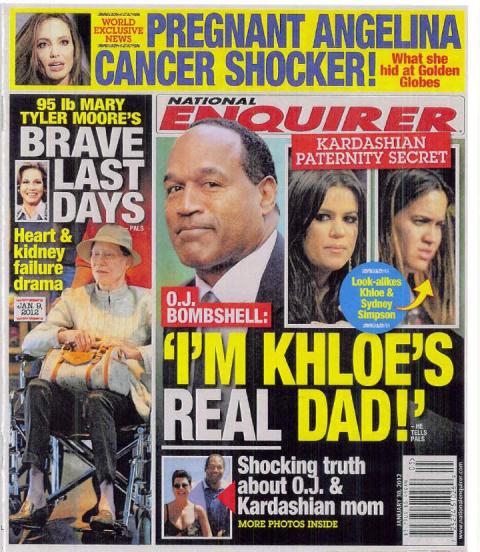 Just when I started to think of the National Enquirer as almost respectable (They were right about John Edwards, AND they called Paula Deen’s diabetes last spring,) they go all Weekly World News with a front page that declares, “O.J. BOMBSHELL: ‘I’M KHLOE’S REAL DAD!’” (And that’s followed by “Shocking truth about O.J. & Kardashian mom.”)

Khloe’s paternity was called into question last week after her “real” father Robert Kardashian’s ex-wife Jan Ashley said Robert told her Khloe wasn’t a Kardashian. Soon after that the Khloe Kardashian Birthers Movement was unofficially formed with members throwing out all sorts of theories – including that Khloe’s father could be none other than O.J. Simpson.

Most of the O.J. Simpson theories were born out of the common knowledge that he was a close, personal friend to the Kardashian family at the time Khloe was conceived. Also, some have said Khloe looks similar to O.J. Simpson’s daughter Sydney Simpson. Here’s a side-by-side of the two. (My apologies for the poor quality photo of Sydney, but there aren’t many pictures of her out there.) 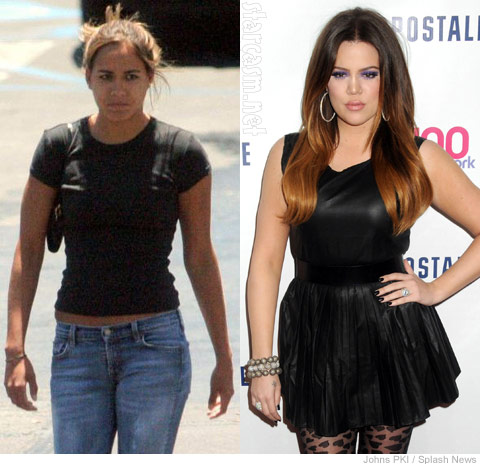 I haven’t been able to get an actual copy of this week’s National Enquirer yet, so I’m not sure what they’re basing their story on (Possibly just photos and an anonymous “inside source”). Of course, the world would certainly be turned on its ear if this proved to be true! WOWZA! (Where’s Maury Povich when you need him?)

UPDATE – Here’s the scoop from the article. According to The National Enquirer O.J. Simpson told a number of friends that he was Khloe Kardashian’s dad. The magazine has more than one source that claim Kris Jenner had an affair with O.J. Simpson right around the time that Khloe was conceived.

“O.J. bragged about his sex life and many female conquests, which he said included some of his best friends’ wives,” yet another source told The National Enquirer. “He used to tell us way back — even before he and Nicole got divorced — that he had a love child with the wife of a wealthy family,” the source claims.

The Kardashians have presented a united, mocking front on Twitter with Kim sharing a photo of the cover story with the tweet “It makes sense now! Khloe, u are so tan!” Kris Jenner followed with “”Thanks for all your love and support today dolls!” and “Wow some of the stories out there today are either fabricated, or SO 24 years ago!!” Khloe also chimed in her frustration by tweeting, “Do the rumors ever stop? What is the recent obsession with all of this? What are they going to say next? #SoapOpera.”

Is Khloe really using the term soap opera derogatorily? The whole family is a living soap opera – that’s their profession! And did you notice Kris said the stories out there are either fabricated OR so 24 years ago? Or? Hmmmmm…

Michael Scott to leave ‘The Office’ after one more year?