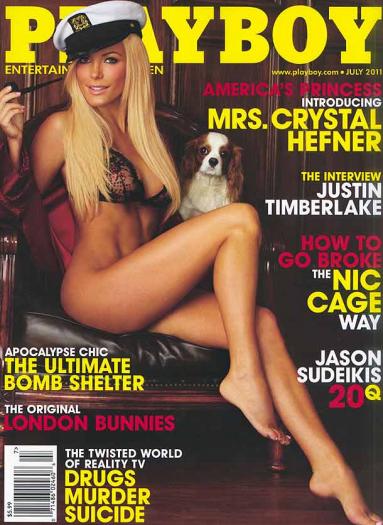 The NY Post has a source that alleging that 25-year-old aspiring singer Crystal Harris (who appears in a now-ironic Playboy cover this month) was trying to negotiate a $500,000 deal to dump 84-year-old Hugh Hefner on their their televised wedding day. (They had a deal with Lifetime to broadcast the the ceremony.)

“Crystal wanted to ditch Hef at the altar. Her plan was to walk up the aisle and say she couldn’t go through with it. The wedding was to be filmed for a reality special, and her refusal to marry him would be a sensation. She was looking for a tie-in deal of around $500,000 for the exclusive ‘I ditched Hef at the altar’ interview. While there was interest, Crystal didn’t get an offer anywhere near half a million.”

Crystal’s rep Michael Blakely said this plot was “not true, to my knowledge.” He also denied reports that Crystal was having an affair with Dr. Phil’s son.

Even if Crystal wasn’t trying to use Hugh for a big payday and reality television moment, Hugh acknowledged on his Twitter that something is suspicious about Crystal’s timing. He retweeted someone pointing out the coincidence of Crystal dumping Hugh on the same day her itunes single “Club Queen” came out. Looks like Hugh’s ex #1 girl Holly Madison was right to suspect Crystal of not being on-the-level.

Even though Hugh’s most famous three girlfriends weren’t necessarily his soul-mates, they continue to show affection and loyalty to the aging playboy. Bridget Marquardt stopped by to see him, and Kendra Wilkinson tweeted about bringing the “jack and coke” to Hugh’s scheduled screening of Runaway Bride on what was supposed to be his wedding day. Holly Madison responded to Kendra’s tweet with  “U r too sweet. Wish I was there to support, too!”

Hefner’s ex-wife Kim Conrad also stopped by with her mother to offer Hugh support. There are many types of love in this world, and it looks like Hugh does still have a harem of beautiful women who genuinely care about him.

Crystal explained her reasons for breaking up with Hugh on Ryan Seacrest’s radio show this morning: “I just sat back and thought about it all,” she continued. “Is this what I wanted? And it wasn’t.”