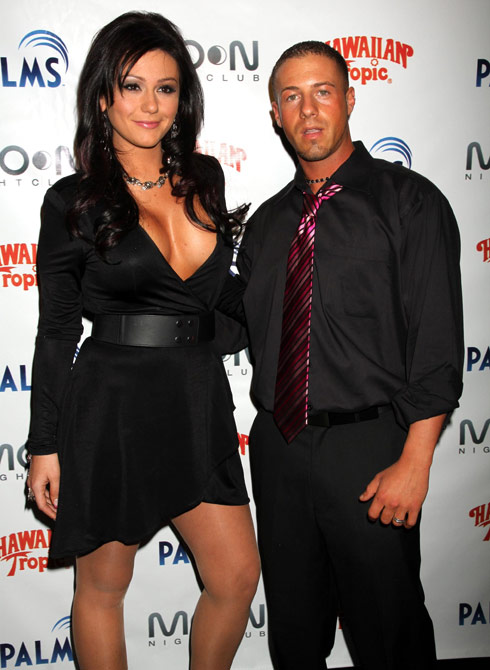 Jersey Shore’s Jenni “JWoww” Farley has an ex who simply will not go away.  His name is Thomas Lippolis and dude has been making a grab at the reality star’s fame and bank for what seems like forever.

Back in December I ran a piece about Lippolis filing a lawsuit against JWoww claiming all sorts of “you owe me” reasons that he deserved to get paid.  These mainly consisted of pouting Thomas arguing he was the business manager and lined up many of her money making appearances.  JWoww stated that whatever minimal amount of things Lippolis handled on the business end during their time together he was properly reimbursed for.

Now Radar has a video interview via Star in which Lippolis rambles on about how unfair he was treated and such.  As a desperate person would, he took it to the next level by claiming that he was stabbed by JWoww and went on to claim that she insinuated that she attempted suicide by taking pills too.

Here are some of the low-lights from the clip:

“Before you knew it we were yelling at each other and I looked down at my arm and my entire arm was cut open and she literally stabbed me with a knife . . . My wounds resembled something out of those surgery TV shows — the muscle was completely cut and it was just hanging out of my skin.”

“Once she got famous it just got to her head and she just became this complete horror.”

“I never pressed charges against Jenni because I think love does funny things to somebody.”

“She wound up grabbing a fireplace poker and wanted to continue.  I couldn’t believe it.  She wound up swinging that at me a few times.”

“She went into the bathroom came out and threw a remote at me.  I really don’t even understand why.  I had left then she called me on the phone because she said that she swallowed a bottle of pills and you know obviously insinuating that she tried to kill herself because of how she was portrayed on TV.”

He goes on to claim that he has pictures of a separate attack and had the gazungas to state that he didn’t want to make JWoww look bad when explaining why he never filed charges.  Bleh.

Farrah Fawcett speaks with Tori Spelling from beyond the grave