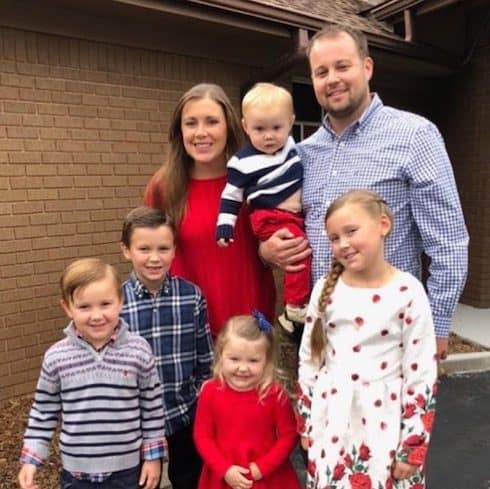 It’s been a hot minute since we’ve heard much from Anna Duggar, who last made headlines for herself when she called her ten-year marriage to Josh a “wonderful adventure.” Though Anna’s tone-deaf (or low-key shade) anniversary statement riled some observers, things do seem to be going quite well for the controversial couple. A recent social media update certainly got the the family’s observers’ attention — did Anna Duggar have another baby in secret?

The pic that got the gossip started actually came from Jessa Seewald. It’s the second in a long string of photos she shared from the Duggar clan’s ugly Christmas sweater party. According to the talk from people who claim to see this, Anna is apparently breastfeeding under a cover:

Part 2 of the ugly sweater party! . We ate way too much Italian dinner, then dove into desserts that were part of a baking competition. Next was a white elephant gift exchange, and then board games and a movie to bring the evening to an end.

I don’t know about this one. I’m all for ridiculous gossip, but based on the tiny sliver of Anna that is visible, it looks like she’s just sitting on the couch talking to someone. She’s definitely not wearing an ugly sweater, but that’s to her credit. I’ve been looking at the photo trying to find this mysterious newborn-sized bump for way too long now, and the only thing I’ve got is a newfound sympathy for the guy in Mallrats who couldn’t see the 3D picture of a boat.

Adding fuel to this particular fire of speculation is the fact that Anna herself also shared the photo in question. But she did it the day *after* Jessa uploaded hers & kicked off the gossip. And in Anna’s version, she’s cropped herself out. It’s the final pic in Anna’s update:

Looks like a new tradition has been born at the Duggar home! We had the first annual dUGgarLY (ugly) sweater party! Lots lots laughter, enjoying the beauty of family, fun and maybe a little too much dessert! ? We closed out the evening with a time of prayer for the family and friends as they minister in Central America this Christmas season. Mackynzie and cousin Emily baked a delicious vanilla cake with 12 peanut butter “buckeye” reindeer, a gingerbread sleigh and funfetti cakeball ornaments! What are your favorite Christmas traditions? Any new traditions for you this year?!?! P.S. John David was the official “ugly sweater” winner this year ?? #littlesuggars #uglysweater #familyfun #Christmas

If Anna really is breastfeeding in the photo, it could just be her youngest child Mason. Anna gave birth to Mason in September of 2017; he was fourteen months old when these pics were taken, and could very well still be breastfeeding. However, as The Hollywood Gossip points out, based on other social media updates, it looks like Mason has been eating solid food for some time.

Of course, whether or not Anna had secret sixth baby — or is pregnant even as we speak! — it’s impossible to rule out this whole thing being a poorly executed publicity stunt. Anna’s return to Counting On has been long rumored, and Josh Duggar always seems to be a few social media updates away from a return to reality TV. And as the family well knows, there’s no better way to get people to overlook your past transgressions than having another kid.

(Photo credits: Did Anna Duggar have another baby via Instagram; h/t The Hollywood Gossip)