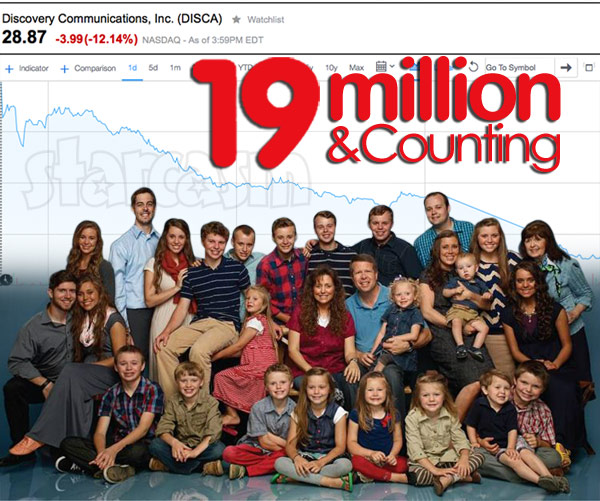 In case you were wondering just how much money TLC lost by canceling 19 Kids and Counting in the wake of the Josh Duggar molestation scandal, the network’s parent company, Discovery Communications, revealed the figure today. The loss? Somewhere in the neighborhood of $19 million.

That amount comes from Discovery Communications CFO Andrew Warren, who shared in a post-earnings conference call this morning that the company’s disappointing profits in the second quarter were due in part to “higher restructuring and other charges this year of $19 million, primarily due to content impairment charges of canceling TLC’s 19 Kids & Counting.”

As The Wrap points out, the figure for restructuring and other charges in the second quarter was actually $24 million, which was up $19 million from the same quarter in 2014.

But it seems all the blame for Discovery Communications’ lackluster second quarter can’t all be put on the many, many shoulders of the Duggar family; the global mass media and entertainment company’s profits dropped way more than $19 million from the previous year. According to Tuesday’s earnings report, Discovery Communications’ net income fell nearly 25 percent, from $379 million to $286 million, year to year.

The Quarter 2 earnings report had a huge effect on the company’s stock (DISCA), which plummeted more than 12 percent on Wednesday–from $32.86 to $28.87 per share.

Regardless of all the gloomy numbers, Discover Communications President and CEO David Zaslav remained positive. “Driven by our unmatched portfolio and steady growth around the world, Discovery’s strong start to the year continued in the second quarter,” he said.

We have carried that momentum into the third quarter and signed three landmark deals — the historic agreement for the Olympic Games in Europe, our agreement to acquire full ownership of Eurosport and our comprehensive long-term renewal with Comcast — that will bolster Discovery’s position and market share for years to come. I am pleased with the progress we made in the first half of the year and look forward to building our stable of content, IP and world-class platforms to drive viewer engagement and meaningful value to distributors, advertisers and shareholders now and into the future.