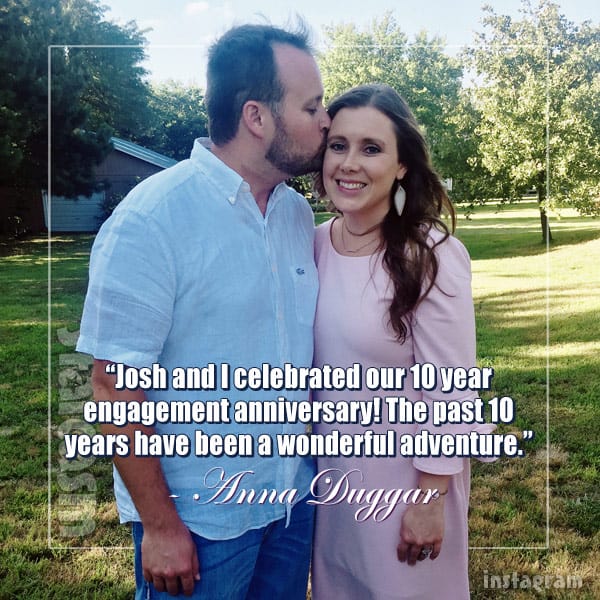 It has been a rough few years for former TLC reality star Josh Duggar, but his wife Anna Duggar seems to be putting a positive spin on his child molestation scandal involving his sisters, Josh’s Ashley Madison account and sex addiction admission, his time in rehab, Josh losing his job with the Family Research Council (as well as TLC), and the numerous lawsuits as she sums up their decade together as a “wonderful adventure.”

The fond reminiscence was part of an Instagram post celebrating the month of June. “June was an exciting month for our family: Marcus, Michael and I are are officially a year older + Josh and I celebrated our 10 year engagement anniversary!” Anna captioned a gallery of photos, including the picture of her with Josh above. “The past 10 years have been a wonderful adventure,” she continues. “So thankful for God’s redeeming grace and His blessings to us along the way, especially our 5 M’s!”

June was an exciting month for our family: Marcus, Michael and I are are officially a year older + Josh and I celebrated our 10 year engagement anniversary! The past 10 years have been a wonderful adventure. So thankful for God’s redeeming grace and His blessings to us along the way, especially our 5 M’s!

The Instagram post is the second social media post by Josh and Anna in the past week, as they also shared a video message via the Duggar Family YouTube channel congratulating Josh’s brother Josiah on his marriage to Lauren Swanson on June 30. Here’s that video:

JOSH: Congratulations Lauren and Josiah! We’re so excited for you guys on your special day.

ANNA: Lauren, you are a beautiful bride, and we are so thrilled to have another sister-in-law. And you guys are just such a cute couple together. And we look forward to having you join the married crew.

JOSH: Our five little Ms also send their congratulations, and we’re just thrilled for you guys. Look forward to spend a lot more time with you guys. Glad you’re going to be close by. We love you guys. God bless you.

That’s some sage advice from Anna, especially given her own experience.

If you were curious about the anniversary timing, Josh Duggar and Anna Keller met while they were both attending a Christian homeschooling convention in 2006. Josh and Anna were both either 17 or 18 at the time. (Josh was born in March and Anna in June of 1988, so their age depends on the dates of the convention.)

The two became engaged in June of 2008 and would eventually marry in Anna’s hometown of Gainesville, Florida on September 26, 2008.