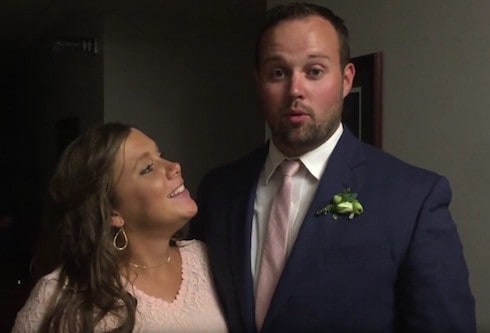 Josh Duggar’s return to reality TV has been rumored for months now, but a pair of new reports suggest that the formerly unthinkable might be just days away from happening. According to an Inquisitr take, several Duggar family social media accounts have teased an appearance by Josh in the September 25th Counting On episode, and “some TLC official pages are promoting the episode with promises of secrets and surprises.”

Fans (and detractors) have further pointed out that Josh was wearing the colors of the wedding party when he appeared alongside wife Anna Duggar in a recent video clip congratulating newlyweds Joseph Duggar and Kendra Caldwell. (This was the clip wherein Josh, to the sound of many a facepalm, said it was “nice to have another sister” in the family.) Given Josh’s apparent prominence as a member of the wedding party, it would be difficult–though not impossible–to cut him out of the entire episode.

Furthermore, a recent In Touch article alleged that family patriarch Jim Bob had requested TLC’s permission to get Josh back on the air with the new season of Counting On. The source for the article claimed that the family patriarch “spent a month trying to convince TLC that Josh should be back on the show,” and that the network “agreed to let him film an upcoming Counting On webisode where he’ll talk about his joy at learning he’s going to be a father again.”

While evidence of that webisode has yet to surface, it’s worth pointing out that we reported similar rumors of TLC granting Josh a “conditional” return back in May. And Josh did indeed appear in a surprise family YouTube clip over the summer, to general chagrin but no real outrage. So it’s possible that the “webisode” was just code for any sort of test balloon via the Duggars’ official social media channels.

Having said all that, Josh has hardly done much to try and redeem himself over the past two years. Short of potential Counting On appearances, the most prominent stories involving the name Josh Duggar have all been extensions of the terrible things people hate about him: a rumored return to sex rehab, a marriage allegedly in shambles, an ill-fated attempt at joining his sisters’ lawsuit regarding the release of police documents detailing the fact that he molested them. It’s hard to see how TLC benefits from putting an unrepentant Josh back on the air.

(Photo credits: Will Josh Duggar be on Counting On this season via Facebook)