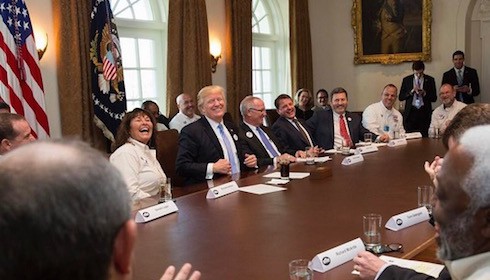 Donald Trump as famous for his Twitter trigger finger as he is for never admitting when he’s at fault. (Or, more specifically, never admitting that he could be at fault.) But that combination of characteristics means we never see stories featuring Trump taking the celebrity walk of shame: deleting a controversial tweet shortly after firing it off. Nor do we get to watch as Trump attempts to clarify the thing that made the first tweet controversial and bring himself further shame in the process.

So, does Donald Trump delete tweets? Has he ever done it since announcing his presidential campaign? The short answer is yes–but the longer answer is that he’s not really done it for the reasons that most celebrities do. According to the good people at ProPublica, who have been keeping a detailed archive of Donald Trump’s deleted tweets since the day he descended the escalator, Trump has deleted 161 tweets since becoming a presidential candidate.

Most of Trump’s deleted tweets, though, were sent off for minor spelling or grammatical errors, and not because of any untoward pot-stirring. Here’s the first of the 161, in which Trump claims Ted Cruz “illegally stole” his Iowa caucus victory. The reason it was deleted? Trump wrote “any” instead of “and”:

The same message, its typo corrected and the word “illegally” removed (presumably because “illegally stole” is redundant?) went up six minutes later:

Ted Cruz didn't win Iowa, he stole it. That is why all of the polls were so wrong and why he got far more votes than anticipated. Bad!

Likewise, when Trump threw shade at Mark Cuban, Gennifer Flowers, and the Clintons all at the same time with this tweet, he deleted it only in order to get the correct spelling of “Gennifer” the second time around:

If dopey Mark Cuban of failed Benefactor fame wants to sit in the front row, perhaps I will put Gennifer Flowers right alongside of him!

But that’s about as much as Donald Trump is willing to take back. We could only find one instance of Trump deleting a tweet because of public outcry, which came in July of 2015, after Trump retweeted a follower who said that Jeb Bush “has to like the Mexican illegals because of his wife.”

However, Trump’s reluctance to delete tweets may actually help him in that it could cause fewer headaches under existing preservation guidelines. According to Shontavia Johnson, a professor of intellectual property law at Drake University, Trump’s tweets are “official presidential records under the law”; as such, “deletions are probably not allowed under current law.” However, Johnson acknowledges that “there may not be much anyone can do to stop Trump from taking down tweets.”