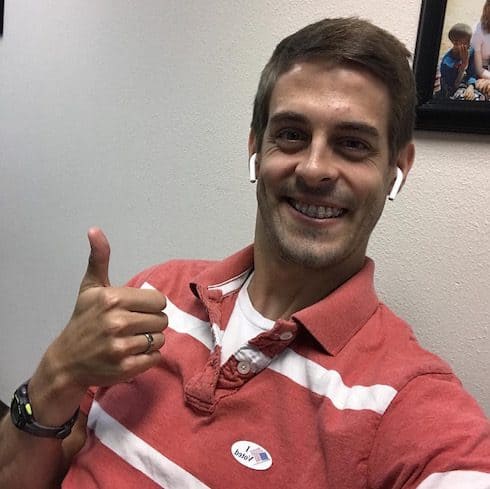 The long-standing feud between Derick Dillard and Jazz Jennings reached a new low this week. One reason is that the “feud” is now completely one-sided, with Derick — who is still fired from Counting On — lashing out at Jazz seemingly at random (or whenever his mentions drop below an arbitrary level).

Another reason? Derick’s latest outburst came while Jazz was still in the hospital, recovering from successful bottom surgery. Jazz, who scheduled her surgery earlier this year, underwent the procedure on Tuesday, and shared her first post-surgery social media update two days later:

i’m doing great, thanks for all of the love and support?

So, congratulations, right? Good vibes all around! Except when People tweeted out their article on Jazz’s update, Derick struck. He once again alluded to transgendered people as victims of “child abuse” with a retweet that, as of this writing, has yet to be taken down: 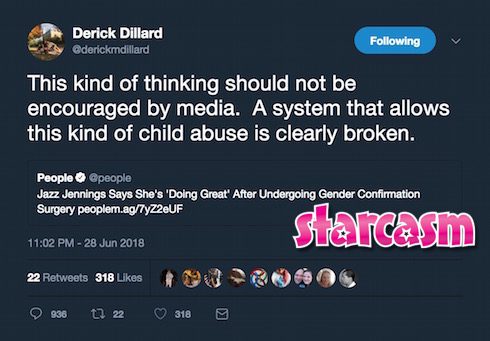 Devotées of the Derick Dillard and Jazz Jennings story (it doesn’t feel quite right to call this a “feud,” since it’s so reminiscent of a middle schooler trash-talking some high school kids from the side of the court in the hopes that they’ll dare him to join their basketball game) will recall that Derick has used this type of language before.

Earlier this year, he attacked Nate Berkus and Jeremiah Brent of TLC’s Nate and Jeremiah By Design in a tweet that called gay people “degrading to children.” Derick was roundly condemned for his comments, most notably during a segment of The View when even Meghan McCain lined up against him.

We’re coming up on the one-year anniversary of Derick’s original inflammatory, “Transgender is a myth” remarks. And Jazz has yet to offer fans an in-depth post-surgery update the way she did before undergoing the procedure. So we’ll probably hear more on the topic from Derick, whether he has any new insults to share or not. But it does seem like his invitation for Jazz to come have coffee with him is maybe withdrawn.