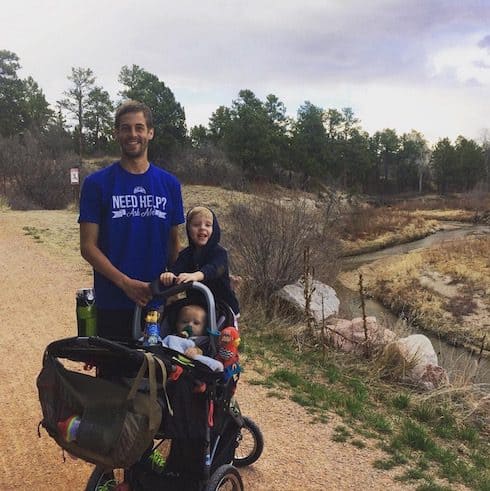 After several relatively quiet months following his firing from TLC’s Counting On, Derick Dillard’s homophobia has raised its ugly head again. This time, the subjects of Derick’s attention are Nate Berkus and Jeremiah Brent, the stars of TLC hit Nate and Jeremiah By Design — along with the network itself, which Derick claims is just one more piece of the vast “liberal agenda.”

We want to let our viewers know that Derick Dillard has not participated in Counting On for months and the network has no plans to feature him in the future. We want to reiterate that Derick’s personal statements do not reflect the views of the network. TLC is proud to share the story of Jazz Jennings and her family and will continue to do so.

After the announcement, Derick went silent on social media for a few days, and was relatively chipper when he did return. However, before long, Derick was comparing the upbringing of transgendered children to child abuse and inviting Jazz Jennings to Arkansas for coffee and a chat.

Which brings us to today, and Derick Dillard’s homophobia resurfacing in conjunction with an attack on the network responsible for keeping his family on the air. Over the weekend, Derick retweeted a TLC plug for Nate and Jeremiah By Design, the network’s home improvement show starring gay couple Nate Berkus and Jeremiah Brent.

Derick took particular issue with the original tweet’s inclusion of an image featuring Nate, Jeremiah, and one of their two children, calling the depiction of a gay couple having a child on TV a “travesty”: 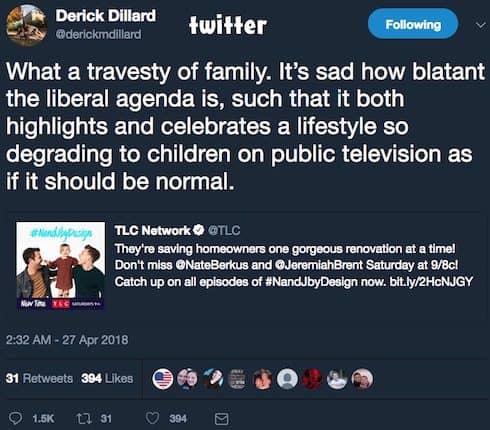 This set off a furor among Derick’s followers, some of whom were quick to point out that TLC also brought fame and fortune to the Duggars and wound up sticking by them through the family’s child abuse scandal. To which Derick responded with an attempt at the high road — for the Dillard family, and not the Duggars:

Derick also claimed that he, Jill, and their children voluntarily left Counting On on May 31st of last year — and that the network didn’t want them to go:

When one follower asked Derick if he could “back this up with documentation” such as “letters [or] emails,” Derick gave a one-word reply: 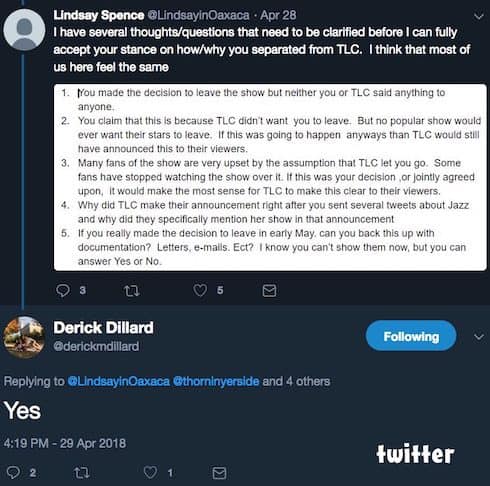 Finally, when asked why the same God who “created everything perfect” would have thrown a wrench into his own divine plan by creating homosexuality, Derick employed the Josh Duggar defense and blamed that one on the devil: 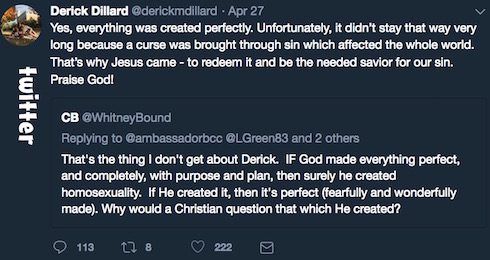 Neither Nate nor Jeremiah have responded to Derick’s tweets directly. However, not long after Derick wrote the first of them, Nate shared a pic of he and Jeremiah’s family with a caption that seemed completely appropriate:

My hope with having a show like #NandJByDesign on @TLC, where we go into people’s homes and welcome viewers into ours, is that we can start to break down barriers & normalize the way our family looks & the way our family loves. @JeremiahBrent pic.twitter.com/NsCAeh1nxb

Nate and Jeremiah By Design airs Saturdays at 9 PM on TLC.