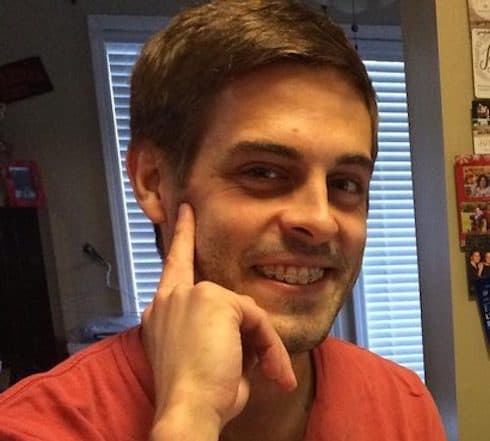 Former Counting On participant Derick Dillard is attempting to make nice after lashing out at TLC stars Nate Berkus and Jeremiah Brent with a string of widely condemned tweets. But is Derick Dillard homophobic? Derick claimed he “loves all people” after getting trashed on national television by the hosts of The View — though his followers aren’t taking Derick’s words at face value.

Last week, Derick found himself at the center of another controversy when he retweeted a TLC advertisement for Nate and Jeremiah By Design, the network’s popular design show starring the titular gay couple, and called it “a travesty of family.” (Nate and Jeremiah have two children together, one of whom featured in the ad.)

Derick further claimed that Nate and Jeremiah’s show is part of a “liberal agenda” and “celebrates a lifestyle so degrading to children.” (You can see Derick’s full comments, plus his back-and-forth with several confused and outraged commenters, in our article here.)

Derick’s words continued to attract attention until finally making it to national television when the hosts of The View devoted a few minutes to them on Thursday’s show. And though The View‘s discussions are sometimes politically polarized — Meghan McCain in particular has been on the receiving end of her co-hosts ire several times in the last few weeks — Duggar fan site Pickles4Truth was quick to note that not one of the hosts stood up for Derick.

In fact, at various points the hosts called Derick’s words “abhorrent,” “[lacking] empathy,” and “crazy. Whoopi Goldberg got in the final word, saying “What you don’t have the right to do is impose your particular nastiness under the guise that ‘I’m looking out for children.’ You’re not! That’s not what that is.”

Shortly after The View‘s discussion aired (and an official clip went up on YouTube), Derick found himself again beseiged by comments. So he returned to Twitter to address the issue with a new message that suggests he loves all people and wants to promote what’s best for everyone:

Really?! Are my friends on The View really going to be our standard & champion for open-mindedness? Conviction doesn’t equal lack of open mindedness. We need to love all people & promote what’s best for everyone. Most Americans believe this, but are fearful of bullying like this. https://t.co/BHBVBSsT5k

Derick’s suggestion that he’s the one being bullied appears to ring hollow with most of the people who’ve commented on the above tweet. After all, it was Derick who elevated his own an anti-transgender, anti-homosexual profile last year with his out-of-the-blue attack of then-fellow TLC star Jazz Jennings.

The fallout from those comments led to TLC’s announcement that they had fired Derick from Counting On. Derick then responded by saying he had quit before he could be fired, and that he’d taken the rest of the Dillard family with him.