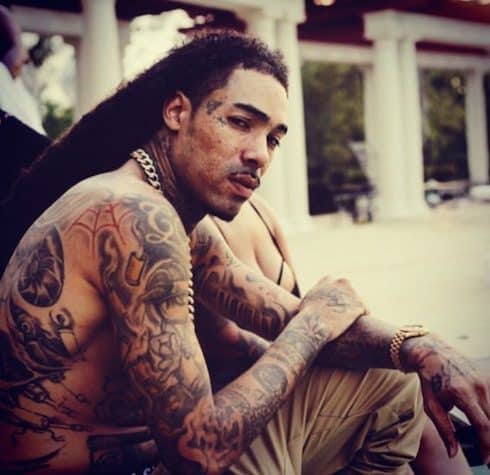 Longtime rapper and Florida resident Gunplay is prepped for bigger and better things with his debut on Love & Hip Hop Miami. Given the wide audience now set to discover him, we thought we’d help explain one of the more controversial and misunderstood questions about the man’s past: Does Gunplay have a Nazi tattoo?

The short answer? Yes, Gunplay does have a Nazi tattoo — specifically, one of a swastika, on his neck near the peak of the spine. You can see it most clearly in this image from Gunplay’s official IG feed:

The longer answer is more complicated. For one thing, Gunplay is not a Nazi. (This may seem obvious, but, given the current political climate, it never hurts to clarify.) And the reason he got the tattoo was to evoke the original meaning of the symbol, as well as its tortured and easily overlooked history.

Gunplay addressed the issue head-on in several high-profile interviews back when he first gained mainstream attention. Here’s one such instance, on-camera with iHopHop in late 2013. The outlet’s specific question and Gunplay’s detailed answer begins at the 1:35 mark (and we’ve transcribed his answer beneath the embed):

That’s the reason why I got it, because you can’t just a book by its cover. That’s the swastika symbol in itself. You look at a swastika now and you see evil, you see bad, you see death. You know what I’m sayin’? When it used to be, the original meaning of the symbol, the swastika, was love, prosperity, happiness, peace. It’s from one of the dynasties — the Ming dynasty, I think, one of those Chinese dynasties — and Hitler took it and turned it to the left and made it evil. And that’s what I feel we all are. That’s how I feel, you know, we’re brought up on this world as peaceful beings. And society and environment will tilt you to the left a little bit. It just f*cks you up. And you look at it, you look at that person as a bad guy. Like me. I’m a good guy. I just get in bad circumstances. You know. I am a swastika. You know what I’m sayin’?

In fact, the history of the swastika is even older than the Chinese history Gunplay mentions. According to the US Holocaust Museum, the earliest use of the swastika symbol appears around 5,000 years before the Third Reich, and the word itself comes from the Sanskrit word svastika, “which means ‘good fortune’ or ‘well-being.'”

Gunplay did give a different — and much more violent — answer to the same basic question a year earlier, when talking with Pigeons and Planes. When asked to explain the meaning of his tattoo and address the controversy surrounding it, Gunplay had this to say:

Yeah, it’s just my symbol of genocide to the bullsh!t. Mass murdering the bullsh!t. Too much bullsh!t out here. I came to Nazi that sh!t. I came to Hitler that motherf*cker. Put all the fake motherf*ckers in the gas chamber and gas your f*ck ass. That’s what I’m here to do. So n!ggas better walk light around a n!gga. I’ma show n!ggas. I can talk but I’ma show n!ggas. All that fake sh!t, I’ma call that sh!t out and I’ma stomp that sh!t out. I got a mission. Just playing the game for the meantime.

It’s not the best look of all time to say you’re a Nazi for bullsh!t, but, given the first answer above, it sounds like Gunplay’s own views on the issue had evolved somewhat between answers.

Finally, in a 2013 interview with Complex, Gunplay talked briefly about what it was like to get a swastika tattoo in the first place. When asked if the artist “[thought] he was crazy,” Gunplay said “Nah, they do whatever tattoo I want to get. He’s like, ‘You’re crazy,’ but whatever. [My family] thought I was crazy. I don’t think I’m crazy.”

Love & Hip Hop Miami airs Monday nights at 9 on VH1. No word yet on whether Gunplay’s swastika tattoo will be a featured topic during the initial episodes.

(Photo credits: Does Gunplay have a Nazi tattoo via Instagram)

Iggy Azalea’s DIY career: From cleaning toilets in Australia, to being a teen runaway in Miami