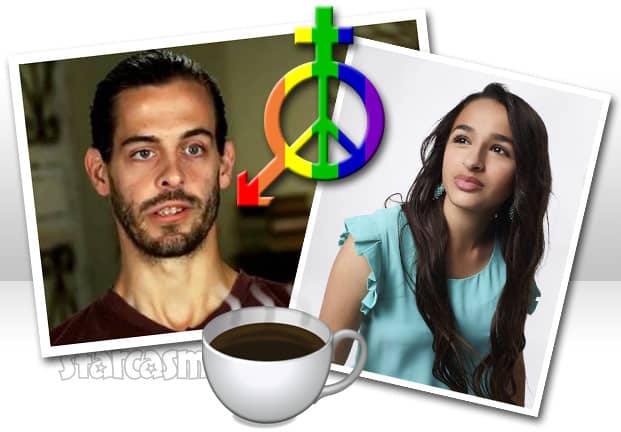 It’s been four months since TLC officially announced that they parted ways with 19 Kids & Counting and Counting On star Derick Dillard. The announcement after months of criticism over Derick’s transphobic tweets, beginning with his belief that “transgender is a myth” in a response to TLC promoting their reality series I Am Jazz starring transgender teen Jazz Jennings.

Derick has been unrelenting since his original response back in August; he’s often stated that gender is “ordained by God” and that thinking otherwise is “delusion.” Derick often debate the topic on social media — if only to convert others to the truth based on his interpretation of the Christian Bible.

Now, Derick says he’s willing to have that debate with Jazz herself, over coffee, if she’s willing to make the trip from Florida to Derick’s home in Northwest Arkansas.

The invitation came on Twitter after Jazz shared a video of 18-year-old Emma González — one of the survivors of the recent school shooting in Parkland, Florida — at an anti-gun rally. Here’s that video:

The young people will set us free. https://t.co/yftQ2OeZfO

Jazz, whose South Florida is not far from Stoneman Douglas High School, retweeted the clip, adding: “This is so powerful. I’m so proud of my community. @Emma4Change #MSDStrong”

As of this writing, Derick doesn’t follow Jazz on Twitter. But he must keep a pretty close eye on her, because he responded to her tweet, offering sympathy and his invitation for coffee:

Thinking about and praying for all those across the country, and especially in your community, who this horrific tragedy has affected. Let me know if you’re ever in Northwest Arkansas and I’d love to grab coffee and visit. #MSDStrong #neveragain

This isn’t the first time Derrick has extended an invitation to those in the LGBTQ community. His previous invite was a bit more intimidating, though, because it was an invitation to attend his church. “I want to personally invite any LGBTQ person & anyone else who would like to come with my family and me to church next Sunday,” he tweeted on February 18. “See you there! :)”

That invitation sparked a dialogue between Derick and a few observers in which Derick made it a point to use a masculine pronoun for Jazz instead of either a feminine pronoun or the name Jazz:

TWEETER: I love your family and your principles and was so saddened to see the way you treated Jazz. I truly believe she was born that way. It’s not our job to change people, convert people or judge people. We are to show love and compassion first you can’t reach people with hate.

DERICK: Hi, please realize that I never said anything against him. If you read that in a tabloid, I encourage you to be extremely skeptical of anything put out by any opinion or gossip publication. Thanks and God bless you today!

TWEETER: God bless you and your family. I know that often times you are attacked in the media for your beliefs and I don’t feel like you should ever have to compromise your beliefs for someone else. I did hear about what you said in the media but I also saw what you wrote on twitter. I just feel like you can have beliefs but also be respectful of others. For instance it offends Jazz to call her “him” But you still do it. There are thousands of Jazzes that want to come to Jesus but don’t feel accepted for who they believe they are. Praying for all of us.

DERICK: I love others, but I will not compromise the truth of reality, just to appease the delusions of others. If someone were to do that to a mentally ill family member, it would be cruel, and others may even think you’re making fun of the person. 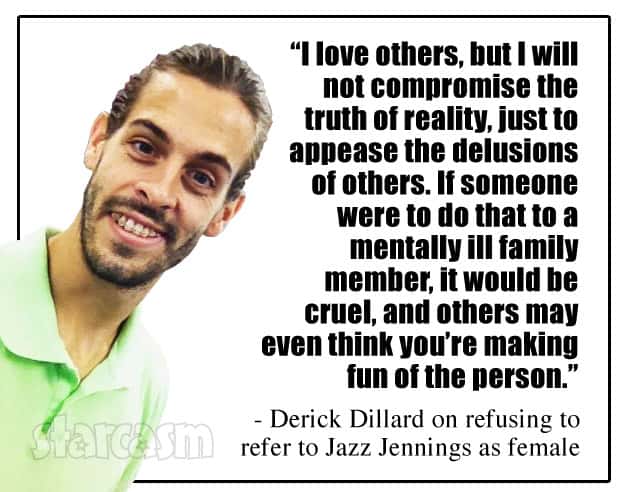 TWEETER: It may not be your reality, but it is Jazz’s. Many people do not believe God is a real, but that does not stop us from believing.

TWEETER: I just think your approach seems a little hostile instead of welcoming and inviting. If I were in the LGTBQ community I would be very skeptical of your intentions. I may not agree with someones lifestyle But I’ve come to find that it’s better to meet people where they are. I don’t really think that’s the same thing but ok to each his own that’s between you and God. All I’m saying is people can’t hear what you’re saying when they feel attacked. I’ve never seen a missionary start out saying you’re all heathens you’re going to hell now come n worship

DERICK: Yes, but meeting someone where they are doesn’t mean joining them in their delusions.

TWEETER: Look I totally understand what you’re saying but nobody really understands what goes on the womb I don’t know why Jazz feels the way she does. You’re trying to reach out to a group of people in a very negative way. Jesus didn’t shame people into believing in him.

DERICK: I’m not trying to shame anyone.

TWEETER: Being transgender is not delusional. Just because you keep saying it, doesn’t make it real.

Derick called out the “Duggar Family News: Life is not all pickles and hairspray” Facebook page for its response to another of his tweets last month.

Shortly after the Parkland shooting, Derick wrote, “This has gotten a little ridiculous; at least 2 networks are now using kids to push their liberal agendas,” in response to CNN sharing comments made by Parkland shooting survivors. “It’s obviously not all about the kids when voices like @KyleKashuv aren’t as elevated. Liberal Media… at least be consistent so you can hide your biased tactics better.”

The Duggar Family News admin responded at length — here are a couple of excerpts, including the accusation that Derick has not reached out to Jazz:

If TLC is using Jazz to push a Liberal agenda then they must also be using the Duggar kids to push an extreme right-wing agenda. If that’s true then the agendas cancel each other out. Problem solved for silly ole Derick.

Derick claims to care about the kids….does he really? Derick has never reached out to Jazz Jennings to ask her if she is okay. If he truly thinks adults are manipulating Jazz then reach out! Talk to John Rotan who works on Counting On. He worked with Jazz. If Derick truly cares about the teen survivors of Parkland then maybe he can reach out to them and ask what they need and how can he help. Get to know them! See if they are truly being used. He won’t though because he doesn’t give a crap about Jazz or the child victims of gun violence. He doesn’t want to burst his Liberal hating bubble and actually get to know God’s children. That would be just too hard.

Derick responded to @PHairspray‘s link to the Facebook post by revealing that he actually has reached out to Jazz — aka “him.”

“Guess what…I’ve tried to reach out, but it’s not that easy without a way to contact him,” Derick said. “Do you really think everything in reality is only what’s public? How would you know if I tried to reach out?!”

The question of whether or not Derick and the rest of the Duggars use their children to push an agenda (just as Derick criticizes TLC for doing with Jazz) also came up on Twitter. And, in his elusive responses, Derick revealed some information about the birth of his and Jill’s son.

This conversation started after Derick shared an article by In Touch Weekly titled “Just When You Thought Derick Dillard Couldn’t Get Worse, He Slams Parkland School Shooting Victims.”

Here’s the conversation, which includes Derick mentioning that his son spent two weeks in the NICU:

DERICK: No, I criticized the media’s use of kids again…like @TLC uses Jazz. My heart goes out to the victims, but all ideas should be heard, and subjected to criticism.

TWEETER: But it’s cool for you to exploit your kids on tv? Or your in-laws to exploit theirs?

DERICK: We’ve never chosen to do that.

TWEETER: There is literally video of your family using children to stump for Santorum and Huckabee. Including the minor children talking about how those guys will protect gun owners rights. You absolute walnut.

DERICK: Yes, and (side note) it wasn’t aired by TLC either. I’m talking about an outlet that’s supposed to be a balanced source of information, not selective, uncriticized reporting, fueled by partisan ideology.
…and I prefer pecans to walnuts.

TWEETER: Your job is to protect your kids. Not use them as meal tickets.

DERICK: Does that mean I shouldn’t have gotten the hospital lunch while my son was in the NICU for 2 weeks?

TWEETER: You still haven’t answered if @TLC compensated you for your children’s appearances. If that’s how you chose to do things in your family then I suppose that’s up to you but it’s pretty damn hypocritical to turn around and accuse others of exploiting children when you do the same.

Derick then tripled (quadrupled?) down by responding to an Inquisitor article titled “Derick Dillard Spills: ‘Exploitation’ By TLC, Sam In The NICU, More” with this tweet:

We even requested that they help with some of the medical expenses from the birth that they made a pretty penny on, but they refused to help cover any of those costs. It was close to a year before we made the last medical payment.

So far, there has been no response from Jazz, but I imagine her representatives are contemplating their terms of acceptance as I type. Jazz and Derick sitting for coffee sounds like an irresistible offer — especially if Derick somehow consents to filming. Stay tuned!