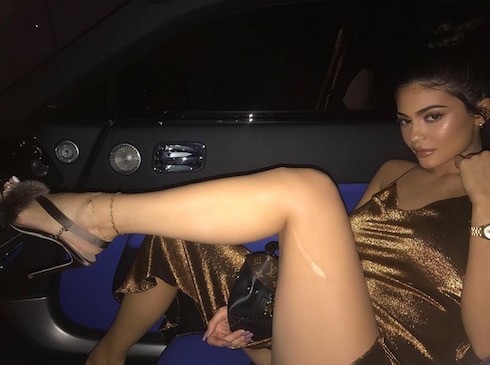 Kylie and Tyga’s relationship has been dead for months, but it somehow keeps finding ways to entertain us. The latest case in point is this delightful new article from Refinery29, which points out that Tyga all-but-declared his foot fetish in a recent–and completely unrelated!–video he shot for Genius’ “Official Lyrics & Meaning” series. One minute, he was breaking down the subtleties behind his track “Move to L.A.”; the next, he was getting us all thinking about how his Kylie Jenner foot fetish affected their time together:

Probably the first thing I look at, when I see a girl physical-wise, is probably, like, you notice, right, like, their mouth, or their teeth–the smile, whatever. And the second thing is the toes.

Which also helps us make a *lot* more sense of this infamous but largely-overlooked Snapchat upload of Tyga taking a lint roller to Kylie’s feet last fall:

And, of course, it raises a ton of questions about the specifics of Tyga’s Kylie Jenner foot fetish (though, kudos to Tyga for explaining as much as he did in the video that sparked this whole debate). Like, do feet completely covered by shoes still do it for him? And, if so, is that why Kylie shared four shoe-selfies in five days last August, shortly after rumors had it that they had gotten married in secret?

Likewise, was Kylie really just trolling Tyga when she shared both a photo and a video highlighting her toes and the graceful, flamingoesque curves of her feet this past March, just as reports of their fifth and final breakup began to surface?

And were any of the many bikini and swimsuit shots from assorted Kardashian vacations and Kylie-and-Tyga getaways really just misdirection? Were we all looking at Kylie’s ass when the real prize was just a few feet below?

Looking back at Turks

Is it possible that Kylie ever got her feet dirty to kill Tyga’s mood?

time of my life ⭐️

What does it mean when your girlfriend flaunts her feet while stepping out of the car she had to buy back from the repo man after you bought it for her but couldn’t make the payments?

And which of the many candid shots on Kylie’s Instagram were both taken by Tyga and taken with something other than fashion in mind?

It’s unlikely that we’ll ever know for sure. But good luck ever seeing Kylie Jenner’s feet the same way again.