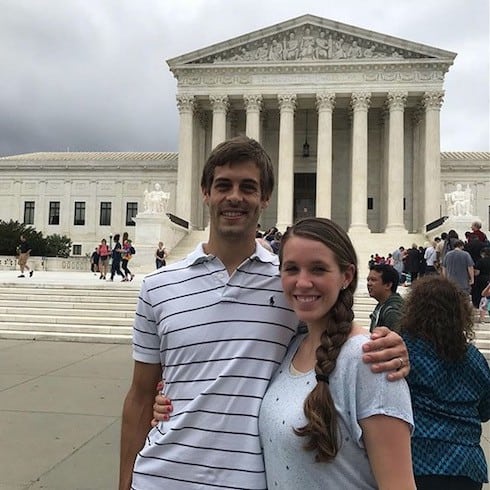 For the first time since Derick Dillard was fired by TLC, the embattled former Counting On star has offered his thoughts on the matter, as well as on the continuing controversy regarding transgender rights. However, in something of a surprise counterpoint, at least one other family member seems to think Derick might have been in the wrong.

It may not surprise you to hear that Derick’s stance post-firing–which firing will most likely free TLC from all anti-transgender controversy for the foreseeable future, and keep Counting On on the air indefinitely–is a little bit aloof, and a little bit defiant. Here are his first tweets since being let go:

Thank you to all those who have supported us and given us so many words of encouragement recently. God bless you all!

“A joyful heart is good medicine, but a crushed spirit dries up the bones.” (Proverbs 17:22)

“Many are the plans in the mind of a man, but it is the purpose of the Lord that will stand.” (Proverbs 19:21)

In addition, Derick also shared the following meme on Instagram after TLC fired him:

(A related note: The above image has become one of the most widely misconstrued and misappropriated on the religious right over the past few years. The quote–which the image implies is from Duck Dynasty‘s Phil Robertson, though it isn’t actually attributed to anyone–actually comes from pastor Rick Warren. Warren gave the quote to the Christian Post in March of 2012, in response to reports that he believed Christians and Muslims worshiped the same god.

The image Derick shared, however, achieved viral infamy following the Supreme Court’s 2013 decision in United States v. Windsor, which overturned Section 3 of the Defense of Marriage Act, opening the door for the terms “marriage” and “spouse” to apply to same-sex unions as well as opposites. Since then, the meme has been applied to basically every front of the culture wars–including transgender rights, the one that got Derick Dillard fired–though it originally had nothing to do with them.)

But it seems that all members of the Duggar family are not in lockstep behind Derick. As The Hollywood Gossip pointed out, shortly after news of Derick Dillard fired broke, 31-year-old Amy (King) Duggar took to twitter with her own thoughts on the issue. And hers were rather more compassionate:

You might not agree with someone or their lifestyle but you SHOULD be compassionate and show God's love regardless to everyone.

I have friends that are gay and I still love them as a person. Thank you for following

Filming for a Derick Dillard-free Counting On is expected to begin early in 2018.