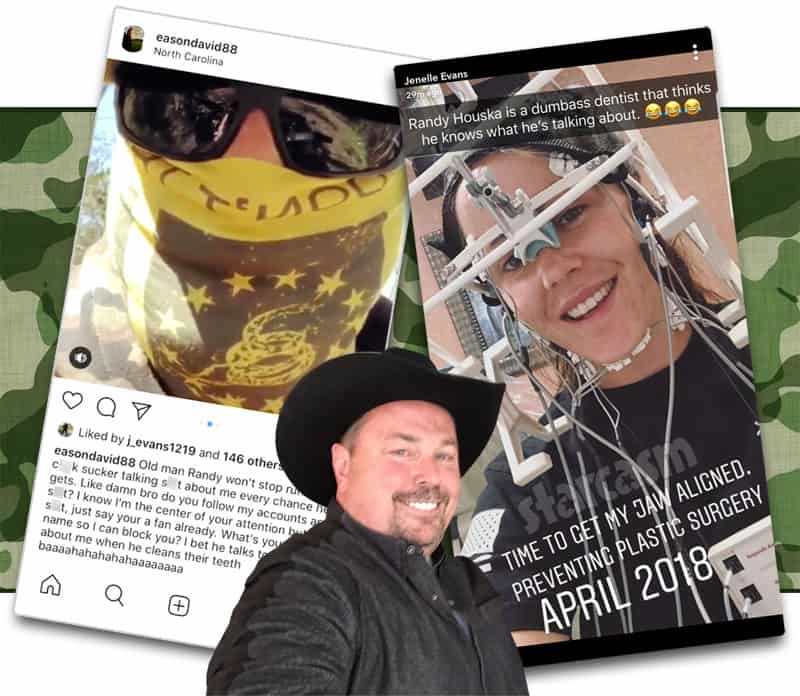 Jenelle Eason’s husband David Eason is on the offensive today! Hours after he attacked Kail Lowry, her mom, and Lux’s dad Chris Lopez in a series of comments on Kail’s Instagram photo, David shared a string of disturbing videos calling out Chelsea Houska’s dad Randy Houska, including and offer to re-align Randy’s jaw.

First, let me set the stage a little bit for the latest social media scuffle between David and Randy. Jenelle recently revealed that she was having her jaw re-aligned. She says that it is because she’s had a “natural overbite since birth” because her “jaw didn’t properly fully mature.”

Randy, who is a practicing dentist in South Dakota, responded to a Twitter post about Jenelle having her jaw aligned by tweeting: “Jaws are ‘re-aligned’ after they have been ‘un-aligned’.” Many speculated that Randy was alluding to the possibility that perhaps David had injured her jaw, speculation fueled by the recent 911 call placed by Jenelle in which she claimed to have been assaulted by David. “I think I heard my f**king collarbone crack!” she told the 911 operator through tears.

Immediately after news broke about Jenelle’s 911 call and her trip to the hospital, Randy called out David specifically. “David Eason is a tiny, insecure bully of a little man in an adult body,” he tweeted. “No child should be anywhere near him.”

He later seemed to reflect on Jenelle’s condition, sympathizing with how difficult it can be to get out of a toxic relationship:

Toxic traumatic bonding is no cake walk to overcome. One first has to recognize it in themselves. This may take time and professional help. Then separation must occur, this can be the hardest part to stick with. Relapses are common and painful.Learn to love oneself first priority

OK, back to the present and Jenelle’s jaw re-alignment. David took to Instagram and posted a series of videos offering to re-align Randy’s jaw and adding that he also knows how to pull teeth.

Here is a screen cap of the since-deleted post, followed by David’s caption and the videos themselves: 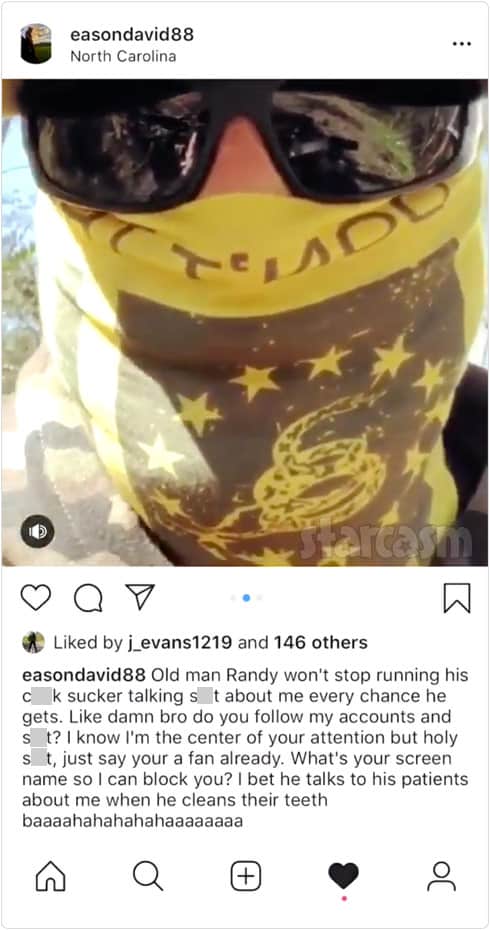 Old man Randy won’t stop running his c*ck sucker talking sh*t about me every chance he gets. Like damn bro do you follow my accounts and sh*t? I know I’m the center of your attention but holy sh*t, just say your a fan already. What’s your screen name so I can block you? I bet he talks to his patients about me when he cleans their teeth baaaahahahahahaaaaaaaa

Wow. If he hadn’t already lost his mind, he certainly has now. Threatening @PapaRandlicious is a huge mistake. David is a #loser #abuser #scumbag pic.twitter.com/uWXjFJLG49

“So, Mr. Randy, let me ask you a question punk!” David begins the first video, trying to sound like a cross between Dirty Harry and Christian Bale’s Batman. “When’s the last time you had your jaw re-aligned? Hey punk? Huh? You need to get it straightened up? I’ll do it for ya, free of charge. C’mon down to my dentist office, bud. I can even pull teeth! I ca re-align your jaw.”

David returns with an altered version of the “Don’t Tread On Me” Gadsden flag wrapped around his face as he continues his anti-Randy diatribe. “So you’re trying to tell me that some grown ass man who is supposedly happy in his life,” David says, inserting a couple Beavis and Butthead inspired giggles. His voice then goes into a super high falsetto as he asks: “He gotta keep talkin’ sh*t about me?” His voice comes back down to almost normal. “Hmmmm. Why though? Hm? Why keep talkin’ sh*t about me Randy? Hm? Got nothing else to talk about? Hm?”

David then offers up his own potential theory. “Oh, maybe you don’t got enough people coming into your dentist office? Hm, hmmm, hmmmm.” 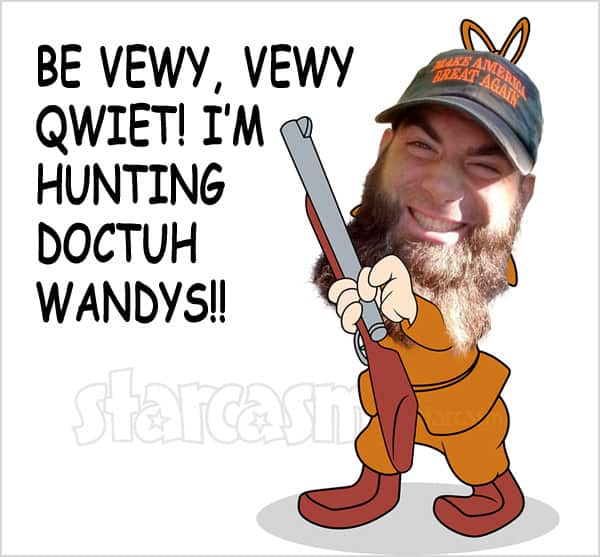 In the third video, David is still wearing the Don’t Tread On Me flag acrss his face, but this time with some of his beard hair pulled up and out around his nose. “So you guys wanted me to grow my moustache out, heh? Hmmmm. Hmm. Hmm. I grew my moustache out just for you. Just for you. Since you guys wanna talk so much sh*t.” This is, of course, in reference to David’s infamous Amish good ol’ boy look with his long beard and no hair on his upper lip — which is reportedly necessitated by his “job” as a scuba diver.

David then addresses his facial attire. “Does this flag offend you? Are you offended by this flag too?” he asks, obviously referencing his recent photo draped in a Confederate flag. “‘Cause you know what it means?” he continues. “I GOT GUNS! DON’T F**K WITH ME! And I got vicious dogs. Very, very vicious, right? [pans down to his small dog.] Right babe? Right baby dog? Nugget! Nugget, tell ’em you’ll get ’em! Tell ’em ‘I’ll get ’em!’ She’ll f**k…”

Someone tweeted David’s video and tagged Randy, and he responded by joking: “LOL, maybe I should send a #CeaseandDesist,” in reference to the cease and desist letters sent out late last year by Jenelle to cast members of Teen Mom 2 as well as members of the media. “I think I caught the dumb watching this,” @GraceReport said in response to the clips. “There is plenty to spread around,” Randy replied.

Meanwhile, Jenelle has been posting some photos from her jaw re-alignment, including one specifically for Randy: 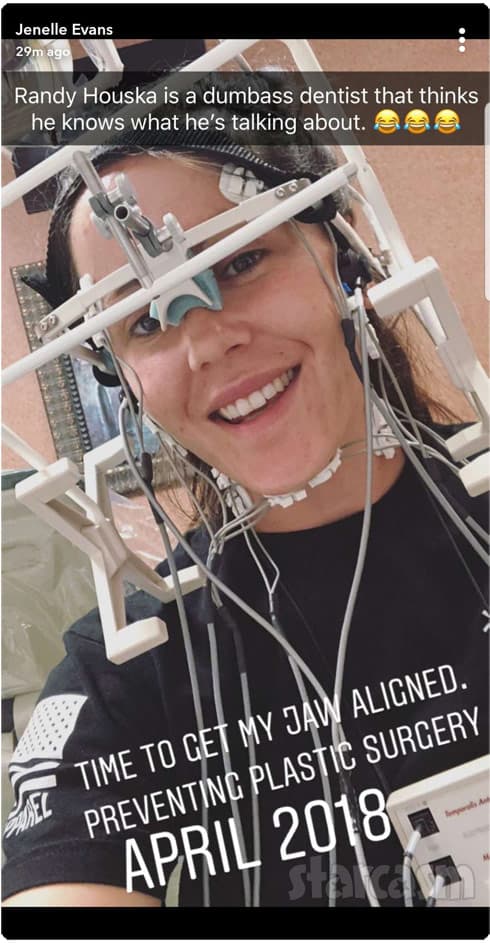 As far as David, I don’t think they offer re-alignment for his issues.