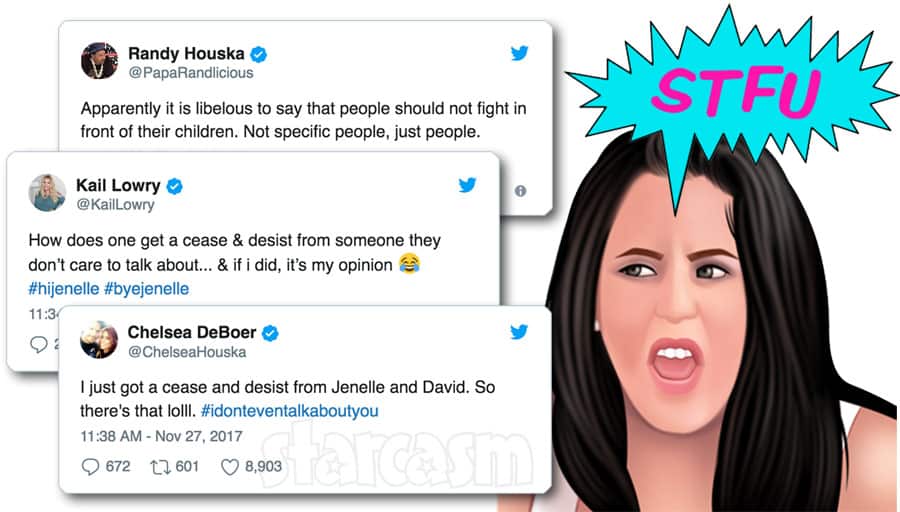 It seems that Teen Mom 2 star Jenelle Eason is not only upset about how she is portrayed by show producers, but also how she is portrayed by her Teen Mom 2 co-stars. Kailyn Lowry, Chelsea DeBoer, and Dr. Randy Houska all took to social media today to respond to the fact that they received cease and desist letters from Jenelle and her husband David Eason. As you might imagine, the responses were a collective shaking of the damn heads.

We will start with the usually drama-restrained Chelsea:

I just got a cease and desist from Jenelle and David. So there's that lolll. #idonteventalkaboutyou pic.twitter.com/ip3FfXWPo1

A Twitter user commended Chelsea on her animated gif selection and an appreciative Chelsea wrote “Thank you lol it matches my exact face when I saw it.” Another follower responded with “Imfao what?!” to which Chelsea replied: “I have no idea haha.”

A “hatter” account pointed out that Jenelle and her verified social media accounts say more negative things about Chelsea than the other way around, and Chelsea agreed:

A few years ago she tweeted that I was on drugs ? but here we are lol

Chelsea is asked what exactly Jenelle demanded that she cease and desist from doing, and she says “Making false and defamatory statements. But….? I never did? So? ? who knows”

Chelsea’s dad, Dr. Randy houska, also got in on the incredulous responses. “Apparently it is libelous to say that people should not fight in front of their children. Not specific people, just people,” he tweeted, referencing his comments from last month that ignited Jenelle online. “Actually libel is written, slander is spoken so . . . #nofighting” someone responded, and Randy asked in response: “What about tweeting?”

Randy concluded his responses with one of his trademark zingers:

My main disappointment today is that the letter wasn't from Dustin. That woulda been sweet.

Jenelle’s co-star Kail Lowry also received a cease and desist letter from the Easons, and she was just as befuddled as Chelsea:

How does one get a cease & desist from someone they don’t care to talk about… & if i did, it’s my opinion ? #hijenelle #byejenelle 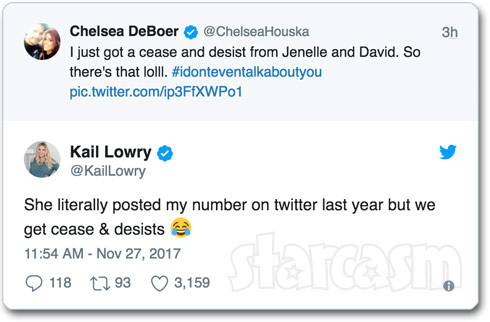 So far, Leah Messer has yet to reveal whether she got a cease and desist letter from Jenelle and David. Also, new cast member Briana DeJesus hasn’t mentioned anything either, but that makes sense because she and Jenelle have become close — plus, Briana has apparently quit Twitter for now.

UPDATE – I didn’t even think about Jenelle’s mom Barbara Evans, but apparently she got a cease and desist letter too! Barbara made the announcement on Instagram along with a photo of herself:

Well Girls I'm joining the group!!!!!! I also got my Cease and.Desist Papers today. From Mr and Mrs Eason

“It comes to our attention that false statements of accusations of drug abuse and child abuse disparaging Mr. and Mrs. Eason’s characters have been made by you,” the letter shared with Radar Online reads.

Barbara was as befuddled as Jenelle’s co-stars. “I don’t say anything that isn’t true,” she tells Radar. She tells the site that she passed the letter along to her attorney and garnered a similar response. “My lawyer said ‘What is this? Oh my God. They are crazy.’”

She told Radar she had given the letter to her own attorney. “I think it is comical myself. My lawyer said ‘What is this? Oh my God. They are crazy.”