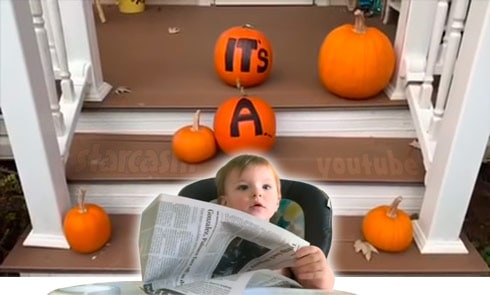 It has been five months since Unexpected star McKayla Adkins found out that she is pregnant with her second child, but the prolific YouTuber had to remain silent on social media due to her contract with TLC. That all changed Sunday night when her pregnancy announcement was featured on the episode, and now McKayla is making up for lost time by posting videos updating her fans on her pregnancy — including a gender reveal!

In case you missed it, McKayla uploaded a video not long after the episode aired documenting her pregnancy journey dating all the way back to when she first found out back in May. She followed that up earlier today with a two-part gender reveal video to let us all know whether or not Timmy will have a little brother or a little sister.

McKayla begins the first clip by pointing out that her family already knew the sex of the baby, so she didn’t want to film a family gender reveal in which they would be forced to act surprised. As a result, she was worried that there wouldn’t be much of a video simply announcing whether it is a boy or a girl with colored balloons, or confetti, or other typical means.

So, McKayla enlisted the help of fellow teen mom YouTuber @LifeOfHope, who recommended a fun craft project that McKayla and Timmy could do together and film. As a result, the first video features McKayla grabbing the supplies, which included four pumpkins and various markers and paint.

Then, McKayla (and Timmy and even Papa Tim) set about creating the props for the actual gender reveal, which happens in the second video. And let me say that my favorite part of both videos is the very brief amount of time that we see Timmy sitting at the table in his high chair looking as though he is reading the newspaper — which is turned 90-degrees on its side. Here’s a screen cap: 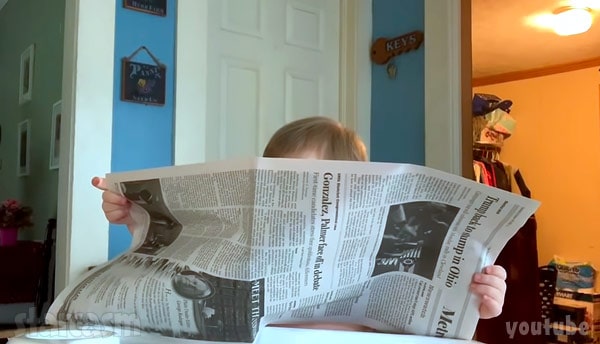 I liked the moment so much that I used a different screen cap to hide the spoiler in the main image of this post.

Here are both videos — and remember that if you want to help a YouTuber mom out, let that initial ad play through until the end! 😉

Speaking of ads, let me toss one of those in here as well as some dots to help avoid spoiling anything for those with wandering eyes…

Congratulations to McKayla and Caelan as they will be adding a daughter to their growing family! And yes, McKayla and Caelan are still together, and YES, IT IS CAELAN’S BABY. For some reason, the paternity issue seems to continue to rear its head on social media — and it’s quite frustrating for McKayla.

She recently enabled her Caps Lock key for this tweet in an attempt to end any and all speculation about paternity for good:

OK, let’s get back to the sunny side of the street… McKayla says that she and Caelan have two names picked out, but she won’t be revealing her name until she arrives. She also revealed that she has a baby registry set up at Target and shared a link.

UPDATE – It appears as though the registry was deleted during the time that I was writing this post, so I removed the link. I know McKayla was receiving some criticism for having the registry, so perhaps she elected to delete it? We’ve reached out to her for clarification and will update if we hear back.

UPDATE – McKayla did respond and let us know that there was a variety of reasons for deleting the registry, including potential scams and the risk of having her address exposed. So, in lieu of gifts from Target, I recommend you send McKayla and her family a gift in the form of a nice comment on YouTube, Twitter, and/or Instagram 🙂

Be sure to continue to follow McKayla’s story with new episodes of Unexpected airing Sunday nights at 10/9c on TLC.