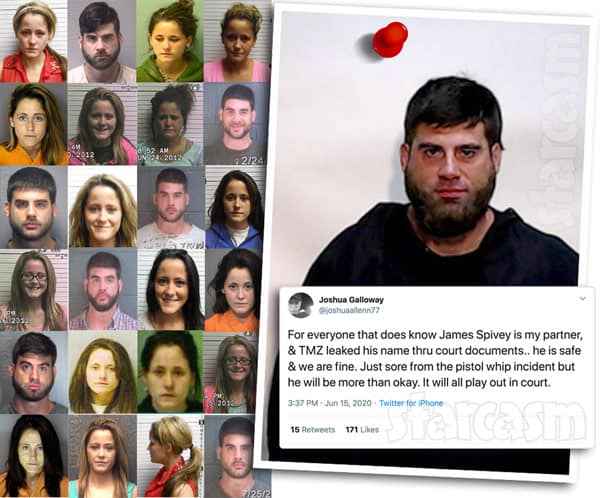 More details are emerging about the arrest of former Teen Mom 2 star David Eason after an altercation on The Land. As we previously reported, David was booked on Friday after he allegedly pistol whipped a male friend of Jenelle’s when she returned to The Land to “collect some of her belongings” after yet another split.

The Sun obtained a copy of the warrant from the incident, and it includes some terrifying (and completely unsurprising) details about David’s alleged threats and attack. According to the warrant, David had a gun and threatened a male friend of Jenelle’s by declaring ““I will blow your f**king brains out.”

David would do more than just threaten, however. The document states that he “unlawfully and willfully did assault” Jenelle’s friend “with a deadly weapon, a Springfield handgun, by hitting [the alleged victim] in the back of the neck and on his back with the handgun.”

TMZ also got a copy of the warrant, and they revealed that the alleged victim in the incident is James Spivey. James is currently in a relationship with Jenelle’s long-time on-again, off-again pal Joshua Galloway. In case you were unable to tell from the names, James and Joshua are gay men.

After the TMZ article, Joshua took to Twitter to provide some updates. “For everyone that does know James Spivey is my partner, & TMZ leaked his name thru court documents.. He is safe & we are fine. Just sore from the pistol whip incident but he will be more than okay. It will all play out in court.”

For everyone that does know James Spivey is my partner, & TMZ leaked his name thru court documents.. he is safe & we are fine. Just sore from the pistol whip incident but he will be more than okay. It will all play out in court.

Joshua then revealed that David pressed charges against James?

TWEET: Please tell him to pursue charges, the highest charges he can. Myself and many others will donate to legal fees, I’m sure of it.

TWEET: It’s a criminal case, so the only person that can represent them is a prosecutor that’s already paid for by the salary they receive from the city or county.

JOSHUA: That isn’t true at all! Plus he retaliated & charged James with the same thing when it was just self defense so we will need a attorney anyways!

JOSHUA: It is but James is gonna need a attorney for his charges too!

I checked the court calendar and James is facing a charge of assault with a deadly weapon with the same July 6 court date as David. Twitter users had a lot of questions, just like I do!

TWEET: How the hell did he get charged with assault? I hope he punched him in self defense or something.

JOSHUA: Yep self defense but in NC anyone can initiate a charge if they swear on oath

TWEET: Wtf is with NC laws and justice? That makes no sense

JOSHUA: We were on private property that he part owns so it’s nothing we could do. It won’t stick in court I don’t think

TWEET: Thank you for helping keep those kids safe

JOSHUA: Only thing I thought of ❤️

Just like everyone who has ever been close to Jenelle, Joshua has had several very public spats with her. Last year the two had a huge falling out after Jenelle thought Joshua sold her out. James sent Jenelle a wave on messenger and she completely blew up. Unkind words were exchanged as Joshua tried to explain that James was innocent and didn’t mean anything. “But lemme guess,” Joshua tweeted on April 28, “I’ll be the bad guy for standing by my man for a simple accidental wave while she stands by her man for bashing the whole gay community. Oh well.”

At some point between April and now, Joshua and Jenelle mended the fence in their relationship. Joshua also manage to make peace with David. “He’s still homophobic” a Twitter user told Joshua after a tweet defending David.

“Idc about his feelings,” Joshua replied. “He’s nice to me. I don’t think it’s what you people think. Y’all are insane.”

To be fair to David, it could very well be that his attack had nothing to do with Joshua’s sexuality. It could have been David just being his usual immature and aggressive self who tends to go overboard anytime there is a confrontation on his propurtee.

#TeenMom2 @PBandJenelley_1's husband @davideportcity goes on a homophobic and transphobic rant that I cannot imagine won't get him booted from the show by @MTV. See all of David's tweets and the tweets he was responding to: https://t.co/jf4vrb1bra pic.twitter.com/udyBqwCCgz

As we mentioned in a our previous post, both pending charges against David are misdemeanors. That’s unfortunate for the human and animal residents of Columbus County because it takes a felony conviction to automatically trigger a firearms ban. That being said, he could still have to surrender his firearm arsenal if Jenelle files a protective order and the judge adds that stipulation. I also believe there is a statue in North Carolina that allows for a sheriff to make a determination that a resident shouldn’t possess a firearm due to past actions?

Speaking of Jenelle filing a protective order, multiple media outlets have confirmed that she has not followed through on her promise to be file one against David on Monday because there is no record in the court system yet.

David has since responded to the assault with a deadly weapon and communicating threats charges filed against him by sharing a Donald Trump, Jr. meme on Instagram depicting Joe Biden as the Scarecrow from The Wizard of Oz.