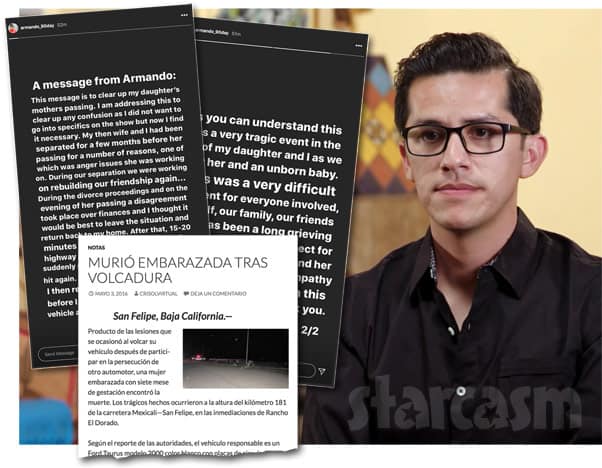 90 Day Fiance: The Other Way star Armando Rubio shared a heart-breaking story during his introduction on the Season 2 Premiere. He revealed that he knew he was gay at a very young age, but in an effort to conform with the macho culture around him, he suppressed his sexuality. He began a relationship with a woman in hopes that his feelings would go away, and the two of them would eventually get married. They welcomed a daughter named Hannah six years ago, but Armando was still struggling with being in the closet.

He eventually told his wife, who got very emotional. The next day, Armando’s wife called his mother into the room and outed Armando to her. His mother was surprised, angry and in disbelief. As a result, Armando was forced back in the closet and he hasn’t talked about it with his mother since.

However, it seems that being back in the closet couldn’t save his marriage as he and his wife split up. “After I came out to my wife, we decided to separate,” Armando said.

Things took a tragic turn soon after the couple’s separation. “Unfortunately, about two or three months after we had separated, she passed away in an accident,” a very emotional Armando recalled. “Her car actually flipped out of the road, and she died on the scene. She was my best friend, so that was very hard.”

Over the weekend, an article about Armando’s wife’s accident on a Mexican news blog began to make the rounds on 90 Day Fiance social media pages and forums. The article had some startling details, including that the accident was the result of a car chase with Armando, and that she was seven months pregnant at the time.

Armando must have been made aware of the news article being circulated, and he shared a statement on his Instagram story clarifying what happened. Here is Armando’s statement in its entirety:

A message from Armando:

This message is to clear up my daughter’s mothers passing. I am addressing this to clear up any confusion as I did not want to go into specifics on the show but now I find it necessary.

My then wife and I had been separated for a few months before her passing for a number of reasons, one of which was anger issues she was working on. During our separation we were working on rebuilding our friendship again…

During the divorce proceedings and on the evening of her passing a disagreement took place over finances and I thought it would be best to leave the situation and return back to my home. After that, 15-20 minutes later I was driving down the highway and I was shocked when I was suddenly struck from behind and then was hit again. As I continued down the highway I then realized it was my ex-wife and before I knew it she lost control of her vehicle and passed away on the scene.

As you can understand this was a very tragic event in the life of my daughter and I as we lost her and an unborn baby. This was a very difficult moment for everyone involved, myself, our family, our friends and has been a long grieving process and out of respect for my daughter’s mother and her memory I ask for your empathy and understanding on this personal tragedy. Thank you.

My heart goes out to Armando, and I want to commend him for how he handled what is obviously a very personal and very painful subject.

Choosing to go on a reality show, especially one as popular as those in the 90 Day Fiance franchise, opens up your past life to scrutiny. That is especially true if something from your past ties directly to the story line you are presenting on the show.

I’m sure it was difficult, but Armando did the absolute best thing he could by being open and addressing it head on. I was already one of many fans pulling for Kenneth and Armando, and now I am even more so.

Despite being burned by numerous #90DayFiance cast members in the past, my heart is ALL IN on #TheOtherWay couple Kenneth and Armando! 🤞 DO NOT break my heart again @TLC! https://t.co/9eCIxIDpmb

Judging from Armando’s statement, it doesn’t appear that he will be bringing up the additional details about his wife and the crash on the show.

To continue following Kenneth and Armando’s journey, keep tuning in for new episodes of 90 Day Fiance: The Other Way airing Monday nights at 9/8c on TLC!

90 Day Fiance: The Other Way Details on Biniyam’s 1st marriage and child with an American woman