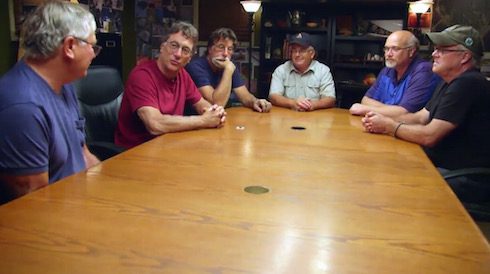 Thanks to the latest news from both History and the show itself, we can now confirm that this season of The Curse of Oak Island will officially be the biggest the show has ever done. But does that mean Rick and Marty finally find treasure? Based on what we know in the way of Curse of Oak Island Season 6 spoilers, the Laginas’ latest discovery may be the most promising yet.

We already know that Season 6 will feature even more exploration into Oak Island’s connection with the Knights Templar, something first explored in-depth in Season 5.

But, thanks to a brand-new announcement from History itself, we also have confirmation of one of the biggest Curse of Oak Island Season 6 spoilers of all. Though History never officially renews Oak Island until it’s practically back on the air, this year’s renewal came with the news that Season 6 will total a whopping 30 hours of new material.

Here’s the official wording, via Deadline:

History has renewed six of its biggest unscripted series, including a massive 30-hour Season 6 order for flagship The Curse of Oak Island, which ranks as cable’s top nonfiction series among total viewers in Live +3, averaging over four million viewers. It is believed to be one of History’s largest orders ever.

To put that into perspective, Season 5 — at the time the biggest Oak Island had ever done — ran for 20 hours spread out over 18 episodes.

In fact, every Curse of Oak Island season has been bigger than the last: Season 1 was just five episodes long; Season 2 was ten; Season 3 was thirteen; and Season 4 was sixteen. We don’t know exactly how the 30 hours History has ordered will be split up, though it’s safe to say we’ll see at least a couple of specials akin to last year’s “Knights Templar” and “Family Album” episodes. And speculation has already begun to swirl about the nature of this year’s discoveries.

We don’t know whether Curse of Oak Island found the treasure, but they’re getting better and better at teasing it

As we’ve written before, one of the main factors that plays into the show’s renewal is Marty Lagina’s willingness to spend part of his huge fortune on the yearly dig. (The other main factor is the show’s ratings, which continue to be so absurdly good that Curse of Oak Island is essentially cancel-proof and could be renewed forever.)

So it’s not like Marty needs a huge treasure trove to pay off his treasure digging debts. The joy of Oak Island is in the search. With that said: we get a kick out of the new teaser trailer every year, since the show’s producers are *really* good at making it seem like this season will be the one where Rick and Marty finally hit paydirt.

And the Curse of Oak Island Season 6 trailer is no exception:

“We have discovered new technology that’s gonna make last year’s operations almost insignificant,” Rick says, as embedded mines blow up and computers compute stuff. “For the first time, we can look underground in the Money Pit. It’s a game-changer.”

“There’s no more guesswork,” adds Marty. This prompts Rick to utter the most poster- and T-shirt-worthy line in the trailer: “This year, the dream comes true.”

And the trailer concludes with Marty’s words, as he and Rick talk to their team around the conference table: “We have found our first gold on Oak Island.”

That statement leaves plenty of room for interpretation and wiggling of all sorts. It could be a little gold nugget; it could be a shiny possible-doubloon. Still: How can any fan of the show not watch the Season 6 trailer and get either excited or exasperated — or both?

When does Curse of Oak Island Season 6 come on?

Not to gloat here, but we totally called this weeks before the actual reveal. Oak Island always debuts the first Tuesday in November, and has since Season 2. The only times it hasn’t were when that Tuesday conflicted with another major televisual event — in 2016, for example, Season 4 dropped on the second Tuesday in November, because of election day.

So it turns out that our prediction of a November 13th, 2018 premiere for this season was one of the Curse of Oak Island Season 6 spoilers that we got right. Hopefully, these powers of prognostication will only strengthen as the new episodes air.

You can catch up on old episodes of the show on its official web site. The Season 6 premiere airs Tuesday, November 13th, at 9 PM on History.