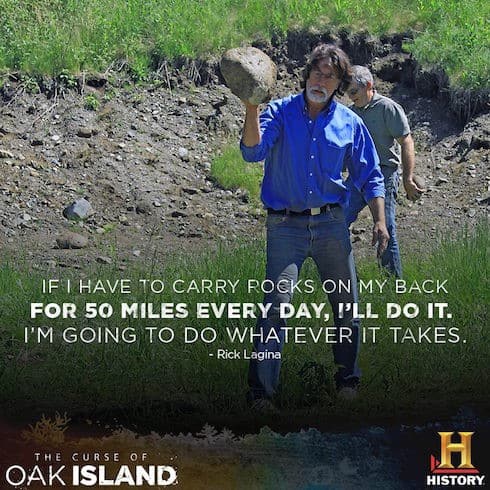 Strong family ties and even stronger ratings have all but ensured that History’s smash hit The Curse of Oak Island will continue to produce tantalizing, frustrating treasure hunt escapades for the foreseeable future–and beyond. Oak Island has been a ratings bonanza for its home network, and is one of the few modern-day shows–reality or otherwise–to actually have gained new viewers, on average, every year it’s been on the air.

The most recent season looks to continue that trend. Following relatively late-breaking news of Curse of Oak Island renewed for a fifth go-round (History didn’t actually confirm the season until four weeks before it premiered), last week’s season premiere debuted amidst huge fanfare and even bigger expectations. The big question: Will this be the year the Lagina Brothers finally find the treasure?

And, ratings-wise at least, the show managed to live up to its own hype. According to ratings tracker TV By The Numbers, the Curse of Oak Island Season 5 premiere had 2.949 million viewers last Tuesday night, or more than double its closest reality TV competitor. In fact, Oak Island‘s viewership reached heights generally reserved for cable news: only Sean Hannity (3.565 million) had more viewers, and only Tucker Carlson (2.939 million), Laura Ingraham (2.909), and Rachel Maddow (2.762 million) came close to Oak Island‘s numbers.

Simply put, networks do not let shows as popular as that disappear from their airwaves. So, unless this season Rick and Marty for some reason change the formula that’s gotten them to the top of the reality heap–by introducing an annoying, racist, puppet sidekick, for instance–it is a virtual certainty that this time next year we’ll be talking about the magical wonders of the Curse of Oak Island Season 6 premiere.

A recent interview with Marty’s son Alex Lagina further confirmed–in typical between-the-lines style–that the Oak Island crew will be digging for our entertainment until further notice. Speaking to alumni magazine Michigan Today, Alex explained that, for him, the main joy of the dig is how it brings his family together–and keeps them side by side doing what they all love.

“[The dig is] an opportunity to spend time with my uncle and dad doing this crazy adventure,” said Alex–who, like his father, is a University of Michigan graduate. “And that’s a great thing.”

Alex further confirmed that he appreciates the network’s committment to Oak Island‘s family-first, history-friendly format. “Paraphrasing my uncle,” he explained, “we wanted to do the search justice and honor the people who came before us in this adventure. We wanted to give them the fullest respect and honor their commitment.”

Alex’s comments reveal another aspect of the Oak Island phenomenon: namely, the amount of control that the Lagina family has over the show. They have absolutely nothing in common with the Kardashian family–this may sound like a stretch, but stay with me–except that their wishes are their producers’ command. They’re at the helm of the most popular show on their network, which means they have more power over how the show is made, which in turn means that they have a more comfortable situation than many of their reality TV peers. Though every season ends with uncertainty over whether the Laginas will return, there’s no reason to believe that they’d voluntarily end something in which they’ve invested literally years (to say nothing of a small fortune).

And of course let’s recall that producer Kevin Burns, the man in charge of ensuring Curse of Oak Island renewed year after year, recently admitted he can see the show going for a decade–and would love to keep it on the air that long. And, since Kevin is the one who persuades Rick and Marty to sign on for a brand-new year at the end of every old one, the longer he does his job, the more new episodes we’re likely to get.

The Curse of Oak Island Season 5 airs Tuesday nights at 9 on History.