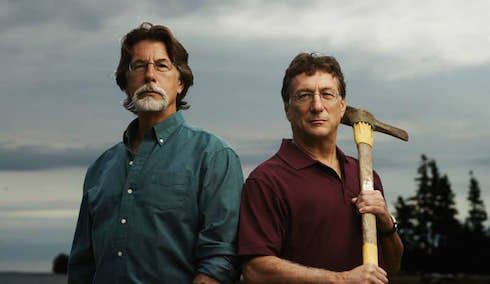 The latest season of the show has been filming for months, and we’ve now got word of the likeliest Curse of Oak Island Season 6 premiere date. Based on everything we’ve picked up from the production staff and the dig itself, it looks like the new episodes will begin airing in early November — and will pick up right where Season 5’s deepening mysteries left off.

As we wrote while Season 5 was still airing, everything about Season 6 points toward a further exploration of Oak Island’s connection to the Knights Templar. And, as the good people over at Monsters and Critics have pointed out, the season-ending “Drilling Down” episode revealed a much larger cache of discoveries than viewers had seen. (Perhaps most tantalizing among these was several more bone fragments, adding to the mystery of the two human bones discovered in the H-8 borehole back in Season 2.)

Of course, Oak Island has never lacked for stones to literally and figuratively overturn. The biggest obstacle the show has faced has always been the willingness of both Lagina Brothers to return: Rick to gin up the same enthusiasm year after year, and Marty to keep fronting the money.

However, given that Marty Lagina’s net worth is apparently in the mid-eight figures at least, and given that Rick’s desire appears undiminished, it’s safe to start speculating about the Curse of Oak Island Season 6 premiere date. This time last year, we predicted an early November premiere for Season 5, and have no reason to expect otherwise this year.

Since Season 2 — the first full season for the show — the premiere has fallen on the first Tuesday in November twice (for Seasons 2 and 5), and on the second Tuesday in November twice (for Seasons 3 and 4). And your average reality TV programmer’s desire for consistency would make a drill sargeant proud. We’re willing to bet that Oak Island Season 6 will drop on Tuesday, November 6th, 2018 — although the following Tuesday, November 13th, is also a strong possibility (especially when you remember that the midterm elections are on November 6th).

In either case, we’ll state once more for the record that Curse of Oak Island is effectively cancelation-proof. Even though History has yet to officially announce the show’s Season 6 renewal, we know, thanks to the wonders of social media, that Rick and Marty have been on and off the island for months. Behold, good-natured on-site hobnobbing with fans:

We met Rick and Gary!! ??? #oakisland#curseofoakisland

Those who watch the show The Curse of Oak Island may recognize these guys! #RickLagina #AlexLagina #CraigTester #GaryDrayton #CharlesBarkhouse. What a great way to end the tour of the island! I can’t wait to see what happens next! #thecurseofoakisland

We’re willing to bet a whole trunkful of obscure artifacts that Curse of Oak Island Season 6 will premiere in early November 2018. Until then, you can get your stream on over at History.