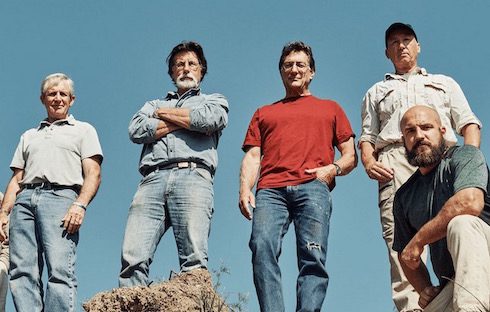 The #1 show on cable is a few weeks away from concluding its 5th season — but the Curse of Oak Island news is still coming fast and furious. We’ve got a sneak peek at the final Season 5 episodes, plus a few indications of what fans can expect (in addition to more lessons in prolonging a mystery) from Curse of Oak Island Season 6.

A Monsters and Critics preview of two late-season episodes confirms that the show will continue its recent obsession with the Knights Templar and the role they may have played in the island’s mysteries. In fact, tonight’s episode — a special one-off, airing as a stopgap due to the Winter Olympics — is called “The Templar Connection,” and is devoted entirely to the history of the military order, and re-examines every connection Rick and Marty have made so far.

That episode and next week’s “Steel Trapped,” (which resumes the Lagina Brothers’ dig) spend so much time on the Knights Templar that it seems almost a given to say this particular storyline will be carried through well into Curse of Oak Island‘s next season.

After that, it’s only two more weeks until the season ends: History has just confirmed the Season 5 finale will air on March 6th, followed by a “Drilling Down” season recap special on March 13th. (No word yet on whether that special, like last year’s, will run for two hours.)

In other Curse of Oak Island news, History’s smash remains the #1 show on cable, regularly drawing between three and four million viewers per episode. Plus, Marty Lagina is still loaded. So, since the only two factors that could stop new episodes from being produced are both still working in the show’s favor, don’t waste any time worrying about whether there’ll be a sixth season later this year 😉

(On that note, Producer Kevin Burns is actually on record saying he thinks Oak Island could easily go for a decade. If we take Burns at his word, then, the upcoming finale merely marks show’s overall the halfway point.)

Finally, the Friends of Oak Island Society have announced their official 2018 tour dates. That’s right: if you’re devoted enough, interested enough, or bored enough, you can book a trip to the actual Oak Island and go on a guided tour. Fans who make the journey apparently run into the show’s crew members somewhat often, so there’s an added attraction.

There’s a whole spectrum of options, including public, semi-private, and private tours; group options; and discounts based on the number of people in your group. You can check out pricing information here. Thanks to the Curse of Oak Island‘s popularity, tickets sell out within hours of going on sale, so be sharp: this year, the on-sale date is Thursday, March 1st, at 7 PM Atlantic Standard Time / 6 PM Eastern.

While you’re planning your itinerary, remember to tune in to new Curse of Oak Island episodes Tuesday nights at 9 on History.