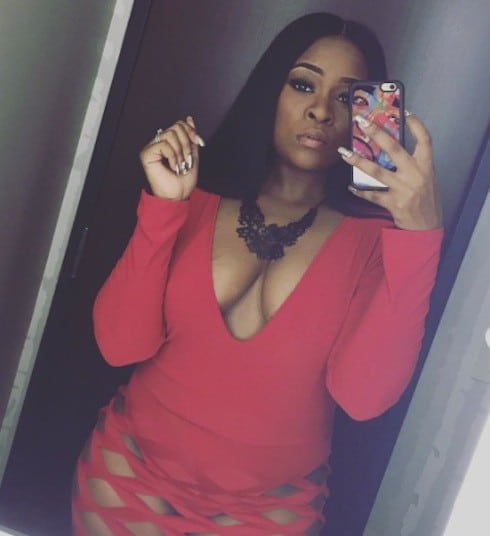 The Black Ink Crew Chicago cast is bigger by one for Season 2: Ashley Pickens, Don’s baby mama, has been officially added to the show following the pair’s engagement. Though many fans were shocked that Ashley stayed with Don despite his cheating ways last year, Ashley recently addressed she and Don’s relationship–and sounded much more positive than you might expect.

In face, her official VH1 bio video addressed Don’s affair with Charmaine, along with Ashley’s motivation for joining the Season 2 cast, and what Ashley expects of her man. Though she definitely sounds like a woman who expects to get what she wants, Ashley is also willing to give credit where it’s due, and her many loving words for Don make their relationship sound stronger than ever:

“I’m a spoiled brat,” Ashley says, straight-up. “I want what I want. And I want it now,” she adds, channelling her inner Veruca Salt quite pointedly. When it comes to her MO, Ashley is just as matter-of-fact: “Everybody knows that I’m all about my coins. Get to know me, and don’t cross me–you ain’t got to worry about that [mean] side.”

Ashley also acknowledges that she was mostly around becase of Don’s story during Black Ink Crew Season 1. “But this season? Oh, baby, I’m a main cast member–as I should be. And [Don’s] my fiancé. So you’re gonna be seeing a lot of me.”

However, lest fans think Ashley is just a one-dimensional addition to the Black Ink Crew Chicago cast, she also made it clear that both she and Don take their love very seriously. “I decided to go into reality TV,” Ashley explains, “because I want the world to see what a real relationship is like….Dealing with men is hard. And it’s really painful sometimes. But, I know if that man really loves you, he’s willing to change for you.

“Last season,” Ashley went on, “me and Don were so rocky–ups and downs–but he finally got it together. He’s doing everything that it takes to be a better man and to make sure that our family stays together. You all will see.”

One thing fans have been seeing a lot of late is Ashley’s high-volume Instagram updates involving herself and Don, and, occasionally, their little one. It sure looks like the two parents are stronger and more devoted than they’ve ever been:

My baby hate taking pictures but love taking snapchat videos ? I love him anywayz he mad I took this picture can you tell? ? #9Mag #blackinkchicago #blackinkcrewchicago #Ashley #rondavutalent #blackinkchi

And you can check out the newest member of the Black Ink Crew cast in action when Season 2 airs starting Monday, October 3, on VH1.