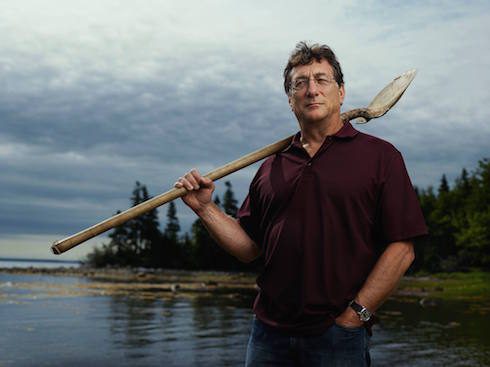 Of all the factors determining whether we get a new season of Curse of Oak Island, perhaps none is more important than Marty Lagina’s net worth. The quieter of the two Lagina brothers also happens to be the money man behind Rick’s exploration — and his willingness to continue doing so may play a bigger role in the project than even History’s involvement.

We’ve written about Oak Island‘s enduring and growing popularity before, and even said that the show is “basically renewed forever” whether or not Rick and Marty ever actually find any tangible treasure. Though ratings remain strong, there are likewise strong signs of critical dissent — consider for example the latest write-up at TV Overmind, which questions just how long the brothers can continue to tease out every possible lead before viewers (to say nothing of critics) throw up their hands and find something new to watch.

And so: enter Marty Lagina’s net worth. Though details of the Laginas’ arrangement with History are private, the younger of the two brothers is believed to be the primary source of funding for the Oak Island dig. If that’s true, it would suggest that History is simply paying the brothers for the rights to film and distribute their adventures, but not the ones footing the overall bill.

Not that it seems like that’s a problem. Marty Lagina’s net worth has its roots in the energy industry; in 2009, Marty sold Terra Energy, the natural gas extraction company he founded in 1984, for a sweet $58 million. Since then, he’s gotten into renewable energy — he’s the founder and CEO of Heritage Wind Energy, the largest wind energy producer in Michigan.

Nor is that Marty’s only major investment. He and his wife Olivia are also the owners of Mari Vineyards, a 60-acre compound in Northern Michigan’s Old Mission Peninsula. The vineyard was one of the first in the state to offer red wines (Michigan’s short growing season makes doing so almost impossible without technological advances), and Marty is a regular at Mari functions when he’s not up in Nova Scotia:

In fact, after considering the many facets of Marty Lagina’s net worth, it’s hard not to arrive at a second conclusion regarding Curse of Oak Island‘s ultimate fate. Marty and Rick both have so many ties to their Michigan home — both personal and financial — that it’s easy to see Oak Island producer Kevin Burns’ end-of-season job getting harder and harder as the seasons pass.

Burns, devotées will recall, is the man responsible for convincing the Lagina Brothers to commit to more episodes every year. In Burns’ eyes, Oak Island “could do 10 years” worth of material, but it’s not the island that needs to be persuaded. As he explained it following the Season 4 finale:

Every year the brothers are very reluctant to agree to do any more. This was always a hard sell for them. They did not approach us. They are not eager television personalities. I think they’re great on TV but they were very wary, which I understand. They were not big reality show people, they didn’t want celebrity, they didn’t want fame. They really didn’t. They’re very humble, particularly Rick. Four or five months a year away from their families and the conditions can be very grueling, and Marty and Rick are wonderful guys…

So, while Marty Lagina’s net worth appears more than ample enough to guarantee a lifetime of digging in the Money Pit, it would appear that there’s more to life than just cold, hard cash. Which, given the Curse of Oak Island‘s increasingly ambitious, ridiculous, and fun storytelling, has kind of become the show’s raison d’etre 😉

Or, as one fan recently put it:

I'm up. May as well get caught up on the #OakIsland mystery. It's easier to decipher than @realDonaldTrump tweets.