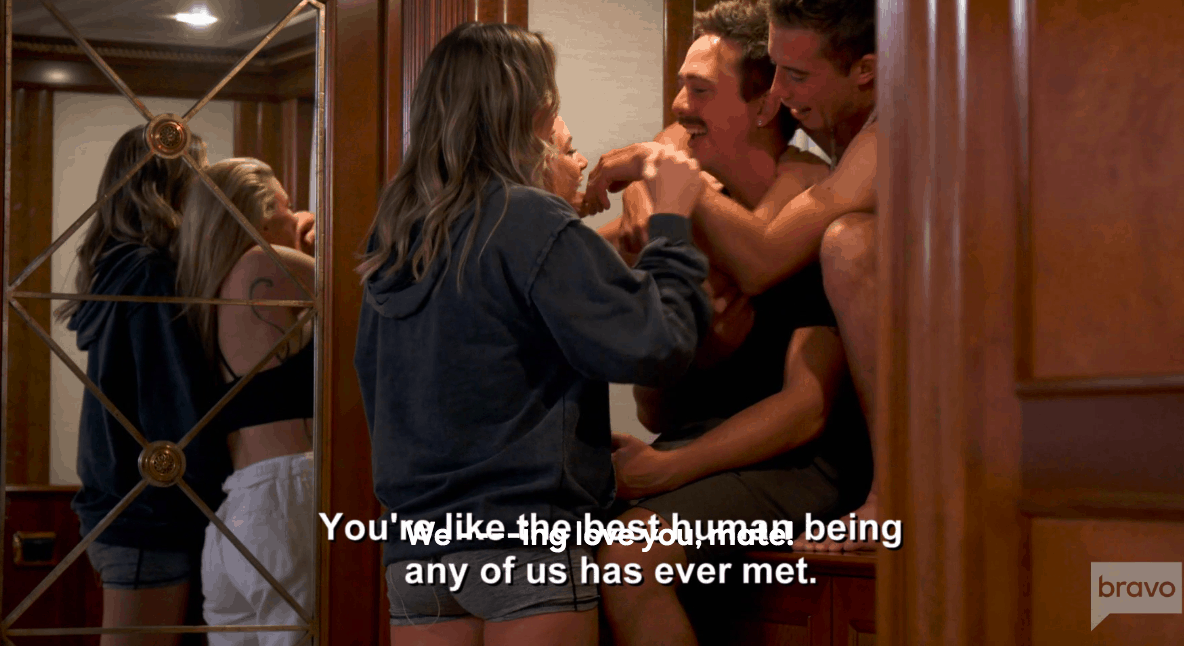 This sixth season of Below Deck: Mediterranean has been a roller coaster of drama and conflict, but also features true friendship and support.

Lloyd has often spoke about how surprised he was to make friends with the crew, and he finds Malia’s kindness to be a welcome difference from his old boss. At the crew’s dinner out on episode 7 where they were discussing the discrimination and bigotry that is rampant in the yachting industry, Lloyd revealed that his old boss would use horribly offensive words. In interview, Lloyd explains that in yachting the owner of the boat can choose not to hire people of certain races, sexual orientation, gender, etc.

On the ride home, Lloyd thanks Malia for being a great boss. He explains that he previously was in a “toxic” work situation. Malia says that she wants to make work fun.

Later, when they were back on the boat and had imbibed a few more drinks, Lloyd tells Katie that he went from a job where he was “like a god to 50 people” to being “treated like a piece of sh*t by his captain. Before Lloyd got into yachting, Lloyd was an European coach driver. He would often take the guests on sailing trips, and loved it so much that he decided to get his sailing license and try working on boats. Unfortunately because of the terrible environment he found himself in his first job, Lloyd had started to doubt if he had made the right choice. Joining the crew for Below Deck: Med Season 6 has really given Lloyd and upward swing for his sailing career.

Lloyd confided in Katie that his first yachting captain had called him a “f****t,” which made him feel bad because “he’s 90% straight.”

He starts crying, and most of the rest of the crew come over to comfort Lloyd and show respect. Katie tells him that that’s no longer his reality and that they need more people like Lloyd in the world. Malia shared that she “swung both ways” in college, and that she still does. David reassures Lloyd that he’s now on a vessel with people who accept him for everything that he is.

“I don’t ever want you to feel that you can’t be yourself because the guys that we have on deck, they’re not those sh**bag guys, they love you,” Malia tells Lloyd. In her interview confessional Malia says that the yachting industry is still very “old school” and expects people to behave and look certain ways.

In his interview, Lloyd says he talks about his sexuality with his best friend, and he thinks the best way to describe it is as a “varying scale” that moves up and down. He questions why anyone would care where someone is on the scale, whether it be really far down one side, or moving up and down depending on where they are in life. He says he’s had this on his mind since he was in school, but has had very few people in his life who would talk about this with him.

Justin Bieber, you are not the father

Lady Gaga to join V Magazine as columnist, needs you to illustrate her