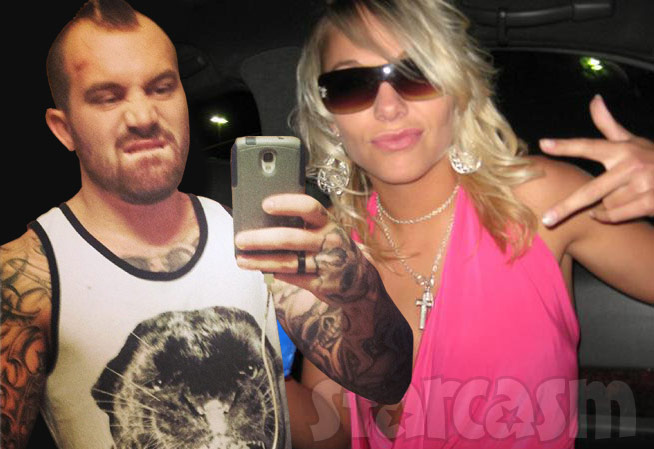 It’s beginning to look like the only thing Adam Lind is worse at than driving is break ups. As we reported earlier, the Teen Mom 2 star was once again back behind bars in South Dakota earlier today after being arrested and charged with domestic stalking of his most recent ex, Brooke Beaton. Although an “inside source” says Brooke is making “untrue accusations” after Adam tossed her out for drinking and doing drugs, Brooke is now telling a different story, and has even gone so far as to file a restraining order against Adam!

Brooke tells Radar Online that Adam “has a very bad temper” and adds, “I am very scared for my safety and for my children’s [safety].”

In the court documents, Brooke cites multiple instances of violence, including an incident on November 28 in which Adam allegedly attacked her while she was watching her seven-year-old son Tayvin race dirt bikes at the Swiftel Center in Bookings, SD. From Radar Online:

“Adam grabbed me by the back of the arms and threw me to the side,” she writes, adding that he knocked the person in front of her down a flight of stairs. “By the time I got down the stairs, he was gone. He took off running.”

She also alleges Lind “threw [her] against a wall and punched a hole in the closet door” of their home in an October 19 incident.

In addition to Adam’s attacks on her, Brooke, 26, says he is also going after her family, which includes son Tayvin and her five-year-old daughter Londynn. “Adam has threatened to kill my family and is also contacting my family on Facebook and also via phone/text,” she says. “There were multiple times he threatened me.”

You can see an additional photo of Brooke Beaton and read about her prior run-ins with the law here.

According to online records, Adam Lind is no longer listed as being in custody.

Teen Mom’s Jo Rivera releases single “Life of a Teen Father Too” as N.I.C.K. b