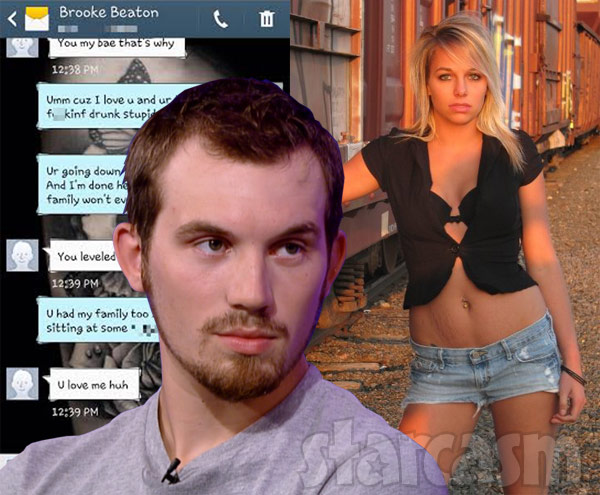 Teen Mom 2 star Chelsea Houska’s ex Adam Lind found himself behind bars once again this week after he was charged with domestic stalking by his most recent ex-girlfriend, Brooke Beaton. Just before Adam’s release on Monday, Brooke took out a restraining order against him, stating that she feared for her safety and the safety of her two children.

In the documents Brooke stated that Adam had been violent with her on more than one occasion, including one incident that allegedly occurred on November 28 while she was watching her seven-year-old son Tayvin race dirt bikes at the Swiftel Center in Bookings, SD. From Radar Online:

“Adam grabbed me by the back of the arms and threw me to the side,” she writes, adding that he knocked the person in front of her down a flight of stairs. “By the time I got down the stairs, he was gone. He took off running.”

She also alleges Lind “threw [her] against a wall and punched a hole in the closet door” of their home in an October 19 incident.

Today a series of screen caps of messages involving Adam Lind, Brooke Beaton, friends and family were published on Teen Mom Truth as well as details about what happened from “a source close to Adam.”

According to the source, Adam has been sober for a year and it was Brooke’s drinking and drug use that initially caused Adam to break up with her. All hopes of a reconciliation were dashed after an alleged incident that occurred while Adam was in jail (on a separate matter I assume) and Brooke went out with a girl friend and two guys. From Teen Mom Truth:

After that incident, Brooke reportedly continued to try to get back with Adam. There are screen caps of interactions between Adam and Brooke in which she asks for sex and goes as far as to threaten suicide to make Adam change his mind.

“Knock it off,” Adam writes at one point after Brooke threatened to kill herself. “I’ll call you in for suicide,” he added.

“Good bye for good,” Brooke responded. That was followed by “Do it, I’ll be dead by then,” “You think you had someone you loved?” and “Goodbye.”

Adam’s response was to remind Brooke of her two children. “Think of londynn and tayvin,” he wrote.

After these exchanges, Brooke reportedly paid a visit to Adam’s house and would eventually call the police to tell them she needed to get inside to retrieve her clothes. Not long after this was when Adam found that all four tires on his truck were slashed. Here’s a photo: 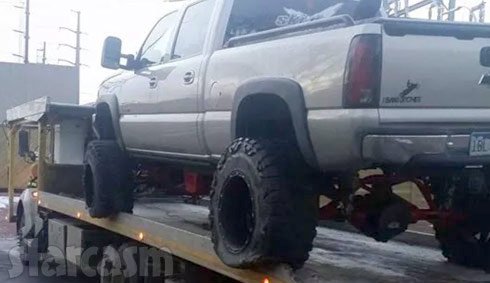 (Click here for another photo of Adam’s truck with the tires slashed as well as his description of what happened.)

The source then explains what happened at the dirt bike race on November 28 that Brooke referred to in her restraining order request. According to him/her Brooke noticed Adam at the race and began texting him to let him know she still had feelings for him.

At some point she began to sit in a man’s lap, and would later trip and fall on the bleachers while attempting to stand up. Adam went to help her up, and because it appeared that the man on whose lap she had been sitting had pushed her, Adam got into an altercation with him and punched him.

There were more text exchanges between Brooke and Adam after the incident where she mentioned Adam punching her friend Richie, but made no mention of Adam attacking her in any way.

Later, Adam talked with Brooke’s mother in another text exchange in which she was expressing her concern over the kids getting mixed up in the couple’s dispute. I 100% understand I know,” wrote Adam. He then added this lengthy, concerned message:

I will not give up on brooke .. I love her .. She needs help Shannon … I know I’m no saint and I’ve done some f***ed up stuff but I’ve changed my life for her a lot .. After she’s lied cheated done drugs and snuck around on me I still wana help her .. She needs a damn intervention or something I wana get her in rehab … I’ve talked to troy a lot about this … I’ve already beat the hell outta some guy cuz he was touching all over brooke in front of me … I can’t help it … If you wana talk more I’d really like that

Cops arrived at Adam’s home Sunday afternoon, where they notified Adam that he was being charged with domestic violence. Brooke had accused Adam of pushing her down the bleachers, and showed a few scratch marks and a bruise to cops as proof. Witnesses tell us that the scratch and bruise were from her trip and fall on the bleachers, and that the only person Adam got physical with was Richie. Adam was arrested and taken to jail, but soon after, Brooke came to the police station and dropped the domestic violence charges, and immediately re-filed charges, but this time for domestic stalking. In her court documents, she claimed that she and her children feared for their safety, and that she needed protection from Adam. It’s odd that a girl who doesn’t have custody of her children, is claiming that her children are fearful of Adam. Brooke’s children’s father have custody of them because of her past which includes drug charges and embezzlement.

Although a judge did grant Brooke a temporary protective order, the site points out that this is common practice when young children are involved. Adam and Brooke are due back in court next week (December 9), and at that time the judge will consider testimony from both sides before making a final ruling.