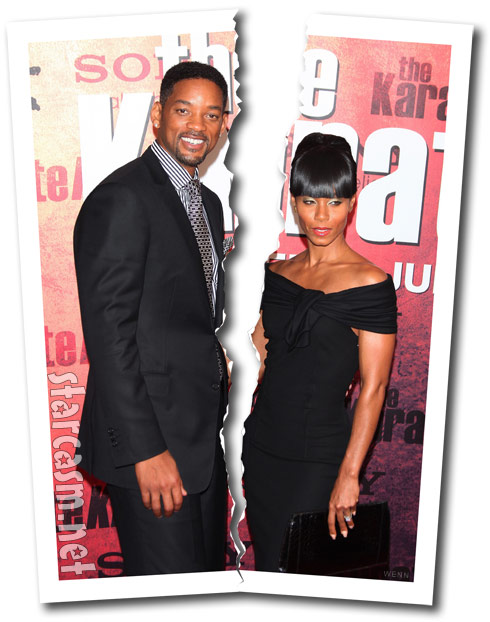 One of the most rock-solid relationships (and one of the most attractive couples) in all of Hollywood may be in jeopardy as In Touch Weekly is reporting that Will Smith and wife Jada Pinkett Smith are separating!

The tabloid announced the shocker earlier today in an online tease for this week’s issue, which hits newsstands in a couple days. Here is all they said on their web site:

After 13 years of marriage, Will Smith and Jada Pinkett Smith have decided to separate, an insider tells In Touch Weekly exclusively. They have two children, Jaden and Willow, together. And Jada is stepmother to Will’s son, Trey, from a previous marriage.

For more on this breaking news story, pick up this week’s issue of In Touch Weekly.

The story also alleges that Jada was having an affair with Hawthorne co-star Marc Anthony.
TMZ contacted Jada Pinkett Smith’s rep, Karynne Tencer, who had one of the most enigmatic responses in the history of public relations, “What? In Touch said that? I know nothing about this … Lord. I’m going back to bed.”

UPDATE – Trey Smith (Will Smith’s son from a previous marriage) has denied the rumored split on Twitter. Here are his tweets:

Will and Jada getting a DIVORCE .. NOT TRUE AT ALL !!

Did #WillandJada split? No they did NOT split ! False information ..its not true RETWEET!!!

And Radar Online has a couple sources close to the Smiths who also deny the rumor:

“No way are they splitting up. They are totally together and are not separating,” a family member said.

Meanwhile, a separate source that works very closely with Smith at his production company, Overbrook Entertainment, exclusively told RadarOnline.com: “The rumors are not true. Not sure who the source was but they are wrong. All is good in their relationship.”

UPDATE – Will Smith and Jada Pinkett Smith have issued a statement addressing the rumors: “Although we are reluctant to respond to these types of press reports, the rumors circulating about our relationship are completely false.” They add, “We are still together, and our marriage is intact.”