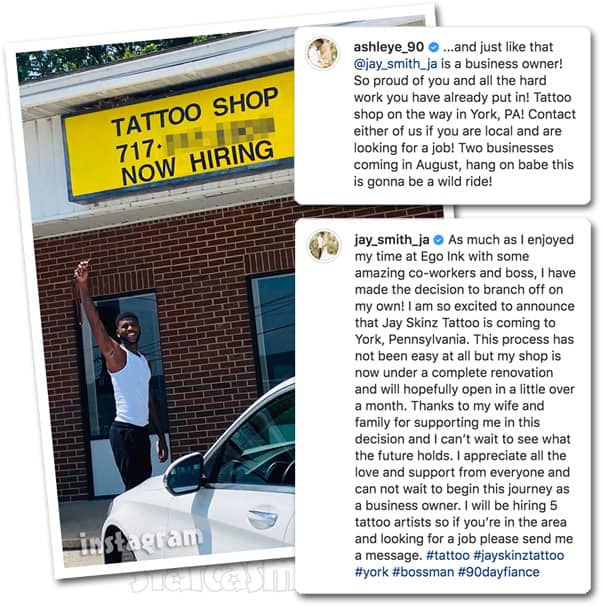 It’s been quite the ride for 90 Day Fiance and Happily Ever After couple Ashley Martson and Jay Smith! In less than three years, the two have experienced three weddings, two divorce filings, numerous infidelities, a rumored sugar daddy, assault charges, an order of protection, an arrest, a rape allegation, ICE detention, a reported lupus flare up and ICU stint, and multiple rumored extramarital pregnancies. So what’s next for Ashley and her deportation-proof gyalis hubby? Jay’s opening his own tattoo shop! And Ashley is planning to open a salon!

Both Ashley and Jay broke the news about his tattoo shop with photos posted in Instagram featuring Jay in front of the future home of Jay Skinz Tattoo. “As much as I enjoyed my time at Ego Ink with some amazing co-workers and boss, I have made the decision to branch off on my own!” Jay began a caption to his Instagram post.

“I am so excited to announce that Jay Skinz Tattoo is coming to York, Pennsylvania,” Jay continues. “This process has not been easy at all but my shop is now under a complete renovation and will hopefully open in a little over a month. Thanks to my wife and family for supporting me in this decision and I can’t wait to see what the future holds. I appreciate all the love and support from everyone and can not wait to begin this journey as a business owner.”

Jay says that the shop will have a staff of artists in addition to himself. “I will be hiring 5 tattoo artists so if you’re in the area and looking for a job please send me a message.”

Ashley shared a similar photo of Jay holding the key to his new shop on her Instagram account and added this message:

…and just like that @jay_smith_ja is a business owner! So proud of you and all the hard work you have already put in! Tattoo shop on the way in York, PA! Contact either of us if you are local and are looking for a job! Two businesses coming in August, hang on babe this is gonna be a wild ride!

After being asked about an actual grand opening date, Ashley took to her stories to share a bit more information. “For everyone asking, we don’t have a set date on the shop opening as we are doing a complete renovation. I don’t want to post a date then something come up during Reno. Estimated opening is August.”

#90DayFiance Ashley shares a crying selfie that was taken "accidentally" and captions it by reflecting on 2019 and her failed marriage to Jay. She promises this will be "the final time I speak on us or our marriage." #HappilyEverAfter https://t.co/77tWQQ78KX

Ashley mentioned in her Instagram announcement that there are “two businesses coming in August,” and she replied to someone in her stories about what that might be. “I live local and a little birdy told me you’re looking at properties for a beauty bar. Is this true?”

Ashley was a bit coy with her response. “I cannot confirm or deny, but who is this birdy.” (Given Ashley and Jay’s extensive track record of “leaking” stories and rumors about themselves, I would put money on the “birdy” being one of them — or even the person who asked the question.) In the comments section Ashley was a little less vague. “I have a makeup line and a salon opening soon,” she revealed.

After the reality star couple announced Jay’s new Jamaicantrepreneurial endeavor, some of their 90 Day Fiance franchise co-stars offered up their congratulations in the comments of the posts. Rebecca Parrott even talked about visiting the shop to add to her tattoo collection!

REBECCA: Maybe I need to make a trip and get some ink! 😍 Congrats on the shop!

ASHLEY: Omg yes! We would love to have you come!

If the barber shop bathroom is a-rockin', then don’t come a-knockin’ because #90DayFiance #HappilyEverAfter's Jay Smith is a free man once again! And it looks like he already has a new woman to cheat on! (The same woman Ashley says might be pregnant) 🇺🇸 https://t.co/OfI6XMbNZA

Here are some more responses from 90 Day Fiance cast members:

PEDRO: Congratulations brother I wish you the best👊🏾💪🏾

DAVID TOBOROWSKY: Wish you guys the best of luck on the new business

MICHAEL JESSEN: Best of luck 🙏🙏🙏🙏 And many congratulations!!

More updates on the rapidly spreading drama plague surrounding #90DayFiance #HappilyEverAfter couple Ashley and Jay, including another rape accusation from Ashley's mother Cindy. Just scroll to the bottom for the latest. #ugh 😖 https://t.co/8ai4hk8ISm

EVELIN VILLEGAS: So happy for you guys

ANNA (Murcel’s wife): Sounds like you are all on the same journey as us! Awesome!

So what do you think? Would you get a tattoo from Jay’s shop? Personally, I don’t think there will be too much all that remarkable about the tattooing area, but I bet the bathroom will AMAZING! I’m thinking it might include a hot tub, waterbed, disco ball and more! He should rename his shop Mullet Ink because it will be business in the front and party in the back!