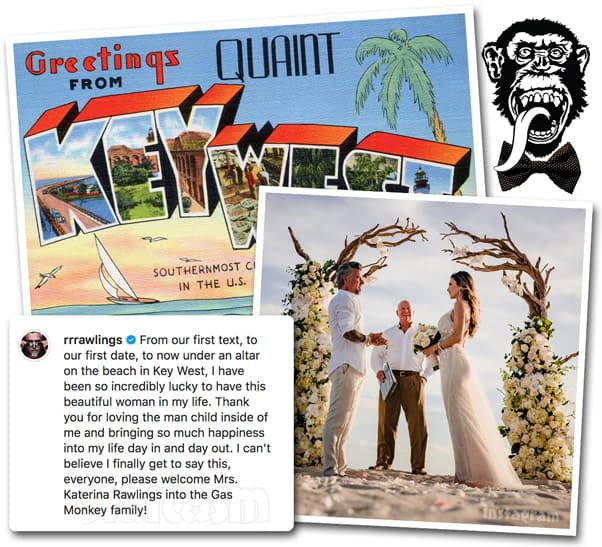 Fast N’ Loud star Richard Rawlings wasn’t about to let a pandemic interfere with his plans to marry his fiancée Katerina Deason! After the couple scrapped their plan for a destination wedding in Greece, they caught a flight down to Key West, Florida and officially made themselves one of the hottest 50-something husband and wife duos on the planet!

Never one to avoid a little attention, Richard teased their imminent Sunshine State nuptials in a series of posts on social media today. “It’s true, me and Kat have absolutely fallen for each other!” Richard began his caption for a photo of himself and Katerina kissing and falling into a swimming pool. “When I was lucky enough to hear Katerina say ‘Yes’, we planned a big wedding in Greece. Well, 2020 wasn’t having any of that, so we decided not to wait any longer and switch up our plans.”

Richard then let the cat out of the bag as far as their revised wedding locale. “We hopped on a flight down to Key West, and well you’re gonna have to keep an eye on my social for the rest of the day to see what happens next!”

A couple hours later, Richard shared a photo of himself and Katerina in Key West as they waited for the Big Event:

Whether it’s Greece or Key West, I’m just happy to have Katerina right here by my side. Now just counting down the hours until the big moment now!

Fast forward two more hours and Richard shared another photo — this time of just himself chilling in a pool with a drink. “Clear skies and not a single worry in my mind right now!” he wrote. “See you on the beach soon Katerina 😉”

The pool image was followed by a shot of a couple ice cold Miller Lites and Richard’s hand-written vows. “Well here we go, see y’all on the other side, I have a beautiful woman to go marry!”

I couldn’t resist zooming in and reading what Richard wrote on the pieces of paper in the photo, and I thought I would share it with you:

I have spent a lot of time in my life thinking of the perfect woman to spend my life with. Sure outward beauty, style, and grace, but what is most important is the KIND of woman she is. Katerina you are are that anyone can ask for. Kind, caring, [obscured], loving, affectionate, passionate, [obscured] you truly are one [obscured]. I am [???] that you would choose to spend your life with me and I promise to give you all of those things in return. I will spend my life taking care of you for God has blessed me with the most perfect woman in the world. God has blessed us by bringing us together and I will be by your side until my last breath.

The next photo Richard shared was a picture from the actual ceremony, included at the top of this post. Richard and Katerina are dressed in white and standing on the beach under an arch made of flowers and driftwood. Richard’s caption:

From our first text, to our first date, to now under an altar on the beach in Key West, I have been so incredibly lucky to have this beautiful woman in my life. Thank you for loving the man child inside of me and bringing so much happiness into my life day in and day out. I can’t believe I finally get to say this, everyone, please welcome Mrs. Katerina Rawlings into the Gas Monkey family!

The post elicited a tidal wave of congratulatory responses, and Richard replied with a single appreciative comment:

I wish I could go through all these comments and tell everyone thank you for best wishes, so sorry for the “reply all” but thank you to everyone, it means the world to both me and Katerina! Time for a good ‘ol fashion Gas Monkey celebration now!

CONGRATULATIONS to Richard and Katerina!

UPDATE – Husband and wife the next day:

If you didn't already know, we're married AF! Since the airline nixed the idea of tins cans behind the plane on our flight back, we'll just play it casual with these shirts.

I did some quick digging in court records, and confirmed that Richard and Katerina filed for a marriage license in Florida on July 1. It’s unclear when the couple made the trip south. Here’s a photo of the two of them getting festive for the Fourth of July that looks to have been taken in Texas:

Find you a love that buys you the perfect shirt for fireworks! 📸: @rhileephotog

Katerina shared some photos from the same shoot and tagged them as Dallas.

In case you were curious, this is the second marriage for Katerina. She was married to multi-billionaire Darwin Deason for ten years before the couple divorced last year. After that break up, Katerina decided to go out and get her a young piece of arm candy in the form of Richard! (Katerina is actually 15 months older than Richard, in case you were wondering.) I just hope she was smart and had Richard sign a pre-nup! 😉

Meanwhile, today was Richard’s fourth time exchanging wedding vows, but Katerina is only the third woman he’s married. Richard married Karen Grames in 1993, and the two were divorced just a year later.

Richard married Suzanne Venegas in 1999, and the two remained together for ten years before divorcing in 2009. However, the couple’s romance was rekindled years later and they made another trip down the aisle in 2015! From our post in September, 2015 about the couple’s second wedding:

Amazingly, this story has a happy ending as Richard and Suzanne apparently hauled their rusted out relationship into the Gas Monkey Garage of love and got it completely refurbished! The two took a trip to Cabo to surprise their friend Dennis Collins on his birthday, and they surprised each other with an impromptu wedding!

Richard and Suzanne’s second attempt didn’t work out, and Richard filed for divorce last March. It was finalized just a couple months later in May. “Richard’s now ex-wife, Suzanne, will get to keep all of her bank accounts plus the 2019 Mercedes SL 450 roadster,” TMZ reported at the time.

Here is a photo of the proposal followed by Katerina and Richard’s captions:

KATERINA: I watched these moments happen in movies, read about them in books, but never really thought it would happen to me. But, God and my Mom in heaven worked overtime to bless me with a beautiful, kind, loving man who has kept me smiling since our first date. I love you Richard with all my heart and I promise to live every day trying to make you as happy as you have made me. ❤️

RICHARD: The very second I laid eyes on you I knew…..

Then only seconds later I realized your unbelievable beauty and grace came from within…..

Katerina you are my everything and I promise to make the rest of our lives full of love and laughter. …

You truly are my best friend and soulmate…..

May God guide us through the rest of our lives as ONE…..

I love you with all that I am.

All I can say is… GYSOT!