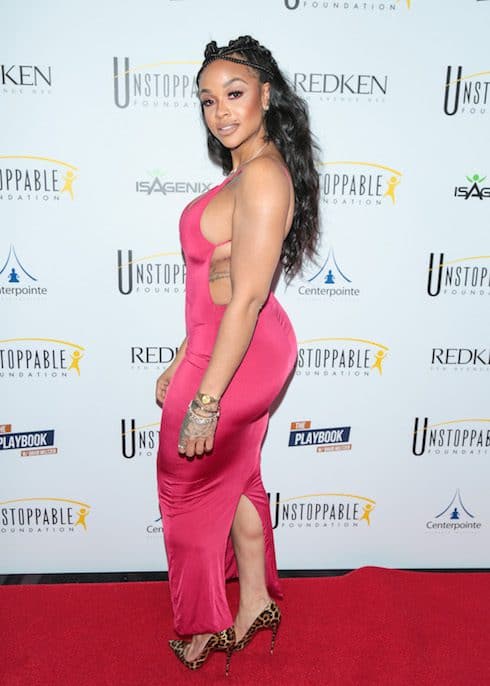 Masika Kalysha made her name as Love & Hip Hop Hollywood‘s undisputed clapback queen. So why did Masika leave LHHH earlier this year, after four successful seasons, only to join the cast of Growing Up Hip Hop Atlanta? Ahead of her GUHHATL debut, Masika explained her decision as only she could, revealing in a Twitter thread and a new interview that she felt like a bad mother by continuing to star on the VH1 hit.

Masika also had a *whole* lot more to say about reaching her breaking point, how she managed to get out of her contract, and her true feelings toward Love & Hip Hop creator Mona Scott Young — which, despite what you’ve probably heard, may surprise you.

Reports about Masika Kalysha leaving Love & Hip Hop Hollywood surfaced early this year. At first, they were largely dismissed, since it’s not unusual for Love & Hip Hop cast members to reportedly quit between seasons (or to threaten to quit during contract negotiations).

But Masika kept playing the rumors up. And as tea from the set of LHHH Season 5 started spilling out, her name was never among those of the cast members involved. This past summer, Masika got the speculation swirling like a master, with her continued use of the #WhereIsMasika hashtag and frequent retweeting of articles claiming that, no, she really had quit the show.

At the time, it looked like Masika had simply quit reality TV for good. It was obvious she really wanted to spend more time with her daughter, Khari Barbie. And, as we pointed out, what Masika Kalysha does for a living extends far beyond television. She’s been acting more of late; her Khari Barbie cosmetics line is doing well; and her 2.1 million social media followers ensure Masika a steady stream of endorsement deals.

Why did Masika leave LHHH?
But the real surprise came shortly before LHHH Season 5 dropped. Not only would Masika not be a part of the cast — she had actually jumped all the way across the country, to join up with the Growing Up Hip Hop Atlanta Season 3 cast.

The WE tv show is a direct competitor with the Love & Hip Hop franchise. Naturally, it was assumed that Masika had some big beefs with the LHHH production in general and Mona Scott Young in particular. However, as Masika recently told Life & Style, that’s 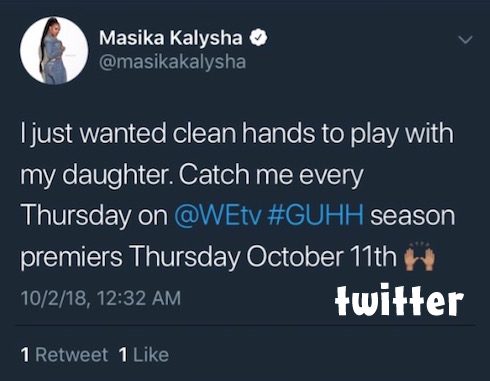 not really the case: she simply needed to make a new move.

“These shows…are very entertaining, but they’re not careers — they’re career moves,” Masika said “So you get on these shows, you have a great platform but you only have a certain amount of time to accomplish something, and I wasn’t accomplishing it. I wasn’t able to showcase my music, I wasn’t able to promote my businesses or what I really do or who I really am. I tried, but pretty much I was made into this character that I’m not.”

Masika explained she was comfortable enough playing that character right up until the moment Khari Barbie was born.

“That’s when I realized, ‘No, I’m not going to do this anymore,” she went on. “I’m not going to allow a narrative to create this person I’m not that my daughter can see one day.”

Masika added that she felt her music wasn’t getting enough attention on Love & Hip Hop Hollywood, and that the GUHHATL production team has been “really passionate about” letting that side of her shine.

Masika got even more heartfelt about leaving LHHH with her fans

Masika’s Life & Style interview was a more formal declaration than the one she made on Twitter a few days ago. She sounded off on her time on Love & Hip Hop and the real reasons she needed to leave LHHH in a passionate evening thread — one that took a few surprising turns.

For one thing, Masika didn’t have any clapbacks for the LHHH crew, or producers. For another, she revealed that getting out of her contract was a lot simpler than most people had assumed — it wasn’t easy, but a good lawyer made the job straightforward enough. Overall, Masika pretty much had only good vibes to share.

So, if you were hoping for total destruction, you’re about to be disappointed 🙂 Masika did start off with some fire, saying that VH1 tried to “black ball” her from appearing on television and that she’d been putting up with the network’s “lies” for three years: 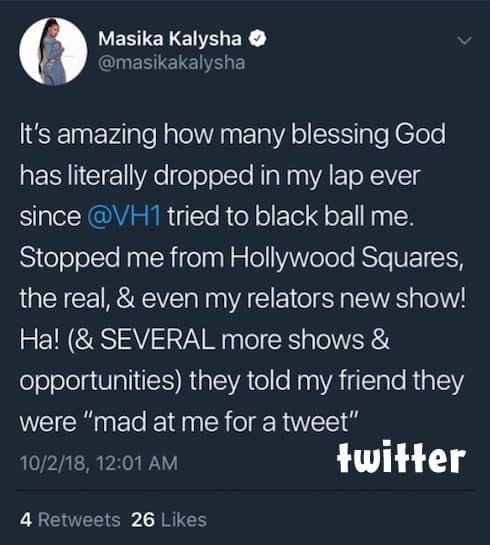 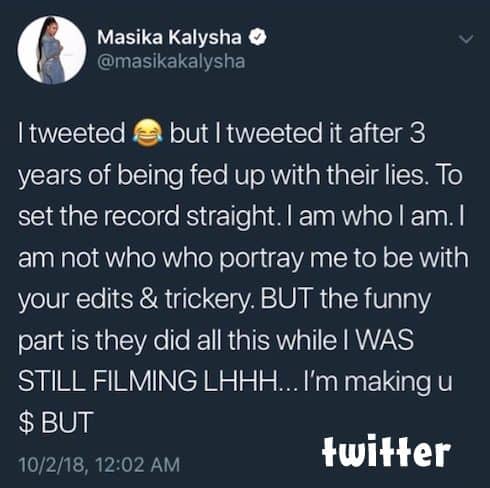 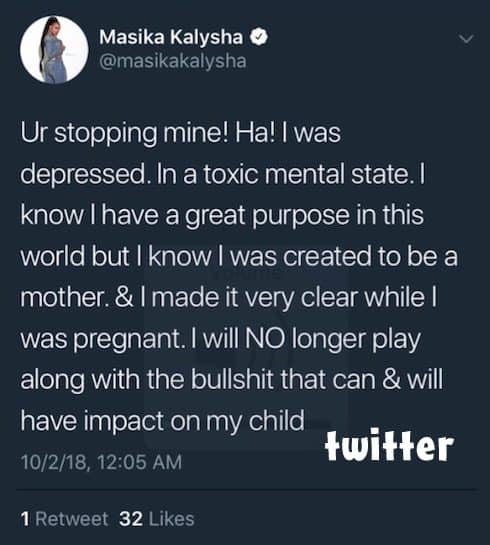 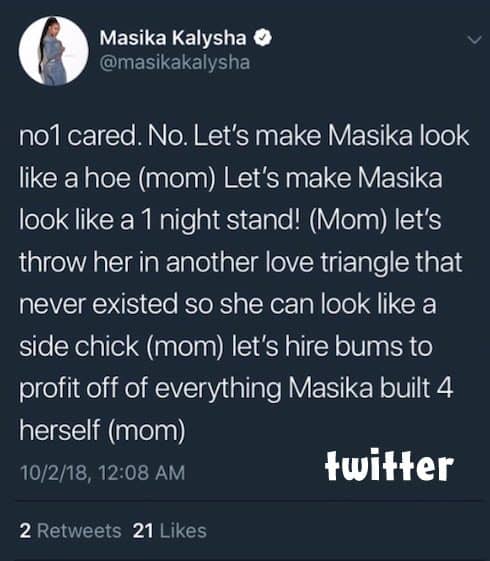 After that, Masika went into more detail about VH1’s attempts to make her “sit.” According to Masika, her attorney’s analysis meant she would have had to stay off of television for approximately five full years: the four remaining years on her LHHH contract, plus one year and one day beyond that. Needless to say, sitting wasn’t an option: 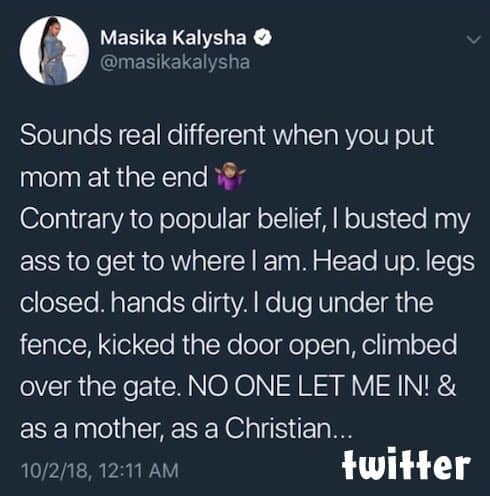 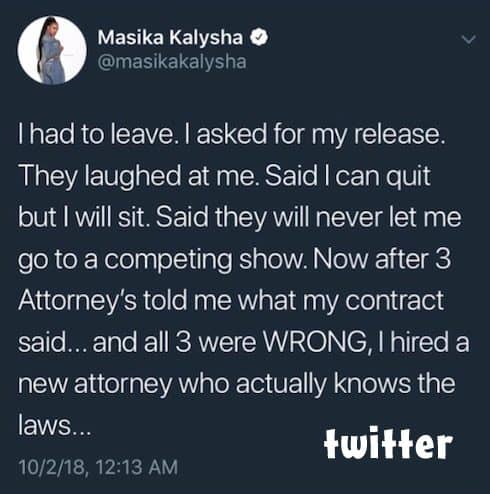 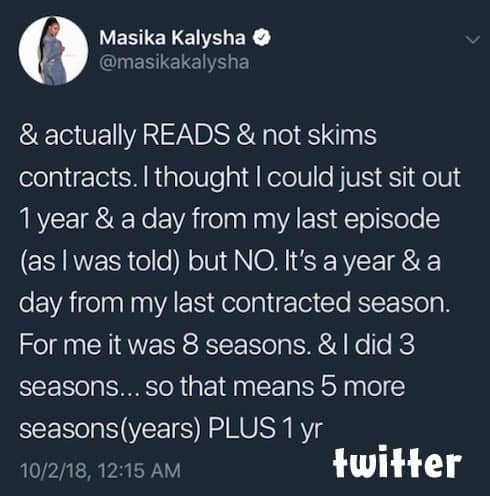 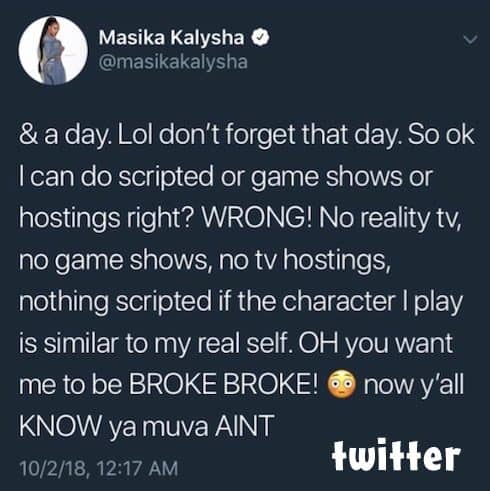 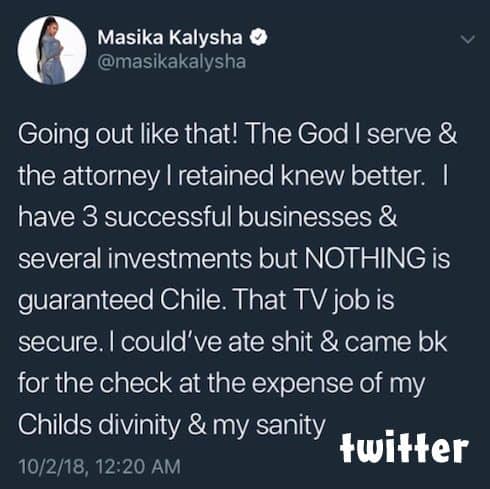 Masika added she’ll be “forever grateful” to Mona and the LHHH producers for giving her a chance in the first place. Mona, Masika pointed out, “has a job to do just like we do,” and gets “a bad rep” simply for being “the ‘face’ of a franchise”: 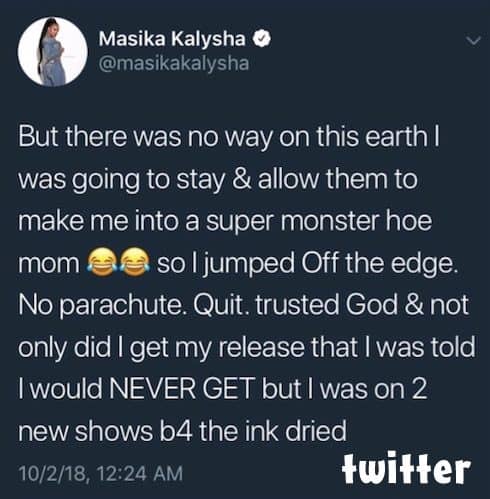 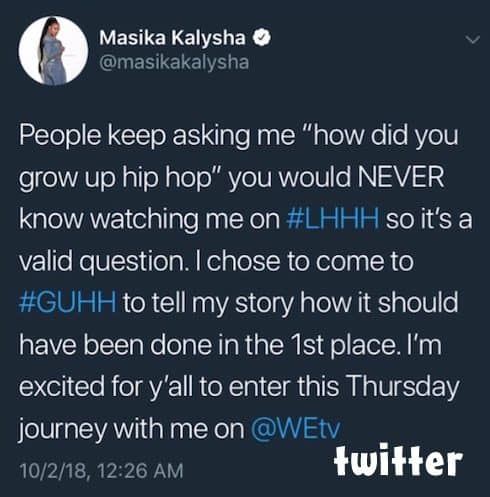 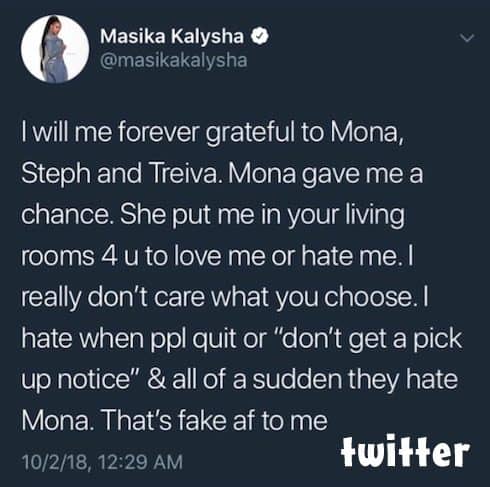 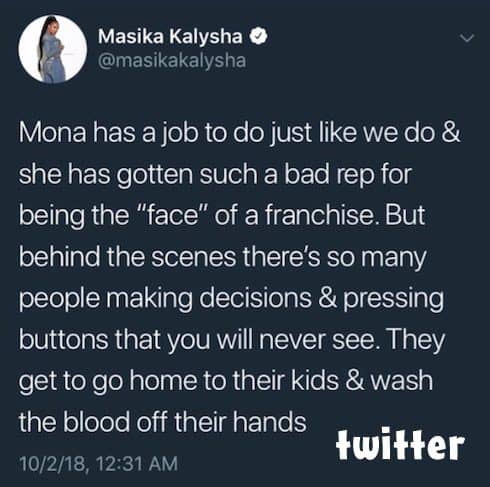 And of course Masika concluded on a positive note — by reminding her followers to keep up with her on a brand-new show:

On that note, we’ll remind you that you can witness Masika’s Growing Up Hip Hop Atlanta debut for yourself when the Season 3 premiere drops tonight at 9 on WE tv.