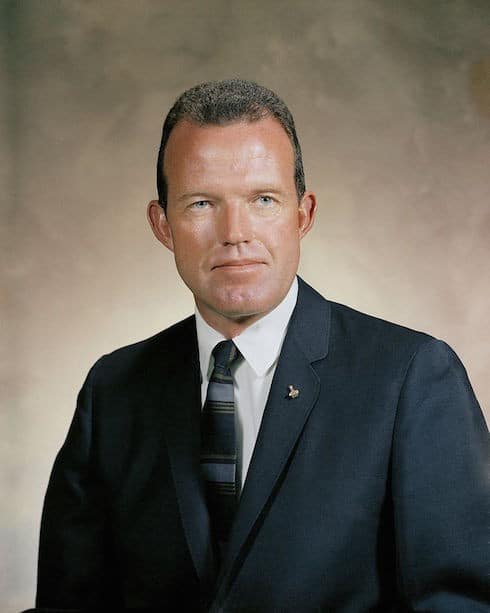 Cooper’s Treasure, the ridiculous and awesome story of a real-life astronaut treasure map (it’s impossible to get tired of that phrase), has raised newfound interest in Gordon Cooper, the Mercury Seven space explorer responsible for charting the map back in the 1960s. Cooper is probably still best-known for lending his name to several conspiracies in his later years–most notably the belief that the US government is covering up evidence of contact with alien life–and those conspiracies have tended to obscure some of the more intriguing and inspiring facts about the man’s life.

So, in an attempt at education as much as entertainment, we thought we’d put together a brief & hopefully helpful Gordon Cooper FAQ. If there’s a question you’d like us to tack on, let us know in the comments. 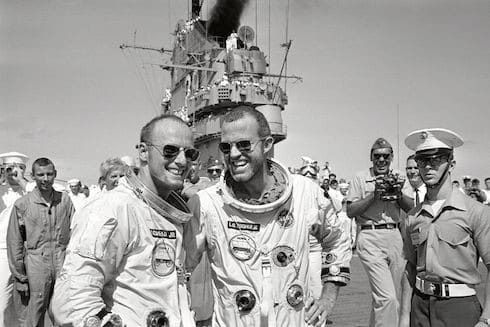 Gordon Cooper and Pete Conrad on the deck of the USS Lake Champlain after successfully completing the Gemini 5 mission in 1965. Photo via NASA

Where was Gordon Cooper born? Where did he grow up?
Leroy Gordon Cooper Jr. was born March 6th, 1927, in Shawnee, Oklahoma. He attended elementary school and high school in the town, which then had a population of about 23,000. About two months before his 1945 graduation, though, his father–a World War I vet–was called back into service, so Junior went with Senior to Murray Kentucky and finished his high school education there.

After that, Cooper wanted to be a military pilot. But, because neither the Army nor the Navy were taking new flight candidates, he joined the Marine Corps upon graduation. After the Second World War ended, Cooper transfered his commission to the Air Force; he began flying in 1950, and logged more than 7,000 total hours of flight time before becoming involved with the space program. 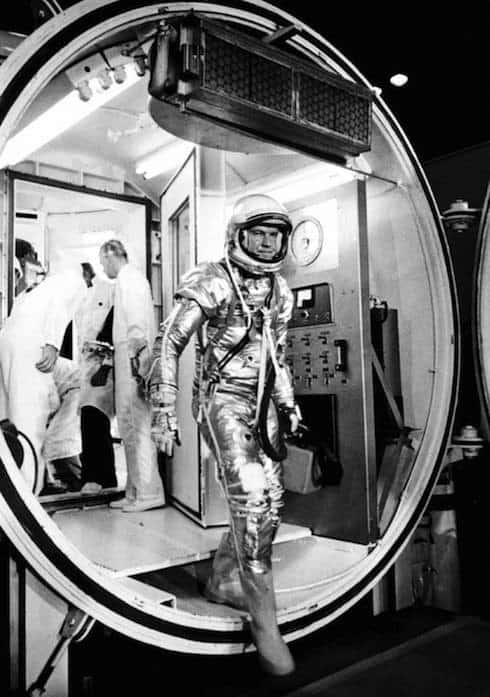 Gordon Cooper after completing a five-hour altitude chamber training session in January of 1963, in preparation for the Mercury Atlas 9 mission later that year. Photo via NASA

Where did Cooper go to school?
Because of his military career, Cooper attended several different colleges and universities before getting his degree. He took a year’s worth of night classes at a University of Maryland extension while stationed in Germany with the 86th Fighter Bomber Group in the early 1950s. Then, upon returning to the United States in 1954, Cooper attended the Air Force Institute of Technology at Dayton Ohio’s Wright-Patterson Air Force Base. In 1956, the AFIT awarded Cooper his bachelor’s degree in aeronautical engineering.

One other item of educational note: in his earlier years, Cooper was heavily involved with the Boy Scouts, and finished his time with them as a Life Scout–the organiztion’s second-highest rank.

How tall was he?
Cooper was a product of the time: he stood 5′ 8″ and weighed 155 pounds in his heyday. His personality, on the other hand, was far larger. Consider the following anecdote from former NASA Flight Director Gene Krantz, who recalled the first time he met Cooper in his book Failure Is Not An Option:

After the plane rolled to a stop…a shiny new Chevrolet convertible wheeled to a halt just beyond the wingtip. An Air Force enlisted man popped out, saluted, and held open the car’s door for a curly-haired guy in civilian clothes, a fellow passenger who deplaned ahead of me [and offered me a ride to Cape Canaveral].

After clearing the plane, he peeled into a 180-degree turn and raced along the ramp for 100 yards, my neck snapping back as he floored the Chevy. I had never driven this fast on a military base in my life. I was thinking I had hitched a ride with a madman, or at least someone who apparently had no concern about being pulled over the Air Police for speeding and breaking every regulation in the book.

Hitting the highway, he made a wide turn and a hard left, burning rubber. In no time, he had the needle quivering between eighty and ninety miles an hour. After a joyful cry of ‘Eeeeee hah,’ he turned and offered his hand, saying, ‘Hi, I’m Gordo Cooper.’ I had just met my first Mercury astronaut. 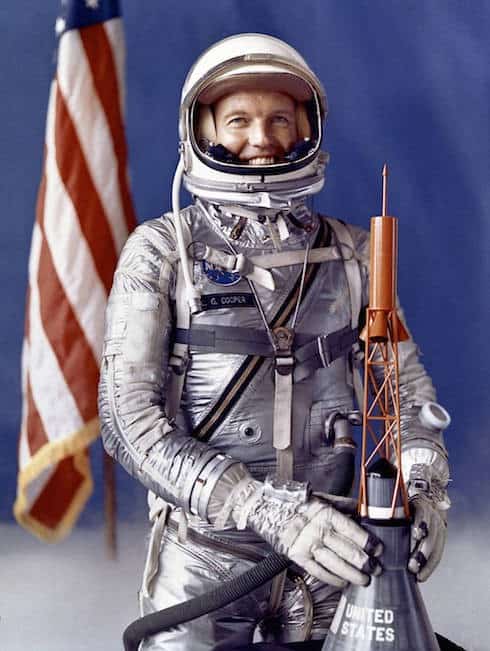 Cooper with a model of the MA-9 rocket. Photo via NASA

How did Gordon Cooper die? And where is he buried?
Cooper passed away on October 5th, 2004. According to his New York Times obituary, Cooper died of natural causes at home in Ventura, California. At the time, he was survived by his second wife, Suzan Taylor, who he married in 1972, along with their daughters Elisabeth and Colleen; and, from Cooper’s first marriage (to Trudy B. Olson), by his daughters Camala and Janita. (Janita Lee Stone has since died, as has Trudy B. Olson.)

As for Gordon Cooper’s grave–well, what else would you expect for the man but a burial in space? Celestis, a company that specializes in shooting the cremated remains of your loved ones into orbit, intended to do just that with Cooper’s ashes–along with those of NASA engineer Bob Shrake, and James Doohan, best known for playing Scotty on Star Trek–on a 2007 flight. But the spacecraft, rather ignominously, didn’t make it into space. A 2012 SpaceX flight finally got them there. According to Associated Press coverage, the “special container” containing the ashes of the three men was expected to “remain in orbit for about a year,” and then burn up upon re-entry into the Earth’s atmosphere.

(Photo credits: How did Gordon Cooper die via NASA)