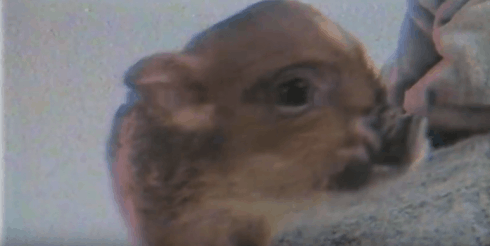 The star of Ariana Grande’s music video “breathin” is none-other than Piggy Smalls, the adorable pet pig she and fiancé Pete Davidson adopted recently. The song is about anxiety, and the sweet visuals of Piggy Smalls with a distorted VHS filter definitely amps up the calming effect of the song.

Peter Davison says Piggy Smalls was adopted within an hour of Ariana getting a whim to adopt a pig. “Can I just say, this girl, she was like, ‘I want a pig!’ And then an hour later it was just there,” Pete said. “Like I’m still trying to get a Propecia refill for the last two weeks and this chick got a pig in a f**king hour.”

Pete even has Piggy Smalls (spelled Piggy Smallz in this case) immortalized on his body.


P. Smalls is definitely well taken care of. Just last week Ariana sparked an uproar when she published a photo on Instagram hyping her new perfume “Cloud” for Ulta Beauty. In the background was a pink-lit crib that sparked a lot of baby rumors. It is for a baby, but not a human one. Piggy’s crib is decked out with a red heat lamp to keep him warm.

Along with Piggy Smalls, the couple share a number of dogs.