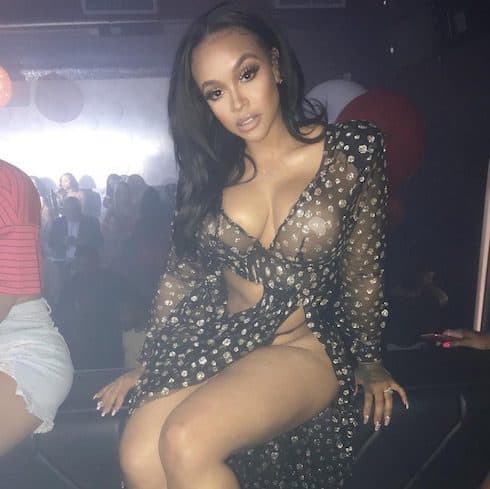 In a surprise development just before the season premiere, it looks like Masika Kalysha may have actually quit Love & Hip Hop Hollywood. But is Masika Kalysha on Growing Up Hip Hop? According to several new reports, she’s taking her talents down to Atlanta for the southern spinoff of the popular WEtv show.

We first reported on the possibility of Masika joining the GUHHATL cast earlier this month, as part of our ongoing investigation of whether Masika was teasing her fans with her #WhereIsMasika retweets or if she’d actually gotten out of her contract. At the time, we noted that Masika appeared to have entered a development deal with Datari Turner, who is to Growing Up Hip Hop what Mona Scott-Young is to Love & Hip Hop. And rumors about Masika quitting the show have been swirling ever since a February report claiming she was “ecstatic” to be done with the show.

Now, the same site where those rumors originated is claiming that Masika is indeed done with LHHH — and that she’s already made the jump down Atlanta way. According to The Jasmine Brand, Masika “has officially left VH1,” and is “allegedly taking her talents to WEtv’s…Growing Up Hip-Hop: Atlanta.” 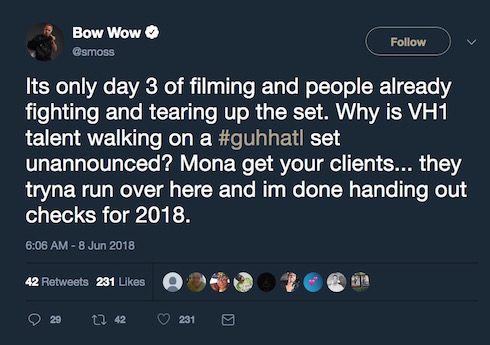 As you can see from the screengrab, Bow Wow tweeted that cryptic message out on June 8th. It may or may not be a coincidence that June 8th is the exact same day Masika revealed she was now a “part of the team” with Datari Turner:

I don’t think they’re ready boss man @datariturner ??so happy to be a part of the team. Swipe ??

To be sure, it’s hard to believe that Masika Kalysha tore up a GUHHATL set in Atlanta at six o’clock in the morning, then hightailed it to the airport, got on a flight to LA (where the above IG post is location-stamped) and celebrated her newfound partnership with champagne and photo-ops. But it’s not an impossible chain of events — just a tiring one. And it’s also possible that Masika’s photos were taken a day or two before she shared them, if not longer.

Regardless, we don’t have long to wait before finding out if Masika is still on Love & Hip Hop Hollywood. The LHHH Season 5 premiere drops Monday, July 23rd at 8 PM on VH1.

John Sharp is a Starcasm’s chief editorial correspondent-at-large. Send tips by e-mail at john@starcasm.net or on Twitter at @john_starcasm.

VIDEO LHHH Masika Kalysha explains the origins of her baby’s name, begins to exert her independence from Fetty Wap