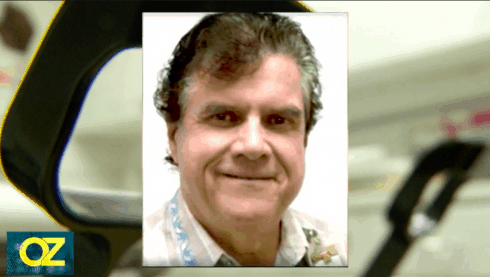 Dr. George Tyndall was the only gynecologist at the University of Southern California for almost 30 years. He’s currently facing charges of sexual assault by hundreds of women. This week Dr. Oz‘s “True Crime Thursday” dissects this disturbing case.

The allegations against Dr. Tyndall date back to the 1990s, and include inappropriate touching, taking photographs of genitals and making suggestive and crude comments about their bodies during examination. Dr. Tyndall no longer has his medical license and stopped working at the University in 2016 but denies all wrongdoing.

Just this past summer over 50 more women stepped up to sue Dr. Tyndell, taking the number of his accusers to over 200. The University hotline says they’ve received over 400 calls about the former gynecologist.

Dr. Oz notes that if other doctors and nurses knew about Dr. Tyndall’s allied misconduct, it was their duty to say something and stand up. Some of the women speaking out against him now said that they immediately complained about his behavior while others said they remained silent because they were not familiar enough with gynecological procedure to know what was not appropriate.

Dr. Tyndall was never in the examine room alone, and many were alarmed with the amount of photographs he took for research. He would also sometimes show photographs of other patients to patients.

He is currently adamant that he did not sexually abuse his patients, and everything he did was for legitimate medical reasons. He is currently not being criminally charged, but is being civilly sued. 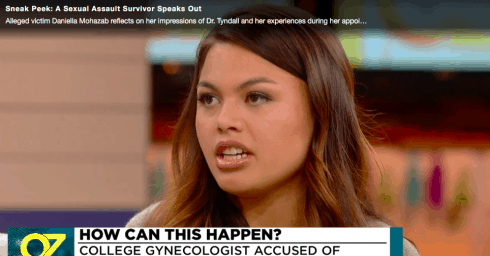 Daniella Mohazab, a former patient who is currently suing Dr. Tyndall through her lawyer Gloria Allred, appears on the Dr. Oz show today to explain her experience. He first made sexually suggestive comments about the sexual proclivities of her race and then watched her undress in the examine room while smiling.

He then conducted the examine without gloves. At the time Daniella says she didn’t know enough at the time to realize it was a red flag for a doctor to perform a pelvic exam without gloves.

Downton Abbey‘s sixth season will be its last: Long live the King, or off with its head?

AMERICAN HORROR STORY Who is Michael Langdon and what is The Cooperative?