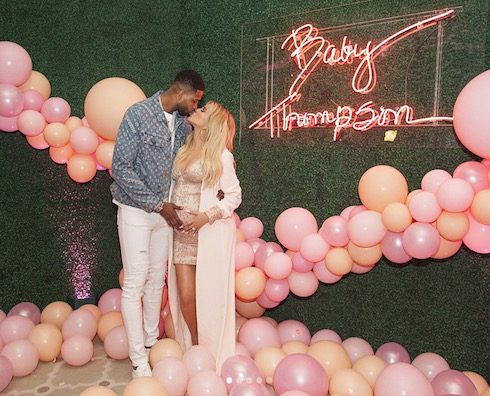 Khloe Kardashian and Tristan Thompson are officially a couple again — but why did Khloe take Tristan back at all? The 33-year-old first-time mom apparently decided to try and make it work with her baby daddy after waging a fierce and successful PR war, then dropping a list of conditions in Tristan’s lap when he waved the white flag.

Earlier this week, Tristan tried to gain the upper hand when one of his reps planted a story about how it was actually *he* who’d given demands to Khloe. The story went that despite getting caught cheating on his pregnant baby mama (a number of times, it turned out), Tristan felt he hadn’t actually done anything wrong, and that he was getting dragged by Khloe’s legions of followers without cause. So, that story went, it was really Tristan who told Khloe his requirements for letting her stay with him.

But Khloe, who’d been on the verge of breaking up with Tristan a number of times over the past few weeks, knew she always had public opinion on her side. (It didn’t help that her reps had already established the notion that Khloe had been “stuck in Cleveland” for weeks, both before and after True’s birth.)

So Tristan, true to his NBA form, backpedaled in a hurry. His people made sure to get out Tristan’s comments in the just-released “Road Trippin'” podcast about how having a daughter “changed him. (Tristan also has a two-year-old son, Prince, with ex-girlfriend Jordan Craig.) You can hear those remarks for yourself, starting at the 14:24 mark in the embed below:

In response to the question “Do you notice a difference already, between having a boy and a girl?”, Tristan has this to say:

Which is…fine? Like, it’s not especially heartwarming — and the fact that he treats babies and toddlers according to gender norms even though they’re both equally vulnerable is a separate thing — but it sounds like he really does love his kids. And that’s a start, if you’re a PR rep looking to change a narrative about how your client is a no-good cheater forever and ever until the end of time.

And so, shortly after that podcast went live, ET revealed that Khloe is “cautiously” taking Tristan back. According to their anonymous source, Khloe “took some time away from Tristan to really think everything over,” and likewise “had some time away from her family to consider everything without outside influences.”

Per their take, what it all comes down to is “do[ing] what’s best for her newborn daughter, True.” And, apparently, Khloe thinks that means “giving Tristan another chance because she thinks [she] and Tristan can make it work.”

But the real confirmation came via Kardashian home network E!’s lengthy feature on the drama between the two over the past month. It’s the most in-depth look yet at the fractures in their relationship, and it likewise answers the question “Why did Khloe take Tristan back?” with the most detail:

After agonizing over the situation for nearly a month, Khloe landed on a simple truth. “She can’t imagine being a single mom and giving up her dream life she had planned with Tristan,” surmised a third source. Mind made up—and a few conditions for the reconciliation laid out — she invited the 27-year-old NBA champ back into the $1.9 million lakefront Ohio spread he purchased in 2015. “People make mistakes,” notes the third source, “and she has found it in her heart to forgive him.”…”He made a promise to Khloe and it was enough for her to take him back,” says the confidante. With conditions. The source says she set a series of guidelines and boundaries for their fresh start “to make sure she is not embarrassed again.” But she’s convinced the 6-foot-8 Toronto native will rise to the occasion. “He has vowed to change,” says the confidante, “and she feels that he has learned his lesson.”

If you’re interested in the Khloe and Tristan drama even for tawdry reasons (not that there’s anything wrong with that), E!’s article is a must-read. In addition to serving as a more or less official confirmation that Khloe and Tristan are back together, it reveals a boatload of previously unknown details about their relationship. A brief rundown:

-Khloe kicked Tristan out of his own home; he’s been sleeping at “a nearby set of apartments” for the last month
-Khloe is ready to return to Calabasas as soon as True is “cleared to travel,” and may have dangled the “complete nursery” and “plethora of experienced babysitters” she has set up as a threat intended to whip Tristan back into line
-The rest of the Kardashians are “being supportive” of Khloe’s decision, though they “don’t agree” with her

Finally, Khloe also knows she’s raised the stakes for Tristan, since “all eyes” — the same ones he tried to claim were judging him unfairly — “will be on him” as long as the two of them are together.

(Photo credit: Why did Khloe take Tristan back via Instagram)