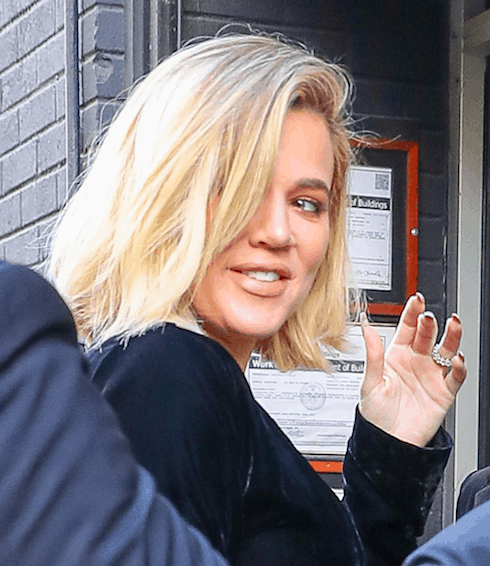 Khloe Kardashian and Tristan Thompsons’ reps are working overtime in a PR battle reminiscent of last year’s extended bouts between Kourtney and Scott Disick. The prize is the future of their relationship together — and it’s one that Khloe appears to be close to winning.

The two have been on the verge of splitting up ever since Tristan’s cheating scandal and Khloe’s water broke at almost the exact same time last month. And counter-rumors have swirled since they appeared in public together for the first time since the allegations against Tristan surfaced. (Khloe had been to one of Tristan’s basketball games since then, though that’s not exactly the same thing.)

But in the latest battle of the tabloids, it was Tristan who struck first. Anonymous sources close to the Cleveland Cavaliers forward put out a story claiming that Tristan felt he’d done nothing wrong, was being savaged unfairly — and had a list of demands for Khloe to agree to before he’d consider continuing to be with her.

“Tristan continues to insist he’s done nothing wrong, and blames Khloe’s family for exaggerating his womanizing and trying to ruin his reputation,” said the insider, who further explained that Tristan has “agreed to stick around for now, but only if the family stops spreading stories, and he gets cut into Khloe’s portion of profits for the show.”

Finally, Tristan allegedly asked “Khloe to let him see True any time he wants and insists she should fly out to meet him where he is,” since “He can’t just jump on a plane to L.A. when he’s got a game coming up.”

But the backlash to that report was swift. First, the record correctors over at Gossip Cop put the kibosh on Tristan’s spin, saying that the only “correct aspect” of the story is that Khloe Kardashian and Tristan “are indeed back together and staying as a couple” for the time being. (Though Gossip Cop’s corrective didn’t mention it, it’s believed that the Cavaliers’ NBA playoff schedule is a factor in Khloe’s short-term decision-making.)

GC’s article also pointed out that a competing article by Kardashian home network E! had already taken the opposite tack, alleging that it’s Khloe who has a list of demands for Tristan. And E!’s article, though maddeningly short on specifics, is nonetheless more straightforward than the one Tristan was responsible for.

Per E!’s insider, Khloe is “crushed by the scandal” Tristan brought upon her and their infant daughter True, but still “desperately wants things to work and wants to have a complete family.” To that end, Khloe “has definitely set guidelines and boundaries for their new chapter” — and Tristan has responded by “promis[ing] many things to Khloe” and “trying to make her happy again.”

The truly frustrating thing about the E! story is that the Kardashian insider responsible didn’t mention any of Khloe’s alleged “guidelines and boundaries,” nor any of the “many things” Tristan has promised. Which means we can speculate all day long (She could want wild sex stuff! He could promise to do more of the wild sex stuff she likes!), but never actually get anywhere. The insider did salvage the matter somewhat, however, by letting it slip that Tristan and Khloe are living together in Cleveland once more.

A final item of note comes from one of Us’ latest articles on Khloe Kardashian and Tristan’s relationship. *Their* insider insists that Khloe, who has been in Cleveland since mid-March and who recent reports suggested felt “stuck” in the city, has always intended to stay for a full three months.

If that’s true, Khloe won’t be back in the Kardashians’ Calabasan kingdom with the family’s newest addition until the end of June. Whether Khloe and Tristan are back together or not, keeping baby True away from the rest of the family for so long is not going to make Tristan look good in the Kardashians’ eyes, even if Khloe was the one who made the decision to stay away.