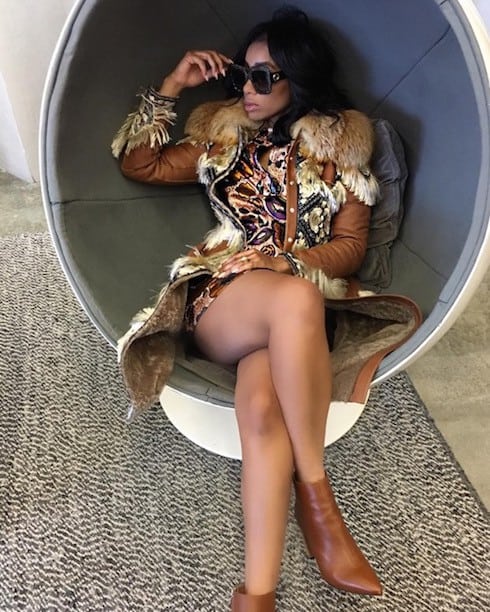 Tommie and Meek Mill have only allegedly been together for a short time, but their relationship has been red-hot. According to rumor, they’ve either been head-over-heels in love with each other or fighting so crazily that friends wonder how they could possibly stand each other. And a new report suggests that the couple has caught the attention of Love & Hip Hop Atlanta producers, who might be angling to feature the relationship on Season 6 of the show.

Rumors about Tommie and Meek Mill hooking up go back to the beginning of this year, beginning with an apparent mutual attraction they explored after Meek split from Nicki Minaj. Hollywood Life lent credence to a MediaTakeOut item by quoting an alleged insider who said “Yes, [Tommie]’s seeing Meek. It’s still early, but she sees potential for something serious.” Apparently, Tommie’s hard break with Scrapp DeLeon left her “single and ready to mingle,” and when Meek went back on the market, she jumped at the chance to get with him.

However, it seems the current Love & Hip Hop-related drama between Nicki and Remy Ma might have found its way into Tommie and Meek Mill’s relationship, since the latest tea is that they might have already split. A string of cryptic tweets from one of Tommie’s Twitter accounts has fans wondering if she’s directing her ire Meek’s way–and this all went down just as Nicki earned Remy’s acrimony in the form of much-lauded diss track “Shether.”

I needed a man connection ?

However, it’s also worth pointing out that Tommie might not even be in charge of that account anymore. Her official VH1 bio links to another, less-followed Twitter account, and the fan favorite is likely going to up her social media game once LHHATL Season 6 drops.

And it’s also believed that the upcoming season of LHHATL will go into more detail about the surprise relationship between Tommie and Joseline, which was only hinted at during Season 5 (and only confirmed off-camera).

As for Tommie and Meek Mill, fans don’t have long to wait to find out whether the rumors will be confirmed on the show: Love & Hip Hop Atlanta Season 6 drops Monday, March 6, on VH1.

RELATED: LHHATL Tommie confirms hookup with Joseline: “What that mouth do”