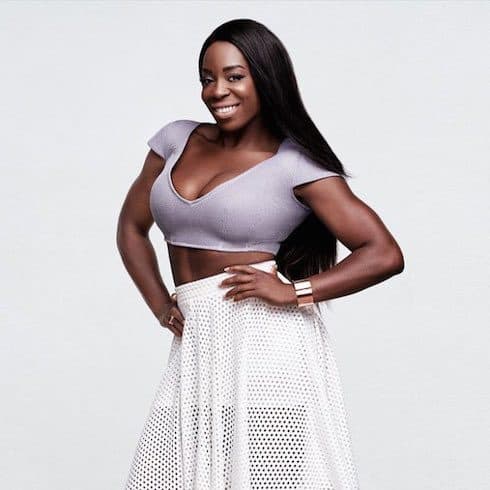 New cast members are the norm where reality TV is concerned — so who is Ogom from Basketball Wives? The show’s latest edition is also one of the intriguing additions it’s ever made: Ogom Chijindu — who tends to go by “OG” (pronounced “Ochee”) is a model, fashion designer, makeup artist, and event planner. But her day job is a professional football player as well-known for twerking on her opponents’ heads as she is for her outspoken anthem protests and support of Colin Kaepernick.

But if she’s best-known for anything, it’s got to be the twerking incident. So we’ll dispose of the suspense and get that particular detail out of the way up front 🙂 In 2013, Ogom, a cornerback for the Los Angeles Temptation of the Legends Football League, went viral after tacking Riki Creger-Zier of the Seattle Mist, then letting loose with a fierce twerk atop Creger-Zier’s head as the woman attempted to get up.

It should come as no surprise that the twerk ‘heard round the world is the very first clip in this compilation of Ogom’s finest moments on the field:

Ogom’s official player bio for the Los Angeles Temptation states that she’s 5’7″ and weighs 154 pounds, meaning she’s the ideal size for a cornerback. And, as she explained for the Fontana Herald-News at the beginning of that same season, Ogom really likes playing football.

“I love hitting girls,” the California native told the paper. “I know it sounds mean, but it’s legal violence and nobody can tell me I can’t do it. So as long as it’s legal, I’m going to keep going out there, knocking girls down.”

The 2013 tackle-and-twerk was hardly the last time that Ogom made headlines for a big hit. She found herself on the receiving end of less-than-favorable coverage after a hard hit and post-tackle celebration led to a bench-clearing brawl during a Temptation-Atlanta Steam game in 2016:

Given her athleticism and personality, it isn’t surprising that Ogom from Basketball Wives is not a *complete* stranger to reality TV. Back in 2014, she appeared on the second-ever episode of Steve Austin’s Broken Skull Challenge. Among the many challenges Ogom faced? Dragging huge weights in wheel-less wheelbarrows across the scorched earth of the California desert:

So what brings Ogom to Basketball Wives?

According to OG cast member Jackie Christie, viewers should expect Ogom Chijindu to act as something of a wild card during Season 7. Exactly which side of Ogom we get see seemingly depends on how well her fellow cast members can keep her in check.

“We’re holding [Ogom] back,” Jackie explained before the season began, “because we know if we let her out the cage, that lion’s gonna roar.”

Of course, we already know that Ogom is perfectly comfortable speaking her mind no matter who’s listening. Last year, as the NFL season got underway and the national anthem protests and counter-protests raged, Ogom shared her thoughts on the matter with TMZ Sports. She sparked a minor firestorm by saying that not only were the players’ protests justified, but, because the players were kneeling, they didn’t go far enough:

We’re supposed to have a First Amendment right, is that not correct? So for someone, anyone, I don’t care who it is, to tell me I have to sit, stand, kneel, or do any type of gesture, I feel is inappropriate….Who told Colin Kaepernick to start kneeling instead of sitting? I’m not trying to be mean….For me the image that is now out there is African citizens of America are on their knees in submission, while other ethnicities — be it white or any other race — is standing.

Ogom doesn’t appear to be married (which is hardly a rarity on the show), but she is a Basketball Boo. Her bae is legendary LA-area player Kwame Alexander, who currently plays for Club Atlético Goes of the Uruguayan Basketball League.

Here’s a pic of Ogom and Kwame together from a couple of years back: 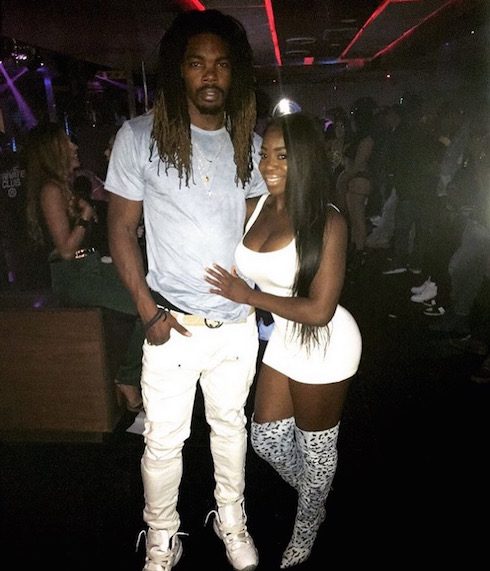 And here’s a more recent pair of photos of the two of them together, from the birthday bash Ogom threw herself this past February:

As we mentioned earlier, Ogom, like former Basketball Wives cast member Angel Brinks before her, OG is also a fashion designer of some note. Here she is modeling a bikini of her own design:

By extension, Ogom is also a fashion model with plenty of experience — to say nothing of Ogom Chijindu bikini shots galore:

After all that, don’t forget to watch Ogom in her new line of work when Basketball Wives Season 7 premieres Monday, May 14 at 9 PM on VH1.

LHHATL Joseline and Stevie are back together again (at least, they are when the cameras are rolling)