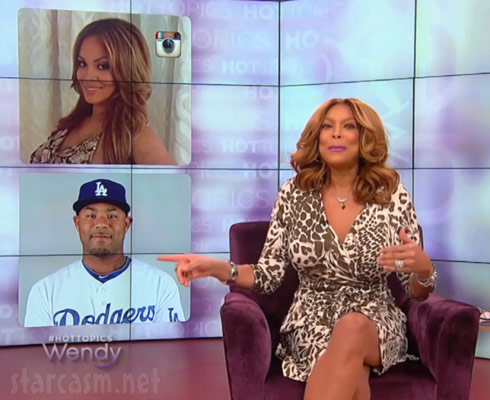 Baseball Wives star Evelyn Lozada gave birth to her and professional baseball player Carl Crawford’s son Carl Leo Crawford on Saturday, and of course the news came up during Wendy Williams’ “Hot Topics” portion of her daytime talk show. “I want to congratulate Evelyn Lozada,” Wendy said, before adding, “Evelyn gave birth to a cash register — I mean a baby boy — with her fiancé, the 142-million-dollar Carl Crawford.”

Needless to say, the comment was not well received by Evelyn, who took to Twitter earlier today to respond with allegations that Wendy Williams’ man cheated on Wendy in the second worst way imaginable — by buying another woman designer shoes!!!

Here are Evelyn Lozada’s tweets on the matter:

You know @WendyWilliams, I never bother anyone. I even bought you a beautiful bouquet of flowers congratulating your broadway debut…

Since u want me 2 open Dulce n LA. Maybe ur man can come 2 that store & purchase shoes 4 another woman like he did @ my Miami store. Bloop!

Oh…BTW…he purchased the Casadei suede over the knee boots triple platform just in case you wanted to know. #DontComeForMe #INeverBotherU

She finished her response with:

So far all is quiet from Wendy on the Twitter front, but it could be because she plans on addressing the issue on her next show.

And speaking of her show, here is a video clip of her “Hot Topics” segment that included the Evelyn Lozada baby diss followed by a transcript. (The segment in question starts right around the 5:50 mark.)

“I want to congratulate Evelyn Lozada. [Wendy actually pronounces it Lozado] Evelyn gave birth to a cash register — I mean a baby boy — with her fiancé, the 142-million-dollar Carl Crawford. I didn’t mean to make that cash register joke but you see why it’s easy to be said. Evelyn girl, congratulations. And Carl, like a lot of sports players and a lot of artists, he’s not a bad looking man, but he certainly wasn’t getting the likes of a Evelyn Lozada if he wasn’t playing baseball. You know what I mean? Do you understand what I’m saying? She upgraded him, and now that she’s had the baby, he’s upgrading her. If I were her, I’d be like ‘Miami who? Miami what?’ I would never go back to Miami.

“First of all, Evelyn’s a woman of a particular age. She’s like, 40 years old. Somewhere around there. Thirty-eight, forty, forty-one. Thirty-eight? Same difference. Same difference only because to me by the time a woman is 38 years old and has lived — now remember, her oldest, her only daughter Shaniece is in her 20s. So Evelyn was a young mother. Evelyn also birthed Shaniece out of a basketball player type of situation. That’s why she was on Basketball Wives’ Evelyn has clearly lived to the point that right now, this is perfect.

“Evelyn, I don’t know where you all are going to live, hopefully close to Dodgers Stadium. Get yourself a little apron and a little Epsom salt to make sure your man’s joints are all taken care of. Take care of your cash register. And ask him… And you know what Evelyn? Lose the telephone numbers of all those hatin’ basketball wives who are going to want to hate on your situation. I like Shaunie O’Neal who was the creator of Basketball Wives, but I would even lose Shaunie’s telephone number. I would start a whole new life as the queen of the castle.

“And by the way Evelyn, very smart to name the boy Carl Leo Crawford, Jr. just to make ol’ cash register over here feel well. And now, here’s what I’m thinking Ev. You should become involved in a lot of charity work and also talk to your man about opening you up another Dulcé. Except Dulcé Beverly Hills, not Dulcé Miami. That was her shoe store that she had, remember? But then she got involved in all the shenanigans on Basketball Wives. I guess, you know, she let the shoe store fall by the wayside, but there’s nothing wrong with a wealthy woman having some place to go every day Ev. You just go around and check on your workers. Yeah.”